The Masked Singer Season 3 premiere followed Super Bowl LIV Sunday — a touchdown of a lead-in if ever there was one — and got the latest iteration of the wacky reality singing competition off to a strong, if surreal, start. And yes, I know that by now I should be prepared for visuals like sexy llama dancers with bare midriffs… but as the season kick-off showed me, I was not. I really was not.

This season will feature 18 competitors. Without further ado, here’s a quick rundown of the first six singers’ performances. 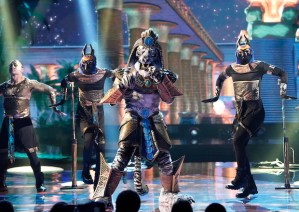 WHITE TIGER | The very tall performer inside the catsuit had several references to New England in his clip package and an odd energy to his rendition of Vanilla Ice’s “Ice Ice Baby.” Given that he chose a rap song (the “theme song for all white homies,” per Foxx), safe to say the guy can’t really sing. And it was hard to tell what was cornier: his dance moves or the roar near the end of his number. (My guess: Former New England Patriots tight end Rob Gronkowski.)

TURTLE | I was surprised at the vocal control, breathy though it sometimes was, that Turtle had while singing Seal’s “Kiss From a Rose.” And I know that some of the judges said they got a boy-band vibe from him, but the clues in his set-up video about grilling and surfing made me think that they’re way off track. (My guess: Summerland alum Jesse McCartney.) 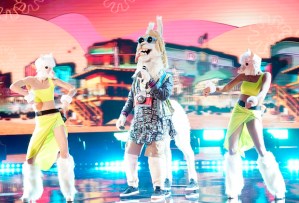 LLAMA | “You’re the only character in history with a strap-on booty,” Cannon observed of the wooly crooner, who seems like a big joker. How else can you explain his description of Ricky Martin’s “She Bangs” as a love song? “Oh my gosh, what is happening?” Scherzinger asked during the performance. “I don’t know,” Foxx replied, and if that doesn’t sum up Llama’s debut, I don’t know what does. (My guess: David Spade?)

MISS MONSTER | There wasn’t much to go on, clue-wise, in the shaggy lady’s intro. Hairpray? Keys? The numbers 10 and 11? Great. Anyway, she made up for it with her “Something to Talk About” by Bonnie Raitt, sung in a soulful, gravelly-in-a-good-way voice. (My guess: I had no clue, but Twitter is making me think it’s Chaka Khan maybe?) 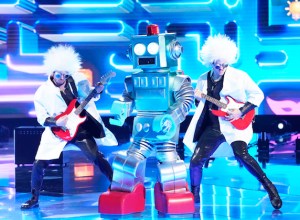 ROBOT | “I’ve always felt the need to put on a tough outer shell,” Robot told us in his video, which sounds like it would’ve been better for Turtle’s bit, no? There was a reference to a skateboard-vs-truck accident, as well, and a mention that Robot has had fame “in certain circles.” Given his kinda listless take on Lenny Kravitz’s “Are You Gonna Go My Way?,” not to mention that pretty unique voice, I think I know who it is. (My guess: rapper Lil Wayne.)

KANGAROO | Ladies and gentlemen, may I present this season’s wounded bird contestant? “I’m a survivor,” Kangaroo said in her video. “I recently lost a person who held my family’s heart together… I have to fight for my family and show them that bullies never win.” You get the gist. Anyway, her performance of “Dancing On My Own” by Robyn was pretty stellar, with a textured alto I won’t mind listening to for as long as she’s around. (My guess: Iggy Azalea.)

THE UNMASKING | Robot was sent home, and he was revealed to be Lil Wayne.

Now it’s your turn! Grade the season premiere via the poll below, then hit the comments with all your guesses!