Warning: This post contains spoilers for Thursday’s series finale of The Good Place.

Ready to climb aboard the Purple Train to Groovy City, The Good Place fans? You’ll be able to soon enough, you marshmallow cats.

NBC’s afterlife comedy capped off a four-season run on Thursday with an extra-large series finale, and series creator Michael Schur and executive producer Drew Goddard revealed a slew of fun inside tidbits about the making of the episode to host/cast member Marc Evan Jackson on the official Good Place podcast. First and foremost: Yes, a full version of Michael’s psychedelic tune “The Purple Train to Groovy City” — which we saw him working on for many Jeremy Bearimies — was actually recorded by series composer David Schwartz, and was originally planned to play over the finale’s closing credits, but “we didn’t have the time” to include it, Schur admits. The full song will be released online soon, though, Schur promises, so keep an ear out for that, my babies.

Read on for more behind-the-scenes secrets from The Good Place‘s series finale:

* Those of you hoping to see Adam Scott return as Bad Place demon Trevor: You did, actually. In the scene at the Interdimensional Hole of Pancakes when Michael is taking Tahani to the architects’ office, in the background, you can see Trevor still hurtling backwards through an endless void, Schur reveals.

* One character we didn’t see in the finale, though: Eleanor’s unreliable mom Donna, played by Leslie Grossman. “We tried really hard” to include her, Schur says, but Grossman was busy shooting a series for Ryan Murphy, “and we couldn’t quite make it happen.” 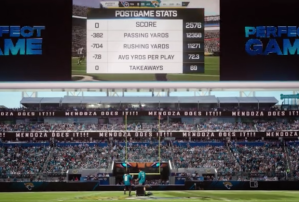 * Jason’s perfect Madden score is stuffed with Easter eggs: His rushing total of 11,271 yards is the franchise career total of Jacksonville Jaguars great Fred Taylor, and his total number of takeaways is — of course — 69. (Nice.)

* Jason was the first to walk through the door, Schur notes, because of his pure, simple soul: “Jason has always been the most intuitive of the four of them… he’s really kind, and he’s really sweet, and he’s really intuitive about emotion. That’s why it made sense to me that he would be the first person to get to the end. In a weird way, he had the shortest journey.”

* The scenes in the woods with the final door were shot in “a little glen of coastal redwoods” around San Francisco, and the arch of branches was actually left over from a recent wedding, which the set designers simply cleaned up and used nearly as-is. 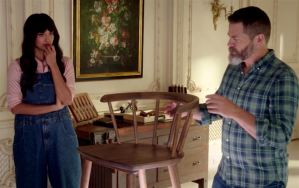 * Parks and Rec alum Nick Offerman was, in fact, playing himself in that woodworking scene with Tahani, not Ron Swanson. (Schur didn’t want to cross-pollinate the fictional universes of The Good Place and Parks and Rec.) Offerman, a serious woodworker in real life, requested a certain very rare and expensive chair to stand in as Tahani’s creation, Schur recalls, but the show couldn’t get it in time, and Offerman dismissed the chair they did get as “garbage.” He did add, though, that being an actor, he could just pretend that the chair is good.

* While shooting in Athens, D’Arcy Carden was recognized constantly by Good Place fans, which “blew her mind,” Schur remembers. She was even approached by a bartender who told her, “I am also not a girl, not a robot.” 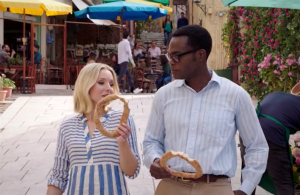 * No, your eyes weren’t deceiving you: The neighborhood in Athens where Eleanor and Chidi walk around does look a whole lot like the original Good Place neighborhood. That was intentional, Schur says — but them munching on Greek koulouri, which are a lot like the warm pretzels Chidi loves, was just a happy accident.

* Shooting in Paris proved to be difficult because of the constant crowds, but because former French President Jacques Chirac died during production, streets were blocked off, allowing them to shoot Eleanor and Chidi’s scene on the bridge virtually uninterrupted for two and a half hours. And that scene, aside from a late reshoot, was the final one shot for the finale. After the last take, Schur, who directed the episode, put his arms around Kristen Bell and William Jackson Harper and told them, “OK, now we’re done making the show.”