Bad news travelled slowly in Thursday’s Grey’s Anatomy. Two months after Maggie quit Grey Sloan (kidding — I know it’s only been days in Grey’s time!), Richard learned that his daughter had traded the operating room for the unemployment line. In other developments, Amelia broke it to Link that there was a chance that their baby wasn’t actually his, and despite the sparks flying whenever Cormac spoke with Meredith, she began to wonder whether she’d made a mistake by declaring herself dumped by DeLuca when all he’d actually asked her to do was take a hot minute and give their relationship some thought. But, of course, those are just the headlines. If you read on, we’ll get as deep into the nitty-gritty as Grey Sloan’s docs do a patient’s chest cavity during open-heart surgery! 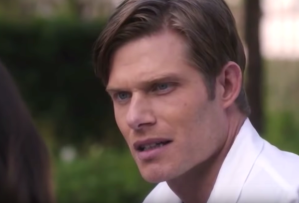 ‘SEATTLE IS KINDA WELL-KNOWN FOR ITS COFFEE’ | As “A Hard Pill to Swallow” began, Meredith was texting Cristina, who was playing coy about her “gift.” When the present in question entered the doctors’ lounge, Cormac put even greater distance between himself and his crankypants introduction at Grey Sloan by helping Amelia tie her shoe and offering Mer coffee. (I know it sounds simple, but the twinkle in his eye as he did it — as he does most everything — really sold it.) “That is a very well-wrapped gift,” Amelia cracked after he left the lounge. Seemingly determined to turn a blind eye to McWidow’s appeal, Mer grumpily re-untied Amelia’s shoe. (If they say romance is dead, that’s why!) Afterwards, Mer grumbled to DeLuca that she hadn’t liked being told to take some time, but — in Italian, she added — she missed him. She didn’t have to, he noted; he hadn’t dumped her. Outside the hospital, Amelia told Link that she was more pregnant than she thought, which meant that he might not be the father. “I don’t need a paternity test to know that I want to be with you, she assured him. “You have yet to make me cry. I’m in love with you, Link.” Even if Owen did turn out to be the dad, that wasn’t going to change.

Back at work after taking some time to process her recent miscarriage, Bailey teamed up with DeLuca to treat a mother of two named Suzanne (Suits’ Sarah Rafferty), who wasn’t recovering from her appendectomy as expected. She kept spiking a fever every night, therefore she couldn’t be sent home… which was where she was desperately needed since her girls’ dad had died only a year ago. In the pit, Cormac, who seemed not to even know who Cristina was, partnered with Mer to treat a 17-year-old who was coughing up blood. After some tests were run, the docs remained mystified. Elsewhere, Teddy wept to Owen that she’d lost her engagement ring. Though he allowed that his mom might kill her, it’d be OK — they’d find it. Elsewhere, Link, Jo and Jackson treated an idiot who’d capped a night of drinking at a local bar by swallowing a goldfish that turned out not to be a goldfish. While all this was going on, Richard showed up at Mer’s and suggested Maggie join him for breakfast. But upon seeing her disheveled state, he decided, uh, maybe they’d eat in — he’d cook. Which he could do, he added. A mess, Maggie didn’t want to accept his forgiveness for “killing” Sabi. “I’m useless and mean and awful,” she cried. She preferred to go back to him not being able to look at her. 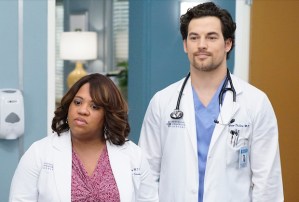 ‘YOU CAN LOVE HER AND BE MAD AT HER AT THE SAME TIME’ | Later, Bailey and DeLuca freaked out Suzanne’s kids — not hospital fans after losing their dad — by insisting on doing a CT and keeping her for another night. Before operating on the dude who’d swallowed the (surprise!) poisonous fish, Link assured Jo that he was cool with Amelia not having a paternity test; he liked Owen, and the baby would have, like, eight parents. Jo was stunned that Link could be — or could insist he was — so chill, and told him that he could be in love with and incensed with Amelia simultaneously. “Both things can be true.” Treating the blood-spewing teen, Cormac confessed to Mer that he always got testy this time of year. “It’s when I lost [my boys’] mom — cancer. So I hope we can start over.” Certainly, she understood. And soon, they also understood why the young jock had the lungs of a 60-year-old: He was vaping. After filling in the boy’s father and friends, Cormac deferred to Mer when she recommended a different course of treatment than he did. And by and by, Teddy and Owen discovered that Leo had swallowed her ring. Hey, at least he wasn’t an adult who swallowed a poisonous fish!

Back at Mer’s, Richard admitted that he hadn’t been able to look at Maggie after Sabi died not because she’d “killed” his niece but because he’d pushed her to operate. But it wasn’t his fault — at all, Maggie countered. She hadn’t asked the right questions, and because Pac-North’s protocol was different than Grey Sloan’s, her cousin was dead. “I was arrogant and blinded by emotion,” she said. And when she pleaded again to be left alone, her father complied. In the O.R., Mer’s course of treatment with the vaping teen didn’t work out, so Cormac leapt in with his. He’d been in a similar situation with his Swiss boss, a Dr. Yang — did he really not know her first name? Or any better than to tell her person that she’d been an absolute nightmare? Bailey and DeLuca ran into still more trouble with Suzanne, too. While she was getting an MRI, she began coding. Once she was stable, she reassured her petrified kids that she wasn’t sick like their daddy had been, and these doctors were going to figure out what was wrong. “Create a war room,” Bailey ordered DeLuca. “We are not letting this mother die.” After fish guy came out of surgery, his fiancée came roaring in and dumped him for his stupidity. “When somebody shows you who they are over and over,” she yelled in front of Link, “you believe them.”

‘FAMILY DOESN’T OPERATE ON FAMILY’ | Maggie thought that she’d gotten rid of her dad, but he came back with food. “Please just yell — be mad at me,” she begged him. She wanted all the punishment that was coming her way. Instead of RSVP yes to her pity party, Richard recalled that when he was temperamental as a kid, his mother would suggest they eat, then talk about it. So that was what he was doing with her. Once they’d had at least a little bite, Richard told Maggie definitively that Sabi’s death was his fault. He knew the rules, and he’d broken them by all but forcing his daughter to operate on her cousin. Maggie would settle the lawsuit with her uncle, letting him feel that some justice had been done by Sabi, and she’d never make the same mistake again. It happened to every doctor at some awful point or another. Back at Grey Sloan, Owen suggested to Teddy that they keep the ring in a safe for special occasions, and instead she’d wear a necklace with the whole family’s initials on it.

As Cormac outlined the long road to recovery that Darth Vaper faced, he reassured the kid’s dad that he wasn’t stupid for not realizing what the boy was up to, e-cigarettes are just evil. After riding Bailey all day, Koracick finally got an earful from her: She’d had a miscarriage, dammit, and she’d been doing some self-care. In response, he suggested that she light a candle. He and his ex had some experience with that, too. He still lit a candle for the children they didn’t have on what would have been their birthdays. (That’s the Tom we know and love.) Paged by Link to the plant room, Amelia was concerned. And kinda rightfully. He should’ve known from the start if there had been any doubt about the baby’s paternity, he said. Now he deserved to know. Everyone involved did. He wanted to be the guy to whom the paternity didn’t matter but, rather than shoot off his mouth, suggested they gather information and then figure it out. Finally, Mer responded to DeLuca’s text, but he wasn’t looking for a date, he wanted Grey’s help with Suzanne’s confounding case. And when Richard came home, Catherine expressed her skepticism that his discussion with Maggie had taken all day. She had to trust him if this was going to work, he said. “Who says this is working?” she replied before admitting, “Richard, I think it’s time for us to have a much bigger conversation.” Yikes.

So, what did you think of “A Hard Pill to Swallow”? Were you relieved that Amelia didn’t keep Link in the dark? Are you rooting for MerLuca or CorMer? Hit the comments.