Gary means well in this week’s A Million Little Things. And he actually makes some good points. But does he have to be such an off-putting jerk about it?

As a Magic 8-Ball would say, all signs point to yes, given how Mr. Mendez spends the hour yelling, fight-picking and punch-throwing until he winds up in the back of a police car. The worst part: His belligerence, born of a broken heart, may lead to more heartbreak for Rome and Regina.

I’ll explain it all as we review what goes down in “We’re the Howards.”

YOU HAD ONE JOB! | Sophie is still living with Rome and Regina, an arrangement that’s working out pretty well. “Is it me, or is this parenting thing not as hard as everyone says it is?” Rome asks his wife. Meanwhile, Delilah is at her house, trying to sleep-train baby Charlie, who is loudly disproving Rome’s thesis. 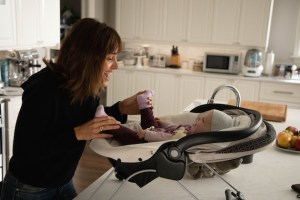 Rome and Regina spend most of the episode making a video that they hope will entice a pregnant mother to let them adopt her baby. They’re feeling really good about everything… until Sophie and a friend get really drunk during a study date that Rome and Regina OK’d.

While the teen is vomiting copiously in the bathroom (a little too good on the ADR there, Lizzy Greene). Rome calls Delilah to tell her what’s happened. D throws Charlie in a carrier and flies over, but Regina stops her friend from entering the apartment: The Dixon family’s “reset” won’t work if Delilah comes running every time Sophie pulls a stunt, Gina reasons. Delilah likens the process to sleep training, then thanks Regina and leaves. That’s great and all, but I’m trying to imagine my mom calmly accepting that her underage daughter had gotten drunk, then letting out a frustrated sign and serenely smiling as she allowed someone else to handle the repercussions. I can’t picture it. Such a scenario does not exist in my known universe. 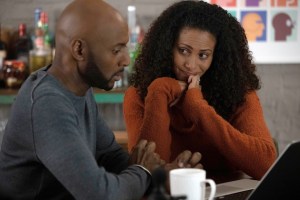 ‘WE LIVE IN TWO DIFFERENT BOSTONS’ | The next day, Sophie is hungover when Rome and Regina rouse her: She’s got a softball game, and they want to attend to get some footage for their video. The whole gang attends — because of course they do — so everyone is there when some racist jerk starts yelling at Rome for filming the game. For reasons we will get into in a moment, Gary is spoiling for (yet another) fight. So he starts pushing the racist guy around. The guy pushes back. Eventually, Rome and Gary are both in handcuffs in the back of a police car.

Let’s rewind a bit on Gary to see how he got here. After (yet another) random hook-up, Gary finds himself kicked out of bed and in the process of securing a ride home when his phone dies. He ducks into a nearby coffee shop but doesn’t have enough cash to make a purchase that will allow him to use one of their phone chargers, and the shop doesn’t accept credit cards. He’s stuck… until Eric appears out of nowhere and offers to pay for Gary’s banana.

How does Gary repay this kindness? By being a gigantic a–hat. He looks at Eric, sweaty from a run, and says, “Look at you, exercising with another man’s heart. You must be very proud.” Eric ignores the barb and apologizes for how things went down with Maggie, adding that he hopes he wasn’t a factor. “Aw, don’t be silly,” Gary snipes. “You split up Maggie and her mom, not Maggie and me.” As Eric leaves, don’t think that Gary doesn’t notice that the other coffee on his order is for someone whose name starts with “MA.”

Gary does some extensive research (aka looking past Page 1 of Google search results) and rushes to Eric’s music shop to confront him. “I know what you’re hiding!” he cries, noting that Eric’s fiancee’s family have filed a wrongful-death suit against him. Eric shouts that he and Maggie aren’t together, “but you know what we do talk about? We talk about what a mess you are. No wonder you wanted out.” Bring on the fisticuffs!

The two men tussle until Eric’s co-worker comes out from the back of the shop. His name is Max, and the coffee, Gary realizes, was for him. Gary leaves. And he thinks maybe he was all wrong, until the softball game when a look from Delilah — who knows that Maggie and Eric kissed — sends him spiraling again. And that’s when he runs into the racist harassing Rome.

“What the hell were you thinking?” Rome demands as they sit, cuffed in the cop car. Rome says he’s always hyper-aware of when he’s the only black man in a crowd — such as he was at the ballgame — and he’s angry that Gary’s attempts to defend him could hurt the adoption process. Gary counters that he’s half Mexican (“passing for white!” Rome observes), but the other man isn’t swayed. “It’s one thing to mess up your life, but now you’re messing with mine,” he says. The police eventually let Rome go. Gary, however, is arrested and brought to the station. 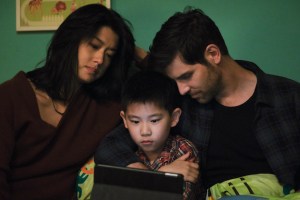 ‘I’M OUT’ | Meanwhile, Theo starts a fight at school. Katherine and Eddie can’t figure out why their sweet little 80-year-old boy would do such a thing, so they ask Maggie to chat with him. Turns out, Theo is a little messed-up about all the upheaval in his life in the past year; when desk-switching day arrived in his classroom, it pushed him over the edge.

To assuage their son’s fears, Eddie and Katherine walk him through the latest change in their lives: Though Eddie’s old record label isn’t interested in the songs he submitted, they do want him to shepherd a young artist named Dakota. And though he originally balked at the idea, a pep talk from Katherine helped him see how it might be an apt, new career track for him.

Speaking of Katherine: Gary calls her to come bail him out, but throws a small fit when he sees that she brought a very worried Maggie with her. Katherine reminds him that she and Eddie chose him as Theo’s guardian but they made a mistake: “How could you possibly take care of him when you can’t take care of yourself?” Then she makes him find his own ride home. (Hope that phone is charged by now, Gar!)

Back at his place, Gary gathers a bunch of items from his relationship with Maggie and throws them down the garbage chute. Afterward, though, he finds the Post-It with “I’m in” written on it, and he seems very regretful about a great many things.

Now it’s your turn. What did you think of the episode? What are the chances the run-in with law enforcement will hurt Rome and Regina’s adoption efforts? Sound off in the comments!