Considering its reputation as a wicked little town, Riverdale‘s next musical actually makes perfect sense. Kevin Keller will lead a production of Hedwig and the Angry Inch on Wednesday, April 8 (The CW, 8/7c), TVLine has learned — and it just might be his most controversial show yet.

“After the previous debacles of Carrie and Heathers, Kevin has decided to revive Riverdale High’s tradition of hosting a variety show,” reads the episode’s official synopsis. “But when Mr. Honey forbids him from performing a number from Hedwig and the Angry Inch, Kevin and our gang rally against their principal — by each performing a number from Hedwig, turning the variety show into a full-fledged musical that, as always, reflects our characters’ inner lives and struggles. Amidst the drama, one forbidden ‘showmance’ begins to blossom.”

“Musical episodes have become a yearly tradition on Riverdale, but this year, we wanted to try something different,” creator Roberto Aguirre-Sacasa said in a statement. “When we heard that Stephen Trask was a fan of Riverdale, we thought, ‘Is there a way we can do Hedwig and still have it tie into the stories we’re telling?’ Doing a deep dive, we figured out a cool way to use classic songs like ‘Wicked Little Town’ and ‘Midnight Radio’ that made total sense and are just amazing and iconic. And bonus, Hedwig is literally Cole’s favorite musical!”

Peruse the flyer below to see which of your Riverdale faves will be stepping up to the mic, then drop a comment with your hopes for the show’s Hedwig production below. 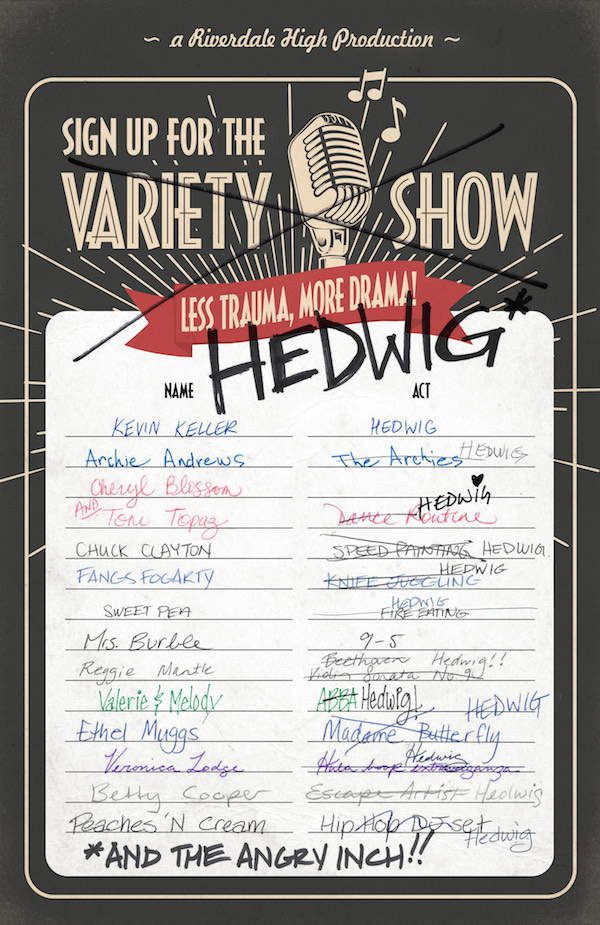