The Good Doctor this week carefully peeled back the layers of Morgan’s hardened exterior (though not too much) to reveal a woman who so desperately wanted her mother’s approval.

While Shaun was focused on giving Carly a “parade,” Morgan was hard at work, determined to save the life of her difficult-to-please parent: famed painter Caroline Reznick (Smallville‘s Annette O’Toole), who was admitted to St. Bonaventure with potentially fatal clusters of small blood vessels in the brain. It was her daughter who ultimately convinced Glassman to return to the operating room and perform the minimally invasive (but highly experimental) procedure that saved Caroline’s life — but at the end of the hour, the artist still couldn’t bring herself to admit that she was proud of Morgan and her accomplishments as a doctor.

Along the way, Morgan also reconnected with her brother Ariel (Downton Abbey‘s Allen Leech), a noted sculptor who’d always been tight with Mom, but not with his sister. Below, Morgan’s portrayer, actress Fiona Gubelmann, dissects the Reznick-centric hour and reveals which scene was most arduous to shoot.

TVLINE | Morgan is hurt because she hasn’t lived up to her mother’s standards. But why did she lie to her friends and colleagues about who her family really was?
Morgan is very guarded. She doesn’t like to be vulnerable. She doesn’t want to share [her pain] with her coworkers because she doesn’t want them to see that side of her… She describes her family in a way that she wants them to be. Claire kind of calls her out on that, and when she does, Morgan has the realization that, yeah, that’s what she’s been doing. That’s her way of coping.

TVLINE | So much of the first half of the season was about Morgan getting Claire to open up about Breeze’s death and preventing her from spiraling out of control. In this episode, the tables were turned, and it was Claire who had to keep Morgan at bay when her feelings toward Mom threatened to clout her medical judgment. What was it like getting to play that dynamic in reverse?
It was so much fun. We have seen Morgan grow and change over the course of her relationship with Claire, [and] they’ve started to rub off on each other a bit.
This whole season [has been about] getting to find the moments in which Morgan is vulnerable and a bit softer — and it’s a fine line: I have to make sure that I don’t get too soft and play Morgan with too much heart, because [then she becomes] Claire. But it’s also been really great to get to see Antonia [Thomas] bring a bit of edge to [Claire]. She’s such a talented actress, and getting to see all the different levels and choices that she brings and makes, it’s been really exciting. 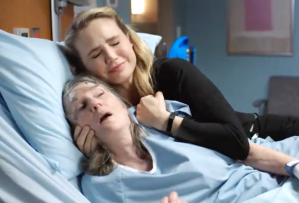 TVLINE | Talk to me a bit about what it was like shooting that scene where Morgan induced Caroline’s seizure by recounting painful childhood memories, and eventually resorting to reading criticism of her Mom’s life work.
I haven’t seen the scene yet, and I’m a little anxious to watch it… Even just thinking about it now gets me a bit emotional. To put yourself in a situation where you’re torturing someone, and you know it’s going to help them, but it’s still hurting them… Just putting myself in that emotional state was very challenging, and embracing her at the end of it was just so hard to do. But I was so lucky to work with Annette O’Toole, who is such a talented actress. And Doris Egan, who wrote the script, is so brilliant. It was such a beautifully layered scene with all these incredible moments. 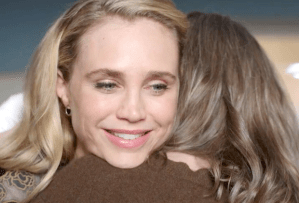 TVLINE | Which scene was most difficult to shoot: When Morgan provoked Caroline’s seizure, or when Caroline told Morgan that she owed her everything, but still couldn’t bring herself to admit that she was proud of her daughter?
I would say the scene where Morgan triggered the seizure was harder, because that’s such an emotional journey. She’s just trying to jab and poke at her, but then there’s a switch that happens and Morgan gets very upset. Mom is having a seizure and Morgan is doing everything she can to save and protect her, and she has to nurture and take care of her mother in a way that her mother has never done for her before.. But the scene [at the end] where she calls me the “little plodder” broke my heart. Morgan has this extreme high — this moment where she feels like she has finally gained her mother’s acceptance, only to have it ripped away from her in such a cold way. Both [of those scenes] were pretty sad and not fun to shoot. [Laughs]

TVLINE | Correct me if I’m wrong, but Morgan never revealed to Caroline that she has inherited her rheumatoid arthritis…
Correct. 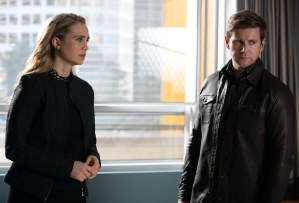 TVLINE | Now that Morgan has been able to identify that her competitive nature stems from her need to be compete with her brother, might we see a change in her demeanor moving forward?
Oh, definitely not. [Laughs] At the end of the day, Morgan is who she is, so that’s always going to be there, and she has other things that she’s battling with right now… She’s a very competitive, driven woman, and she enjoys the competition to some extent. We’ve never seen Morgan be so competitive that she does something unethical to take out one of her competitors, and she’s also always been completely forthright and honest about the fact that she’s competitive, so I don’t think she views that as something wrong.

TVLINE | What can you tease about Morgan’s trajectory in the last five episodes of the season?
It’s gonna be a pretty rocky road for Morgan through the end of the season — so much so that I wonder about Morgan’s future, and I think it’s going to be a really exciting, edge-of-your-seat ride.

What did you think of The Good Doctor Season 3, Episode 13? Grade the Morgan-centric hour via the following poll, then hit the comments with your reactions.