Has there ever been a Power character more slippery than Rashad Tate? In light of the way things play out in this week’s episode, I’d argue that the answer is no: Dude slides out of so many potentially career-ending/throw-you-in-jail situations, I’m starting to think he’s composed entirely of Teflon rubbed in butter.

If you want the quick take-away from the hour, it’s this: Tate didn’t kill Ghost, but he came a lot closer than anyone else has so far. And while his involvement should’ve landed him in prison, it had the opposite effect: By the end of the episode, he’s on track to become New York’s next governor.

Read on for the highlights of “Reversal of Fortune.”

DOWNWARD SPIRAL | While drunk at a bar and lamenting the impending end of his campaign, Tate calls a hitman and tells him to come to New York. There’s “a mess I need cleaned up,” he slurs. The bartender calls Tate’s brother, Kamal, to come get him, and a hungover Tate wakes up in Kamal’s home the next morning.

Kamal works for the New York Police Department, has a wife named Simone and a son named Elijah. Tate seems to love them very much, but he’s incredibly distracted as they watch the morning news report that announces that Ghost is now Walsh’s running mate. He utters a few choice curses, then crashes a meeting among Ramona, Lorette Walsh and Democratic National Committee bigwig Steven Ott. Tate repeatedly compares himself to Obama, who also faced DNC resistance when setting on his presidential path, but the trio tell him to bow out gracefully. “F—k all y’all,” he replies succinctly, then leaves before security can throw him out.

Tate winds up at his church, where his pastor reminds him to be a man of his word and help the people he promised to help. “Then tell the good Lord to get off his a–and send me a miracle,” Tate grouses.

TATE’S NEW FRIENDS | Ask, and ye shall receive! Blanca and Saxe find the pitiful politician at his soon-to-close campaign headquarters and offer him this ray of hope about James St. Patrick: “How’d you like us to help put him behind bars?” Tate would like, he would like very much… except now he’s got to call off the hit he placed that night at the bar.

Tate meets the father-and-son killing duo — played by The Neighborhood‘s Cedric the Entertainer and God Friended Me‘s Brandon Micheal Hall — under an overpass. They are less than pleased that they traveled all the way to NYC for nothing, especially when Tate says he won’t pay them for a job they didn’t do. When the dad pulls out a gun and says that they’re either going to kill his mark or him… well, what do you think the always-weaselly Tate chooses?

I will give him half credit for this: When he realizes how much he has messed things up, Tate goes to Truth to warn Ghost that he’s in danger. But it’s the afternoon before Ghost’s big announcement party, and St. Patrick is so high on himself that he can’t help but twist the knife repeatedly. “Losing is a skill. I’m glad you’ve become such an expert at it, Rashad,” he snarks. And Tate gets mad enough that he winds up saying nothing about the murder-in-the-works. 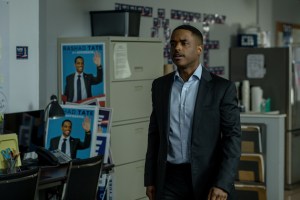 MORE COMPLICATIONS | The hitmen follow Ghost, planning to make their move when he goes to an industrial park. But they’re not aware he’s meeting Tommy there. So the killers start firing, Ghost and Tommy shoot back, and pretty soon it’s the all-out battle we’ve seen in previous episodes. Hitman Dad takes a bullet and dies; Hitman Son runs.

Meanwhile, at the crumbling Tate HQ, Dre swings by with a question: “What do you know about Tariq?” That sends Tate straight to Tasha. “James is planning to throw Tariq under the bus,” he announces, adding that she has to stop him before he ruins their kid’s future forever. But a suspicious Tasha thinks Tate and Ghost are working together, and she refuses to intervene.

Later, while Tate is taking out the garbage at his brother’s house, Hitman Son — his name is Carter, and his dad was Croop — approaches him with a gun. He’s incredibly upset about his father’s death, but when all Tate can seem to focus on is the possibility that Croop had Tate’s number in his cell phone, it pushes the kid over the edge. He threatens to take Tate inside and make him watch while the rest of his family dies… but then Kamal shoots the guy in the back, killing him.

Tate’s story — that Carter was a random, crackhead mugger — doesn’t sit well with his skeptical cop brother. But Tate evades any more questions by going to his office, where the furniture company is repossessing the furniture. To add insult to injury, Walsh and Simon Stern show up and ask for his official endorsement (I’ll let you guess the answer he gave them), and Det. Rodriguez swings by to tell him that the case against St. Patrick is dead.

THE SHOOTING AT TRUTH AND CONSEQUENCES | Meanwhile, Kamal says he’s gotta take his brother to the precinct to log an official statement about the “mugger.” None of the higher-ups seem to think anything’s amiss, though. And the Tate brothers are still at the station when another officer bursts in to say that shots have been fired at Truth, and it’s all hands on deck.

Kamal is really sure that Rashad had something to do with St. Patrick’s shooting. Rashad obliquely says Dre might’ve killed Ghost, and “He might try to implicate me in the crime… He might say that I paid him to do it.” Still, the politician maintains, “My hands are clean.” Kamal tells him to stay in the car when they arrive at the crime scene, but of course Tate doesn’t. He gets accosted by a news crew broadcasting live, and that’s when he learns that James St. Patrick died earlier that evening. He comments that “James St. Patrick’s story is America’s story” and spouts a lot of nonsense that sounds impressive and leader-y, calling for a moment of silent prayer for the fallen self-made man.

The performance catches the DNC’s eye. The next morning, Walsh and Ott are in Kamal’s living room, asking Tate to be Lorette’s new running mate. He says NOPE. “It’s governor or nothing,” he states… and over Walsh’s objections, Ott agrees. Next thing we know, Tate is giving a rousing speech in a church, ending the enthusiastic oration by accepting the Democratic nomination for governor of the Empire State. On his way out of the church, Kamal has some news for his brother: Dre was killed in prison. “Things have a way of working out in your favor,” Kamal observes. Understatement of the season!

DON’T LEAVE US HANGING! | Tate rounds out the hour by telling the press that Ramona was having an affair with St. Patrick (even though it turns out that they weren’t sleeping together… yet) and having vigorous sex with his old staffer, Cassandra, before kicking her to the curb.

Then he sits down to watch the news, because St. Patrick’s killer has just been arrested. We watch Tate see who it is — he seems stunned — but then the hour goes to black. Looks like we won’t find out until the series finale!

It’s down to Tasha and Tariq! Given what we now know, who do you think killed Ghost? And are you ready for the series finale?! Hit the comments!