Eleanor and company are finally headed to The Good Place in this week’s penultimate episode. Is heaven all it’s cracked up to be, though?

The gang is still riding together in that golden hot air balloon as Thursday’s episode opens, giddy that they’ve finally made it into the Good Place. (An adorable flying puppy lets them know they’re on the right track.) When they land, Janet downloads all the info they need and lets the humans know they’ll soon be attending welcome galas tailored to their precise personalities. For Jason, that naturally means racing monkeys in go-karts… but Michael is still feeling a little unsettled. As a former Bad Place demon, he doesn’t think he belongs in the Good Place, and is bracing himself to be vaporized at any moment. 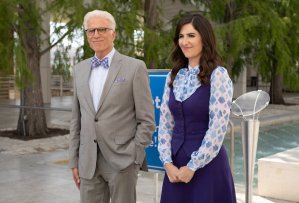 Michael is welcomed with open arms by the Good Place committee, though, who informs him that they’ll be swearing him in as a Good Place architect. And while Chidi’s idols like Socrates and Plato are still stuck in the Bad Place — they both defended slavery, you see — he completely fan-girls out when he learns that legendary philosopher Hypatia of Alexandria will be there. Ready for their welcome galas, the four humans lock arms and walk through a portal, and because they walked through together, the party is a mash-up of all of their fantasies, with people in Jacksonville Jaguars jerseys, mailmen in short shorts reading philosophy… and Stone Cold Steve Austin’s bedpan. (Yep, Eleanor is a certified weirdo.)

Chidi tracks down Hypatia of Alexandria — oh hi, Lisa Kudrow! — and gushes over her, hitting her with a barrage of questions while she offers him and Eleanor a milkshake made of stardust. But when she gets a moment, she ominously tells them: “You’ve gotta help us. We are so screwed.” And meanwhile, Michael gets sworn in as a Good Place architect… but actually, now he’s in charge of the whole Good Place, with the committee quitting and fleeing the scene, leaving him to run the place all by himself. Hey, what the fork is going on here?

Hypatia breaks the bad news to them: “On paper, this is paradise,” but when you get everything you want for an infinite number of years, “you become this glassy-eyed mush person.” Eleanor realizes that everyone there is “a happiness zombie,” and even Jason admits that “go-karting with monkeys got boring real fast.” That’s why the Good Place committee all quit and put Michael in charge. Even they couldn’t fix it. The gang despairs until Eleanor reminds Michael of what she told him he was going through his hedonistic, red Corvette phase: “Every human is a little bit sad all the time, because you know you’re gonna die. But that knowledge is what gives life meaning.” 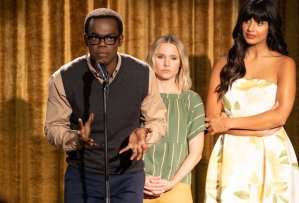 So the humans announce to the Good Place residents that, since Michael’s in charge now, they’re changing things up: They’re adding a door you can walk through at any time, and “your time in the universe will end.” Basically, you stay in the Good Place as long as you want, experience everything you can, and then walk though one last door and be at peace. The residents love it, and they throw a huge celebratory dance party. (With Jason DJ-ing, of course.) They all settle into their Good Place existences, with Eleanor and Chidi cuddled up on a couch and watching an incredible sunset together. Heaven is “having enough time with the people you love,” Chidi decides. But… there’s still next week’s series finale, guys! What’s left?!?

* Tahani, while approaching the Good Place: “It’s the me of places!… I got in. I can say stuff like that again.”

* Jason: “Monkeys are the ideal go-kart opponents. They’re funny enough to give the finger, but not smart enough to win.” 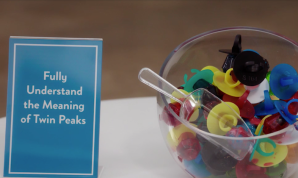 * The Good Place’s welcome treats, including: candy that gives you the “energy you had when you were 12,” ring pops that help you fully understand Twin Peaks, and headphones that play “every nice thing anyone has ever said behind your back.”

* Eleanor telling Tahani: “This room is filled with some of the most interesting people that ever lived. Chat them up. Learn about their lives. Then meet back here so that we can make fun of them.”

* Eleanor asking Hypatia: “How do you get the ‘of’ in your name? Is it just where you hung out the most? Like, am I Eleanor of the Cheesecake Factory Bar?”

* Chidi confessing to Hypatia that “I had a poster of you on my wall in high school. Actually, it was just a poster of Trinity from The Matrix, but that’s how I imagined you’d look because you’re so cool!” (Eleanor: “Oh, is she the reason you got beat up so much?” Chidi: “She’s one of them!”)

* A Good Place resident who hails from ancient Phoenicia and died from a cut on his hand: “I would’ve killed for a vaccine. Any vaccine. It’s crazy that you guys just don’t like them now.”

* Eleanor vowing that she won’t “turn into some slack-jawed, sweatpant-wearing orgasm machine. Oh my God, I’m describing my dream existence like it’s bad. What is wrong with this place?”

* Michael getting goofy after smoking the weed Jason stashed for him (“Whatever happens, it’s cool, my babies”) before digging into a Taco Bell burrito.