Now that the Good Place gang has a new afterlife plan in place, it’s time to start implementing it this week — but not everybody is eager to jump onboard.

Back at Bad Place headquarters, the architects are grumbling because there are no new humans coming in for them to torture. (One of them cries out, “What the here is going on?”) Michael and Shawn call them into a meeting and explain that they’ve made a deal, and that Michael is “kind of your boss now.” Michael tries to tell them they’ll be helping to create a new afterlife system, but they still kind of like the old system, with all the penis-flattening and whatnot. Not even a goofy introductory video with Janet singing “Simply the Test” and Michael on keyboards is enough to convince them. But Michael does get an unlikely volunteer: that pesky troublemaker Vicky.

He doesn’t trust her at first, for obvious reasons, but after the other Bad Place architects bomb their first test scenario for Tahani (they keep trying to add bears with chainsaw arms), Vicky steps in and comes up with a genuinely taxing dilemma: Tahani is at a swanky party thrown for her sister Kamilah, and she’s put on the spot to say nice things about her, even though everyone else at the party is gossiping about Kamilah’s imminent failures. Good work, Vicky! Well, Michael doesn’t think so: In fact, he tells her it stinks and boots her off the project. He later admits to Tahani and Janet that he’s just jealous Vicky figured out the new system so much more quickly than he did — and he knows he needs to get her back.

So he tracks down Vicky and apologizes, and they cook up a plan for her to overthrow his authority in a fake “coup” to get the Bad Place architects onboard. She takes over full creative control of the afterlife scenarios, and — “1.28 Jeremy Bearimy Later,” according to a title card — she’s running a training school for all the new Good and Bad Place architects. The neighborhoods are up and running and thriving, and we hear a ding that indicates someone just made it into the Good Place. It’s all four humans! They climb into a golden hot air balloon with Michael and Janet and soar off to the Good Place. What?! This can’t be the end of the story, can it? We still have two episodes left! 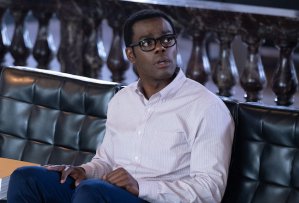 FILE THIS UNDER ‘A’ FOR AWKWARD | Meanwhile, Eleanor and Chidi’s romance hits a speed bump while they dig through the files of every human who ever lived. Eleanor wants to find out which former U.S. Presidents are secretly gay — or “OK, fine, bi” — but she’s terrified when she realizes Chidi could read her own file. She did a lot of bad stuff on Earth (“You don’t know what I did on Halloween 2013”) and is afraid it’ll change the way he feels about her. But actually, when he does read it, he ends up feeling like he’s not good enough for her: He admires how independent she’s always been, he tells her, and worries that he’s just “a damn drip” who she’ll get bored of soon enough.

It takes Jason, of all people, to talk some sense into Chidi: When he worries that Janet will get bored of him, Chidi reassures him that they love each other and that’s all that matters, and Jason turns that back around on him and Eleanor. (“Chessmate!”) Chidi apologizes to Eleanor for freaking out, and promises to learn to play guitar so she won’t get bored of him. Eleanor stops him, though: “I actually prefer drummers. Read my file.”

* Tahani: “With all due respect, ‘it’s the way it’s always been done’ is an excuse that’s been used for hundred of years to justify racism, misogyny…” Bad Place architect: “Exactly! See, this chick gets it!”

* Jason’s (extensive!) list of the greatest people ever: “Evel Knievel, Kool-Aid Man, Mini Me, DJ Jazzy Jeff, a genie, so we can wish for infinity people… Fat Bastard, the World’s Most Interesting Man, Pikachu, Karate Kid, Wendy from Wendy’s, Grumpy Cat and the GPS lady who tells you where to drive.”

* Tahani worrying that trying to retrain the Bad Place architects will be “like when I tried to teach Taylor Swift how to dance. The longest four years of my life.”

* Jason fondly remembering how good he was at siphoning gas back on Earth: “Even if the car was moving, or on fire, or a boat, I still always got that gas!”

* Eleanor, after Chidi decides to read her file right after Oskar Schindler’s: “That’s who I’ve gotta follow? The list guy?” 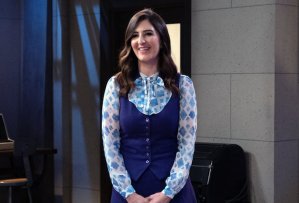 * Janet cringing after Vicky says, “Sure, change can be scary… but I’m an artist, which means it’s my job to be scared.”

* Eleanor defending her earthly actions to Chidi: “I didn’t realize he was my boyfriend’s twin until halfway into hooking up with him, and at that point, you know, it’s a sunk cost!”

* Eleanor telling Chidi she only wants to be with him, but “if Frida Kahlo wants to make out with me in heaven, then you and I are going to have a conversation.”

* The partygoers whispering that Tahani’s sister is such a failure, “she may have to fly home coach, and check a bag. Whatever that means.”

* Janet relating to Michael’s jealousy of Vicky: “I know that feeling. Once on Earth, I didn’t know something, and I had to ask Alexa. I felt dirty.”

* Vicky telling Michael she’s on her way to an “ice cold yoga class”: “It’s amazing. You pull so many muscles.”

* Eleanor, after hearing that someone just made it into the Good Place: “Who was it? Prince? It’s gotta be Prince. Honestly, if it wasn’t Prince, this whole thing is screwed up, and we need to start over.”