The Good Place gang is down to their last gasp this week as Judge Gen is determined to erase all of human history and start fresh — but could a surprise guest change her mind?

The Judge is still searching through all of the Janets’ voids for that humanity-erasing clicker; Janet pleads with her to not go through it, but she just wants to hurry up and get back to binge-watching Justified and her TV crush Timothy Olyphant. (“There’s like 50 gallons of man in a 10-gallon hat!”) With only a few Janets left un-marbleized, Eleanor checks in with Chidi, who’s armed with a newfound confidence: He even tells her “I love you” without stammering or anything!

In his quest to create a new afterlife system, he zeroes in on an essay by Judith Shklar titled “Putting Cruelty First” that points to cruelty as society’s biggest flaw. (He’s also wearing roller skates he got from Disco Janet, we should note.) The current afterlife system that punishes small infractions with endless torment, he argues, is too cruel, and Eleanor realizes they need a new system that applies punishment fairly and justly — and Chidi passionately kisses her for this insight. (Hey, no time for love, Professor Anagonye!) 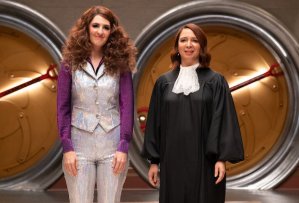 But Judge Gen is still swiftly marbleizing Janets left and right — RIP, Disco Janet — and tells the gang they should probably just go wait at Mindy’s in the Medium Place until she’s done. That gives Michael an idea: Why can’t the Medium Place be a third option for people in the afterlife, between the two extremes of the Good Place and the Bad Place, to give people “their own personal Cincinnati”? They get the Good Place council onboard — of course, those people will enthusiastically agree to anything — but they need to convince Shawn as well. He understands that he’d still have plenty of souls to torture in the Bad Place under this plan, but it would also let Michael and his friends win, and “I don’t care if everyone loses as long as you lose.”

The four humans and Michael scramble to give Shawn what he wants: They even volunteer to be tortured for all of eternity if he’ll agree to expand the Medium Place, but he refuses to budge even an inch. A stirring pep talk from Michael inspires Chidi to come up with a last-ditch plan, just as Judge Gen is closing in on her final void to search: the one that belongs to our beloved original-flavor Janet. The gang all converges there, and Janet convinces the Judge to hear them out by summoning — in an early frontrunner for the best TV cameo of 2020 — Timothy Olyphant himself, in all his Raylan Givens glory! (The Stetson still fits, we see.) 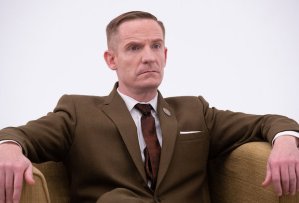 The Judge, Shawn and Olyphant listen as Chidi lays out his proposal: The current system is permanent, with no chance for redemption, so they want to set up a system to train people to be better. (Timothy Olyphant is intrigued!) Life on Earth remains the same, with people accumulating a certain point total, and that total determines how hard or easy their test will be in the afterlife. Architects from the Good Place and the Bad Place will collaborate on building scenarios to challenge each person’s flaws, rebooting them until they get it right. (After each reboot, the person retains a small remnant of what they learned last time.) The hope is that eventually, anyone can make it to the Good Place if they try hard enough.

Shawn’s not happy, though: What about all the lava monsters who were trained to torture people? (“I ask you: Into whose throats are they supposed to pour lava?”) Eleanor explains that the Bad Place architects and demons will help create and act out the Medium Place scenarios, but Shawn still says no, and Judge Gen resumes her search for the clicker. (After Olyphant gallantly kisses her hand goodbye, of course.) It looks like the end of the road, and Michael admits defeat to Shawn, but Shawn is annoyed he’s giving up: “Fighting you is the most fun I’ve ever had.” Michael knows that Shawn thinks the system stinks, so he pushes him to come up with something better. Together.

Just as Judge Gen’s thumb is on the clicker, Michael stops her and tells her he and Shawn have an agreement “in principle” for a new afterlife system. What’ll it look like, though? Just three episodes left to find out, folks.

* Neutral Janet’s last words: “These are my last words. End of words.”

* Janet, when Michael asks her to show Judge Gen the light: “I already showed her the light. She wasn’t impressed. To be fair, she was there when it was invented.” 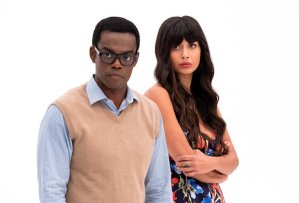 * Tahani’s Name Drop of the Week: “I was once in Portofino with Bruno Mars, LeBron James and Dr. Ruth Westheimer… long story short: LeBron performed a successful tracheotomy, the song won multiple Grammys and everyone was really happy.” (Eleanor: “Well, now I want to hear the story.”)

* Jason, on unjust punishments: “I once went to jail for a week just because I stole a hot dog. Well, a hot dog-shaped car. I stole the Wienermobile.”

* Jason suggesting that Chidi should sleep with Judge Gen to get them out of trouble: “I’ve done that a bunch of times! It’s called a Jacksonville plea bargain!”

* Jason randomly telling Shawn: “You used to be cool, but you’ve changed, man.” (Um, when was that, exactly?)

* Shawn, torn by the humans’ offer to sacrifice themselves: “On one hand, I would love to get some spiders in those buttholes. On the other hand, there would be billions of buttholes going completely unspidered.”

* Basically anything and everything that Timothy Olyphant says and does, including him casually telling Eleanor when she refers to him as “Timothy Olyphant” that “Tim’s fine.”

* Shawn lamenting that “you corkscrew your first eyeball, and you’re like, ‘Man, I can’t believe they’re paying me to do this.’ By the trillionth, it’s like… I should’ve just been a teacher.”