Warning: This post contains spoilers from Thursday’s The Good Place.

Chidi finally has the answer… and we still have a lot of questions.

Thursday’s fall finale of The Good Place focused on our favorite overly anxious ethics professor, with Chidi flashing back through his life on Earth and all of his rebooted afterlives as Michael put his brain through a “hard reset.” We learned a few key tidbits about Chidi’s backstory — at eight years old, he made an adorably sensible presentation to his fighting parents entitled “Why You Should Not Get Divorced,” which set him on the path to becoming a professor — and we watched Chidi gradually adjust his ethical framework, thanks to vital advice from each member of the Soul Squad.

Through it all, Chidi was always determined to find “the answer” to every problem that life presented to him, but as he later told Michael: “Turns out life isn’t a puzzle that can just be solved one time and it’s done. You wake up every day, and you solve it again.” When he finally emerged from his brain reset, he was noticeably more at ease than usual; he didn’t even panic when Eleanor told him he needed to come up with a new system of ethics for humanity, pronto. Instead, he consulted a message he wrote to himself and gave to Janet to return to him when he awoke: “There is no ‘answer,’ but Eleanor is the answer.”

Diving so deeply into Chidi’s past lives was definitely a challenge for Harper. “If I tried too much to think about just the overwhelming arc of the whole thing, I think I probably would’ve just lost my mind,” the actor, who’s currently in Atlanta filming Amazon’s The Underground Railroad, tells TVLine with a laugh. “I’m like, ‘Oh, I’m pretty much on every page of this thing. OK! Cool!'” But it’s all tied together by Chidi’s quest to make sense of his own flaws, which “seems like it’s been sort of a recurring theme over the various lives that he’s lived,” Harper notes. “There’s a moment where he’s like, ‘There’s something with my brain that isn’t right, and I’ve got to see how other people move through the world and do anything.'” 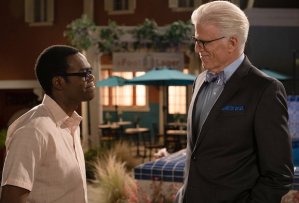 That quest led Chidi to quiz his Soul Squad pals about their personal philosophies on life — a series of quiet character moments that stood out from The Good Place‘s usual breakneck pacing. “The last couple of seasons, it’s been pedal to the metal. The story is moving very, very fast. The stakes are always crazy high,” Harper says. But this week, we got to slow down and see “those moments where everything is fine, except for Chidi’s internal life. He needs to reach out to his friends to help him figure out how to be better, how to feel better. And they all take the time to do it.”

Even a self-described Jacksonville dirtbag like Jason had some sage wisdom to offer Chidi — “When something dope comes along, you’ve gotta lock it down,” he advised Chidi on the day of his wedding to Janet — and Harper thinks that Chidi actually has a lot to learn from someone like Jason: “Impulse control is not his strong suit, [but] overthinking is not something that he ever engages in.” In fact, he says that “between Jason and Chidi is the perfect dude. Somewhere between those two guys is the most balanced, kind dude.” 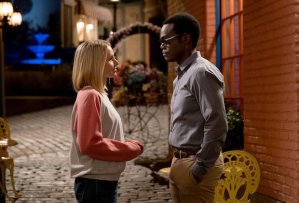 Chidi’s ultimate answer — that there is no answer, but Eleanor is the answer — boils down to “some basic ideas in contractualism,” Harper believes. “What do we owe to each other? In the end, not to get mushy about it, but other people are the point.” He sees the Chidi/Eleanor relationship as the core factor in each iteration of Chidi’s existence: “Basically, this entire afterlife has been a stress test of these relationships, and that’s the thing that always pulls through, in all versions. Eleanor and Chidi need to be together. Even if it’s platonic. Even if it’s as enemies! They just need to bounce off each other in some way.”

So will we see a more easygoing Chidi when the final four episodes debut in January? Well, yes and no, Harper hints: “Look, there’s no way that you get 300 years of lifetimes downloaded into your brain and not change, you know? So there will be some differences. But in the end, the core of who he is is still there. Old habits die hard.” Plus, the extremely high stakes of the final episodes will play a role, too: “At the heart, Chidi is still the same guy, but the circumstances are wildly different from anything they’ve been before in the series.”

The Good Place has already wrapped filming, and Harper admits that the experience of being on set shooting the series finale “was sad, man… Those last couple of weeks, we were really just sort of taking each other in. There were some tears, there was some snot. But we all feel good about the work that we’re doing. So it’s hard to be too down about it. It’s something that’s ending on our terms, rather than something that’s being snatched away from us before we’re ready. So there’s a beauty to that as well that I really felt on set.”

We know by now The Good Place has a strict no-spoilers policy, but Harper does hint that the one-hour series finale (airing Jan. 30 on NBC), in one word, comes down to “‘moments.’ Moments can be momentary, but also in the grand scheme of things, the universe is a very big, old place, and our lives on this planet are a moment in respect to how long the universe has been here. So I think when it comes to how big the story is and how big the world and the universe of this show is, it really boils down to moments.”

Alright, Good Place fans, this is your moment: Grade tonight’s fall finale in our poll, and drop your thoughts in a comment below.