As we learn in this week’s A Million Little Things, you have been lying to Maggie and her mom since the moment you met them. You never got her brother’s heart. In fact, it looks like you’ve never had any surgery of that sort, given how you have absolutely no scar whatsoever marring your torso (which we saw briefly when you took off your shirt at the end of the episode).

Oh, waaaaaaait a minute. On second thought, that may make you an even better candidate for joining the Friends of Jon. Because if there’s one thing that these Bostonites love, it’s keeping secrets that ultimately see the light of day and then tear the friend group apart. I see what you’re doing, bud. That’s an aggressive, yet cunning, move! Carry on.

Read on for the highlights of “The Kiss.”

GUESS MINE IS NOT THE FIRST HEART BROKEN | It’s three months after everything that happened in the previous episode, so how about a little check-in? Charlie is spending some nights at Eddie and Katherine’s house, which is super fun, because she’s teething. Sophie is still really mad at both her mother and Eddie; she’s also working at the restaurant to pay off the damage she did to his guitars. Gary is bumping uglies with so many random women that he feels the need to get tested for sexually transmitted diseases. (“So, my penis isn’t going to fall off?” he asks when those tests come back clear. Nice.) Rome and Regina are in the throes of the adoption process. And Maggie, whose hair has grown back into a cute pixie cut, traveled for a while and now is about to enter the world of online dating.

Let’s start there. She and Eric sit at a coffee bar and build her online profile, bonding over how having gone through surgeries like theirs make it “not easy to be physically vulnerable with someone new,” as Maggie puts it. Their banter is so flirty that the barista suggests they should date. “No, he has my brother’s heart,” Maggie clumsily explains, leading the woman to think that Eric is seeing Maggie’s sibling. The rest of the conversation is so awkward all around, with Mags and Eric tripping over themselves to deny a relationship, which of course means they’re heading toward something, right?

Later, Maggie is at home and writing about life after loss when she takes a break to cruise her dating app. When she sees Gary’s profile on there, she throws the phone. Meanwhile, when he’s not hooking up with whomever, Gary is helping paint sets at Danny’s school in preparation for the big production of Grease. But, to be clear, he’s also having some extracurricular fun with one of Danny’s teachers.

When Danny catches Gary in an intimate embrace in a classroom, he’s mad. “Why are you kissing my social studies teacher?” he asks. “Because your Spanish teacher’s married,” Gary jokes, but Danny isn’t having it. He’s extra stressed, because he’s supposed to kiss the girl playing Sandy during the show, and he’s never even had his own first kiss. “It is a big deal,” he says, “and I wish it was with someone I cared about.” 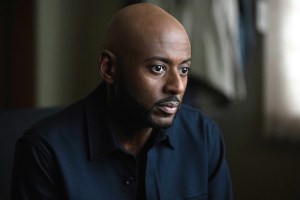 TRUTH HURTS | Rome and Regina meet with a social worker (hi, Claws‘ Niecy Nash!) who tells them that everything looks good with their adoption application so far. And when Rome starts to worry about the medical records they have to submit, Regina reassures him that she omitted the part about his mental health struggles the previous year. But then that makes Rome think she’s ashamed of what he’s been through.

Eventually, after talking with his therapist, Rome gently confronts his wife. “I want this baby more than anything, but I can’t have my first act as a dad be a lie,” he says. She understands, and later explains that although she worries sometimes that his depression will come back, she revised their medical history on the forms to reflect the truth. Anyone else worried that the revision — though the right thing to do — will bite them in the tush?

At intermission, he manages to choke out a compliment — “Your hair looks good” — but that’s where the pleasantries end. They’re both under the impression that the other initiated the breakup. She notes that he looks tired and stressed, a concern he dismisses quickly. “You don’t get to have an opinion about how I live my life anymore, Maggie,” he spits. She quietly responds that she’d been hoping he’d change his mind about leaving her, but she doesn’t feel that way anymore.

While all of this is going on, Danny uses his downtime during “Hopelessly Devoted to You” to address Elliot directly backstage. “You really hurt my feelings,” Danny tells his crush, lamenting once more that he’s about to have his first kiss in front of an auditorium full of people. So Elliot makes the problem go away by kissing him right there, instead. It’s sweet. 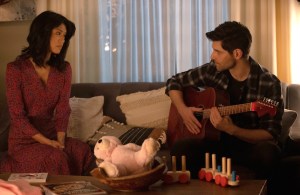 ROAD RAGE | After the show, Sophie tears into her mom and Eddie in the school’s hallway. But Delilah is sick of her daughter’s declarations that she killed Jon. D says that her husband took his own life, “and you can hate me all you want, but I will not let you blame me for that.” Still, Soph says she doesn’t want to live with her mother anymore, and she winds up spending the night at Rome and Regina’s place.

Rattled by seeing Maggie both at the show and on the dating app as he walks home, Gary flips out when a car rolls through a stop sigh. He continues picking a fight even as the driver stops and gets out of the vehicle, but Gary shuts up when he realizes the other man has a gun. The guy points it at him but ultimately does nothing. As he drives off, Gary needs a moment to pull himself together.

Eddie and Katherine end the evening by telling Theo about Eddie’s sister Lindsay, whom Eddie contacted after Charlie was born. “Theo has a sister now, and it reminded me of mine,” he explains earlier in the hour. But Katherine wants nothing to do with her in-law, because she’s an alcoholic like Eddie, and the two of them form a dangerous co-dependency. He sadly agrees. So when they open up to Theo about the aunt he never sees, they admit it’s because she has a drinking problem. “The truth is, I have the same problem,” Eddie says. Theo immediately tells his father he’s proud of him, which brings him to tears. 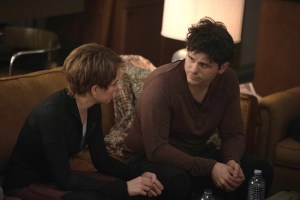 SMOOTH CRIMINAL | Remember my outrage at Eric earlier? Here’s why. He and Maggie go for a run, but she’s still annoyed about Gary when they get back. So annoyed, in fact, she hasn’t noticed how weird Eric gets every time she mentions his scar. They talk about dating again, which causes him to tell her that he hasn’t been with anyone since Chloe died. And then they edge closer until they’re kissing.

It’s starting to turn into something when Eric pulls away and Maggie, embarrassed, flounders her way out of the apartment. (Side note: Allison Miller’s frantic “Try to forget how red my face is! Talk soon!” makes me laugh.) Once she’s gone, though, Eric takes off his sweaty shirt… and he DOES NOT HAVE A SCAR. At least he has the good sense to look sad about this turn of events?

Now it’s your turn. What did you think of the episode? Did you guess Eric’s secret? Sound off in the comments!