If you told me that Thursday’s Legacies was secretly a backdoor pilot for a new spinoff about an ice cream-scooping, cat-resurrecting necromancer known simply as “Ted,” I would be elated.

That’s pretty much how things shook out for The Necromancer after his brief visit to Mystic Falls in Season 1. As we learned via flashbacks, the “freedom” he gained by destroying the knife and escaping Malivore’s clutches was a miserable new existence in Texas, complete with a strip mall gig, a new name (Ted!) and absolutely no powers whatsoever. Fortunately, Ted found a kindred spirit in his dopey co-worker Chad, who essentially agreed to be the Jesse Pinkman to his Walter White — subbing out cooking crystal meth for bringing small animals back from the dead, of course.

When his necromancy skills still weren’t up to snuff after months of practice, Ted was ready to throw in the towel… until Chad lifted his spirits with a suggestion that would change everything: “We pee on it! Yeah, we take a leak right in that pit.” Ted agreed to Chad’s proposal without hesitation, trekking to Georgia to give Malivore a golden shower, only to discover that someone (Hope!) already defeated the sentient pit of evil. “If Malivore can be beaten, anything is possible!” Ted concluded, although returning to his former glory required him to sacrifice that which he valued most. (R.I.P., Chad!)

Just kidding! With his powers fully restored, the reinstated Necromancer brought his idiot sidekick back to life, welcoming Chad back into the fold with his very own red robe of villainy. Despite expressing his concerns about the whole “killing children” part of The Necromancer’s plan, Chad remained by his side as a new portal to Malivore was opened for their purposes. We even got to meet the first guest, a gnarly looking creature who’s now en route to the Salvatore School — and no black-magic hourglass is safe! 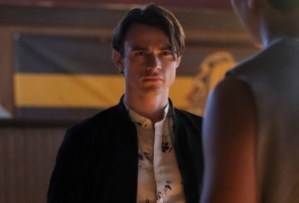 * Alaric put Landon in charge of evaluating whether Sebastian poses a threat to the other students, and despite a few close calls caused by that troublemaking witch Alyssa, he passed the test with flying colors. Unfortunately, it’s possible that Sebastian’s good nature doesn’t extend beyond the walls of the Salvatore School, as Alaric caught him nomming on an unsuspecting townswoman during an evening patrol. Here’s the thing, though — Alaric told Lizzie that Sebastian then decided to leave the school of his own accord, but I’m not sure I believe him. In their final scene together, it looked like the arrow Alaric shot into Sebastian’s back was just the beginning. (Long story short, I am concerned!)

* Sensing some lingering awkwardness with Josie, Hope volunteered to help her learn more about the mora miserium. Not only did it successfully bring Landon’s ladies closer together, but it also triggered another fun Originals shout-out. (As Hope’s “friend Vincent” once told her, a mora miserium is doomed to break, but a protection spell could prolong its destruction.) Josie also took some time to reconnect with Landon, ultimately deciding to move forward as close friends, a commitment they honored by decorating Hope’s new dorm room together. #friendship

* MG also had a pretty rough day — not only did Lizzie openly use him as a distraction from Sebastian, but he also nearly flipped his ripper switch during Alyssa’s lunchtime prank. Fortunately, MG’s mood did a full 180 when Dorian introduced his new intern, Kaleb’s sister Kym! (Also, I love that MG was reading a Crisis comic when Lizzie interrupted him. First he has a nightmare about Grodd, and now this? I feel like MG has a decent shot at making it into the Arrowverse’s next crossover.)

Your thoughts on Legacies‘ first episode of 2020? Drop a comment with your thoughts below.