Question: I need to know who that was in Randall’s kitchen in this week’s This Is Us!—Patricia
Ausiello: Crazy, right? Though I’ve been bound to secrecy, I can let this little tidbit slip: That scary moment from the midseason premiere pales in comparison to the shocking way a character we know and love reacts to something that happens in the next episode. 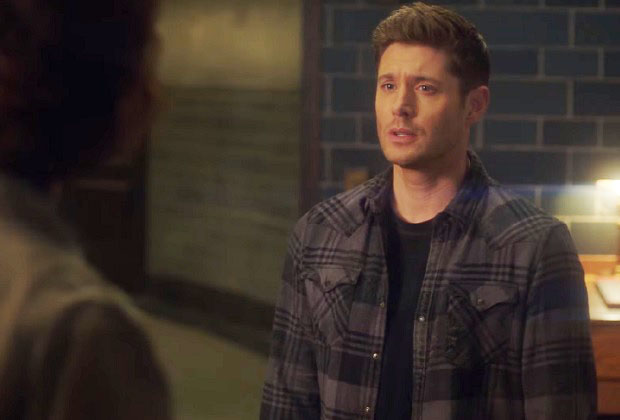 Question: Dean’s time in Hell has been referenced in a couple of Supernatural episodes, and Dean also seems to be holding on by a thread. Is all this building to something? Any chance we might see Alastair again? —Adder
Ausiello: “I don’t know that we’ll be seeing Alastair again. He was kind of locked away in The Empty,” showrunner Andrew Dabb tells us, before addressing the first part of your question. “Dean’s story and Sam’s story is the story of trauma, and so, going to Hell was an incredibly traumatic thing for Dean. I don’t think it was the most traumatic thing he’s gone through, and that’s saying a lot, when going to Hell is not the most traumatic thing you’ve gone through. But certainly, as the traumas pile up this season, it’s a way to kind of revisit some of those stories and some of those moments.”

Question: Any more information about the new Chicago Med doctor played by Jessy Schram, specifically who she will be interacting with most? —Laurel
Ausiello: In the wake of the recent “Manstead” tensions, “Will does start a new relationship,” executive producer Andrew Schneider reveals, but would not confirm or deny that the new lady in the doc’s life is Schram’s gynecological surgeon Dr. Hannah Asher. Meanwhile, “Natalie starts [to grow] a little closer to Crockett.” However, EP Diane Frolov notes that “there’s a lot of conflict” between the characters. Adds Schneider: “It’s a love/hate relationship.”

Question: Anything on Grey’s Anatomy‘s midseason premiere? Do I have to watch with Kleenex? —Lynn
Ausiello: If you’re asking me whether anyone dies, you know very well that I can’t say. But I can tell you that the Thursday, Jan. 23, episode of the ABC drama — airing in its new-old timeslot, 9/8c — includes a major turning point for one couple and a big decision that’s sure to haunt the doctor who makes it. Also, since you mentioned tissues, I’d feel bad if I didn’t warn you that there was a moment during Station 19’s Season 3 premiere (airing that same night at 8/7c) that left me misty-eyed. BONUS SCOOP: Kim Raver shared that she and Station 19‘s Jason George shot “a really lovely scene” in next week’s crossover “that reveals a bit more” about Teddy and Ben. Looking ahead, she added, an “unbelievable” upcoming standalone episode will divulge further things about Teddy “where even I was like, ‘Whoa!'” 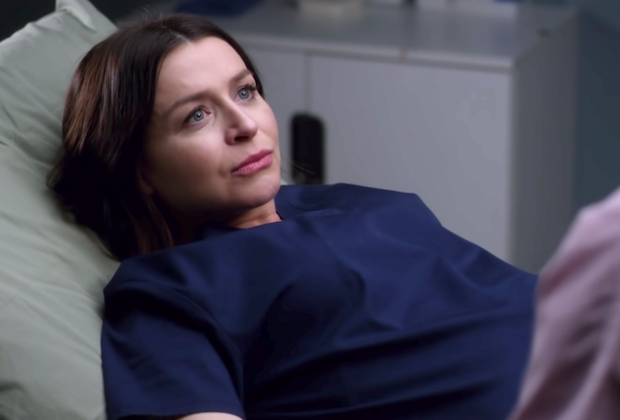 Question: Who is the father of Amelia’s baby on Grey’s Anatomy: Owen or Link? —Cait
Ausiello: Despite Amelia’s stunned reaction to the conception timeline in the fall finale, which seemed to suggest the baby was Owen’s, showrunner Krista Vernoff assures us that neither the mom-to-be nor we know for sure yet. “It’s still a mystery.”

Question: Can we hope for a good storyline for Station 19‘s Travis in Season 3, especially after he got arrested in the end of Season 2? —Pascaline
Ausiello: “Season 3 is going to get really complicated,” Jay Hayden says. “When Krista Vernoff brought me into her office, she was like, ‘I don’t feel like we explored enough of your backstory… why his relationships keep failing, and we need to carve our way into that.’ She basically said we’re going to handle the prison, and then we’re going to get into who Travis really is.” And what might that include? “There are more relationships that come up,” Hayden teases. “Maybe flashback ones, and maybe also new ones.”

Question: On Chicago Med, will Ethan find out about April and Marcel via a third party source or April? —Laurel
Ausiello: “April will finally confess,” EP Andrew Schneider confirms, without going into detail. In the meantime, the newly engaged couple is going to turn to IVF in their quest to have a baby.

Question: Any new intel on how Grey’s Anatomy will explain Alex’s absence? — Jenna
Ausiello: Justin Chambers’ MIA status is addressed in next week’s winter premiere… but not in a way that will bring closure to the matter. (BTW, check out our “dream/nightmare” Alex exit scenarios.) 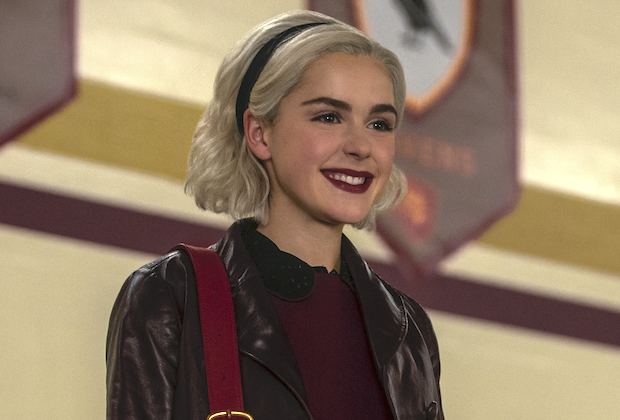 Question: Maybe I’m the only person who still wants it, but any chance of a Riverdale/Sabrina crossover? —Deb
Ausiello: I wouldn’t expect to see the teenage witch rubbing elbows with Betty and Veronica anytime soon, but you’ll be happy to know that the town of Riverdale plays a very specific role in an upcoming episode of Chilling Adventures of Sabrina‘s third part, which arrives in all its eight-episode glory on Friday, Jan. 24.

Question: Not that I’m hoping for another tidal wave to hit, but can we expect more Buck/Christopher storylines on 9-1-1 this season? —Jim
As a matter of fact, Oliver Stark says there’s a “really lovely sequence” at the end of this season’s 12th episode, which is “going to melt people’s hearts.” He acknowledges, “We’ve seen them struggle through so much darkness this season. This is a chance to see them just having fun. I can’t wait for people to see it.” You’ll have to be patient, though, because a premiere date for the second half of Season 3 has yet to be announced.

Question: Where has George been on Evil? —Naomi
Ausiello: You’re in luck: Kristen’s nightmare buddy is back in this week’s episode “in a form that… you couldn’t imagine what you’re going to see,” Katja Herbers teases. “He’s going to be back, but he’s going to be very different. A different shape.” And has the disturbing demon been paying attention to what’s gone on in his absence? “Yup,” Herbers confirms. “He seems to be very aware of what’s going on in the whole world.” 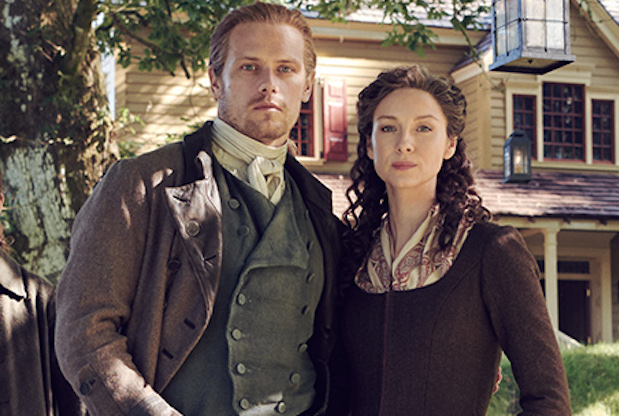 Question: Outlander Season 5 scoop, please! —Myriam
Ausiello: TVLine’s in-house Sassenach Kim Roots has seen the first few episodes of the upcoming season, so I’m going to turn it over to her: “Real talk, Outlanders: The Fiery Cross is not my favorite installment of Diana Gabladon’s book series, but I’ve been pleasantly surprised by how much I’m enjoying watching Claire and Jamie establish themselves as Himself and Herself on Fraser’s Ridge. And there’s a simple-yet-beautiful scene near the start of the season that had me marveling anew at Sam Heughan: How has this guy not gotten more award nominations?!”

Question: Anything to share about Altered Carbon Season 2? —Eric
Ausiello: Two things, actually. First, the Netflix show’s sleeve-swapping universe makes Anthony Mackie’s introduction as Takeshi Kovacs — a role previously held by Joel Kinnaman — really seamless, more so than I would’ve thought possible. And second, there’s a big reveal at the end of the first episode that’ll make you press “Play” on the next hour so quickly, your stack’ll spin.

Question: The new season of Fargo looks great, but I didn’t see Uzo Aduba in the trailer. Is she still in the Season 4 cast? —Becky
Ausiello: No, Aduba “had to drop out, unfortunately,” executive producer Noah Hawley reveals, adding that “she had some personal family issues” that kept her from filming Season 4. But you will see Aduba in another FX production soon: She’ll play trailblazing congresswoman Shirley Chisholm in the limited series Mrs. America, debuting April 15 on Hulu.

Question: Got any scoop on who Hugh Dancy is playing on Homeland? Does he share any scenes with his real-life wife Claire Danes? —Blake
Ausiello: No, Dancy and Danes won’t share any screen time in Homeland‘s final season… but if they did, they would definitely butt heads. Dancy “plays an advisor to the President who has a very strong opinion about policy that definitely is antagonistic to Carrie’s mission,” executive producer Howard Gordon teases. He is “sort of loosely based on John Bolton or Stephen Miller,” EP Alex Gansa adds, and “has positioned himself in a very adversarial way to the peace process” that Carrie and Saul are working on in Afghanistan. “He does not trust the Taliban. He does not believe peace is possible.” 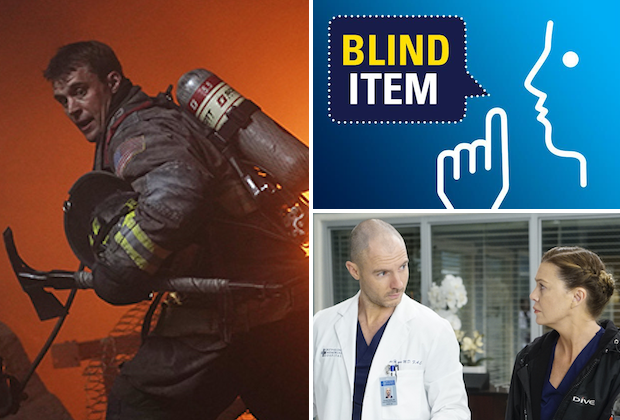 Question: I’m already missing Schitt’s Creek. Give me something to look forward to? — Caryn
Ausiello: In short? The Tuesday, Jan. 21, episode, “The Job Interview.” How come? Because it includes an Alexis/Ted moment that, despite the distance between them, will turn you into a puddle of mush. Plus, there are big, huge, honking hints about the Roses’ and Stevie’s futures.

Wait — there’s more Ask Ausiello to be had! Head to the attached gallery above — or click here for a direct link — for six BONUS AA items, including a Blind Item that will have you seeing double.