Rebecca gets a diagnosis, of sorts, in this week’s This Is Us. And given the pain and suffering that the phrase “mild cognitive impairment” could mean for her and her family in the coming years, is it any wonder that she spends much of the hour wrapped in memories of the man she loved and the babies she raised?

“Light and Shadows” is a tough hour to watch, in part because it captures the helplessness of someone at the precipice of a debilitating disease who knows things are going to get bad, but has no clue regarding when or how. On a more positive note, Mandy Moore is quite good as Rebecca starts down this awful path; I bet we’re going to see her best work yet by the end of this season.

In other news, Kevin pulls a Jack-sized romantic gesture (that goes bust), Randall gets a really unwelcome surprise and LadyKryptonite strikes again. Read on for the highlights of “Light and Shadows.”

TOBY TELLS THE TRUTH | Back at home after Thanksgiving, Kate and Toby finally have it out over the text thread she saw. He maintains that LadyKryptonite — aka his gym buddy, Kara — is no threat, and they’re just friends. Eventually, Kate softens and accepts his apologies. “When you tell me something, I believe you, because that’s how we roll,” she says.

Weeks later, Kate plans a surprise Jimmy Buffet-themed birthday party for Toby, and she invites all of his CrossFit pals. Kara doesn’t come, though. And when Kate mingles with some of them before Toby arrives, the surprise is on her: Toby left that gym weeks ago, around the time of their argument.

They get through the whole party, but when the guests leave, Kate demands answers. “You were right about Kara,” Toby says sheepishly, explaining that the woman he claimed was totally just a platonic bud tried to kiss him after they got back from Philadelphia. He stopped her advances and quickly switched CrossFit boxes, he says, but Kate’s looking deeper. “Did you ever consider that she got the wrong idea because you avoid being home with me?” she wonders, starting to cry as she adds that she can feel him pulling away.

Toby eventually confesses that it’s not her: The tension stems from the fact that he can’t look at Jack without feeling profound sadness about all the experiences their son will miss because he’s blind. Kate is not happy to hear this, especially seeing how her birthday gift to him is a retreat weekend for families with vision-impaired children. She sadly brings Jack into the kitchen and is starting to feed him when she realizes he’s reaching for the pineapple party lights they’ve strung up.

Kate excitedly calls Toby into the room, and they’re both so happy that their son apparently can distinguish light from shadow. The marital tension eases… at least for now.

IS THIS KEV’S BABY MAMA? | Kevin hires a matchmaker, but none of the women he meets are good fit (and one is flat-out racist). So he quits the service, declaring, “Universe, it’s up to you, man.” Just then, a woman catches his eye across the coffee shop he and Kate are visiting. “Kev, the universe does not work that fast,” his sister snarks, but Kevin runs off to have a meet-cute with the brunette (hi, Chicago P.D.‘s Sophia Bush!).

Turns out, her name is Lizzie, she has a dog named after Rocky‘s Adrian Balboa and she’s not starstruck by Kevin, although she knows exactly who he is. All of this dazzles the former Manny, who calls in some favors and whisks her away for a private John Legend concert at the Hollywood Bowl. She’s made it clear that she’s just visiting Los Angeles and is on her way home to Chicago the next day, but Kev doesn’t care.

It’s all going so well… until he kisses her and she stops him. “I can’t do this,” she says, upset. “Who gets to meet their hall pass, let along have them be interested in you?” That’s when Lizzie confesses that she’s married and that Kev is on her list of celebrities that her spouse has OK’d her to sleep with — you know, that old game — but apparently the husband is not as cool with it as he thought he’d be, because he’s been calling and texting her all day. Kevin is taken aback, and he remains stunned as she apologizes and skedaddles right outta the concert venue while John Legend is on a break between sets.

That night, Kevin goes back to do some reshoots for the M. Night Shyamalan movie. On his way to set, he hands his phone to the production assistant responsible from shepherding him to and from his trailer. And the device is in the crew member’s hand when we see that Sophie is calling Kev. 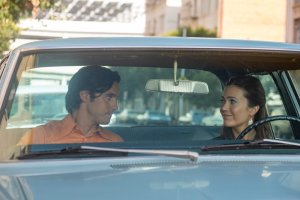 SPARKS FLY | Before we get to the hardest part of the hour, how about a brief respite in young Rebecca’s big rom-com moment? She drives Jack home immediately after his drunken day at the golf course, and you can tell that her father’s words have rattled him. The next night at dinner, while she’s mid-conversation about the family party they’re supposed to attend soon, he breaks up with her right there in the restaurant. He says they’re too different, calling himself a “part-time mechanic. That’s not who you belong with.” He can’t even afford the tip on their meal, a point he drives home as he walks out and leaves a teary Rebecca sitting at the table, dumbfounded.

A heartbroken Rebecca attends her father’s birthday bash solo, and she and her mother have an interesting conversation in the kitchen about how big romantic gestures give way to smaller signs of love over time. Still, she says, Rebecca needs to do what she wants with her own life, and she mentions that Papa Malone “got into Jack’s head” about not being good enough for her.

Rebecca takes off, driving to the garage where Jack is working on a car. “I’m in love with you, Jack,” she declares. “You and I, we’re going to have it all together. We’re going to have the big moments and the small moments, and it’s going to be one for the ages.” Well, after that, how can he resist? “I can’t believe you beat me to saying ‘I love you,'” he says, taking her in his arms. Then he voices his love for her and they kiss, literal sparks flying behind them from some work a welder is doing in the background. 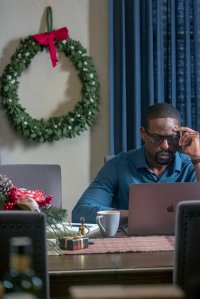 MOMENT OF TRUTH | Randall badgers a top-of-her-field doctor into seeing Rebecca, then flies out to California for the appointment. Miguel bristles at his stepson’s intensity; Randall angrily wonders why Miguel hadn’t noticed Rebecca’s decline over months when Randall was able to notice it in one day. Meanwhile, Rebecca takes a test that asks her to do thinks like draw a clock face and repeat phrases back to the doctor.

The trio waits in the hospital’s cafeteria for the doctor to review Rebecca’s results. She muses about the time when Randall was a baby and tended to wake up before his siblings. Rebecca would put on her headphones and listen to music while she rocked Randall in the nursery. “Babies change so fast at that age,” she says as we watch the moment in flashback. “I made sure to remember every little detail of those mornings.” Then the doctor calls, asking Rebecca, Miguel and Randall to come up to her office.

Doctor Whittaker reports that Rebecca had trouble drawing the clock — a sign of cognitive trouble — and remembering the phrases. The doc wants a blood test and MRI before they start narrowing down exactly what’s going on: It could just be continued minor memory loss “or things could continue to deteriorate,” the physician says. Later, Miguel apologizes to Randall, crying a little as he says “I just really needed to believe it was plain, getting older stuff.” Randall reassures his stepfather that they’ll get through it one step at a time.

Hours later, Randall arrives home in the middle of the night. He checks in on the girls and kisses a sleeping Beth, then goes downstairs to grab a sip of water… and there’s a STRANGE MAN STANDING IN THE KITCHEN, then the episode cuts to the credits.