Netflix’s The Circle is the type of reality show that you plan to watch only one episode of, just to see what the deal is… but then suddenly it’s dark outside and you’ve blown through eight episodes in a row. Which is to say: It’s amazing, and the only thing I want to talk about.

It’s nearly impossible to explain The Circle (which Netflix has been rolling out in four-episode batches each Wednesday) in a way that makes it sound interesting or worth watching. But: Eight contestants live in an apartment building together, but in eight separate rooms so they never see or hear each other. They only communicate via a social media platform known as “The Circle.” Each contestant creates a profile (originally consisting of one photo, relationship status, and a short bio) but they have the choice to either be themselves or to go the catfish route and pretend to be another person entirely. Throughout the season, each person updates their statuses, chats privately or in groups, and rates each other from first to last. These rankings are reminiscent of a mix between MySpace’s Top 8 and the “Nosedive” episode of Black Mirror. Generally, the top two “influencers” get to “block” one of the contestants, effectively kicking them out of the Circle — and their swanky temporary apartment — for good. (Sometimes The Circle switches up the way people are blocked, keeping its episodes fresh, in a way that’s similar to Big Brother.)

In the season finale, set to premiere this Wednesday, Jan. 15, the remaining contestants do one last ranking and the highest-rated played goes home with $100,000. 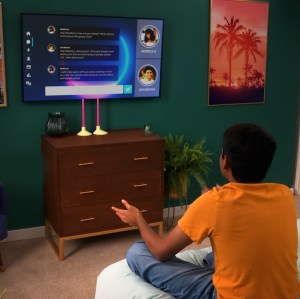 Watching a handful of people sit alone and talk to a computer screen doesn’t exactly sound like good television, but I promise you: It’s surprisingly riveting, and it’s so easy to get sucked in. The contestants don’t even type but instead talk to their screens, dictating spelling peculiarities or describing emoji aloud: “Hey guys. Smiley face emoji,” one contestant greets the chat. “Hi with a bunch of i’s,” another responds. All reality shows tend to be repetitive but The Circle one-ups them: “Chris, I like your vibes bro,” says/types contestant Joey before the show cuts to Chris, in his separate room, reading aloud, “Chris, I like your vibes, bro.” This happens numerous times, contestants reading back what we heard a second beforehand, and it should be annoying but it’s somewhat hypnotizing.

The assumption going into The Circle is that the contestants who choose to be catfish — such as Seaburn, who uses photos of his girlfriend and pretends to be “Rebecca,” or Karyn, a lesbian who pretends to be straight, thinner “Mercedeze” — are the reason to watch. But as the season goes on, it’s the real people, the ones who are playing as themselves (albeit sometimes with a few tweaks: many with partners pretend to be single for the sake of flirting within the game) who emerge as the most interesting and compelling characters. This is mostly because it’s somewhat lovely to watch the genuine joy on someone’s face when they receive a nice, complimentary message — that surge of dopamine that we’re all familiar with. It’s nice to see people like Shubham, a nerdy 23-year-old who thinks social media is the root of all evil, commit 100-percent to being entirely himself. In the first episode, the other contestants glance at his profile and rank him last but as they all begin to get to know him, they find him as endearing as the audience does and he slowly begins to rise up the ranks. 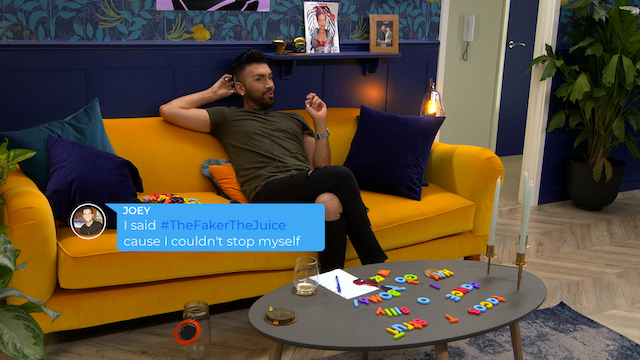 The contestants, like we all do, scroll through photos to find the right profile pic, trying to decide which one shows their best qualities — physical or otherwise. As Seaburn looks through photos of Rebecca, he tries to figure out what sort of person he wants to portray. “That will definitely catch the eyes of the dudes ’cause we need to get the men on board,” he says of one sultry photo before settling on a more casual one of Rebecca sitting outside for a “girl next door” look. “That works because it highlights us in all our glory.” (Seaburn frequently refers to “us” when talking about his persona as Rebecca, which is simultaneously amusing and creepy. It gets even worse once he’s gifted a giant teddy bear that he interacts with nonstop.)  Joey, an Italian mama’s boy from New York who clearly watches Jersey Shore, picks a photo of himself smiling for the camera: “You could tell that guy’s got a nice toothbrush!” (Joey is my favorite.)

There are so many small moments throughout The Circle that work despite how boring they seem when described on the page. Seaburn trying to fake his way through a “girls only” chat about periods, for instance, or the time the boys decided to have a contest to see who can get to 50 push-ups first. Only Shubham actually does them; the rest sit around or soak in the tub, laughing at the idea that everyone else is committing. There is also plenty of horrifically awkward flirting which, in one instance, leads to bizarre confusion over a specific emoji’s meaning.

It’s impressive how The Circle (which, perhaps unsurprisingly, originated in the UK) manages to remain compelling throughout the whole first season. Everyone seems real — even when they’re being someone else, they’re refreshingly honest about why they’re choosing not to use their real photos (frequently because they’re aware of the types of looks and body types that society favors). It’s a rare reality show, and it’s one worth marathoning before the finale.

Have you entered The Circle? if so, what do you think?