After a decent enough start, the Arrowverse‘s “Crisis on Infinite Earths” crossover came to a truly super close on Tuesday night, with a most heroic sacrifice followed by a second team-up event that eventually led to arguably the coolest DC nod one could hope for.

In the opening hour, Spectre fka Oliver Queen visited the long- and frustratingly stranded Paragons at the Vanishing Point. After somewhat explaining what he has become, Spectre “unlocked” Barry’s potential so that he could again access the Speed Force to, among other things, whisk Kara, Ryan and Lex to Mar Navu’s planet Maltus, 10,000 years into the past, to prevent him from opening the door to the anti-matter universe and thus create his evil doppelganger.

Also in Barry’s travels, he bumped into the DC movies’ own Flash (detailed here) and visited several key moments from the other Paragons’ lives, so as to keep them from “falling” out of the Speed Force and into the anti-matter universe (or something). Meaning, he showed up during the denouement of “Elseworlds” (where he finally learned of the deal Oliver made to save him and Kara from dying), when Oliver was quarreling with new friend Supergirl, when Diggle and Laurel were mourning a freshly slain Sara… and so on. 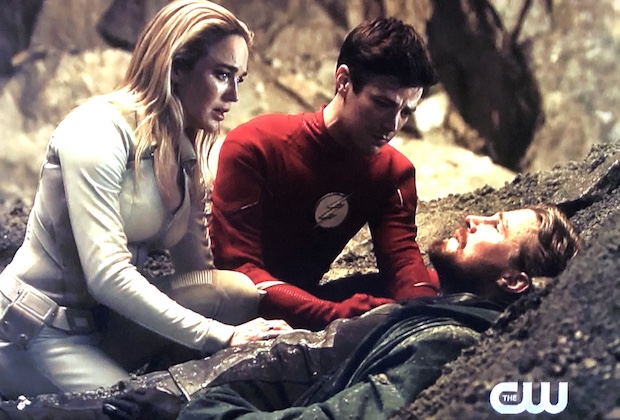 Ultimately, at the climax of Part 4, the Paragons convened at the dawn of time to slug it out with a swarm of Shadow Demons, while Spectre went mano a mano with the Anti-Monitor. Spectre gained the upper hand and “lit the spark,” at which point the Paragons knew to “fan the flame” — by focusing their mental energy on the beam of light shooting from Spectre’s eyes into the sky. The teamwork worked and the Anti-Monitor was (seemingly) vanquished. Spectre/Oliver, however, was quite down for the count — though he didn’t expire until sharing a private moment with Barry and Sara in which he charged them to keep fighting the good fight, because the new world he has just birthed will need them.

But about that new world….

Kara wakes up her apartment, dazed and confused — especially when she looks outside to see that all is right in National City.  But she realizes things are indeed a bit wrong when she races to a ceremony where the Nobel Peace Prize is being presented to… Lex Luthor, whom she learns from Alex is not just a good guy but “the best guy.” Looking to punch something, Kara dashes off to deal with a commotion at the pier, caused by someone she learns is the Weather Witch — but The Flash zooms over in time to vanquish his own rogue. After signing an autograph for “crossover” superfan Marv Wolfman (aka the author of the “Crisis” comics), Barry and Kara realize that they now share an Earth, a development that J’onn arrives to confirm. 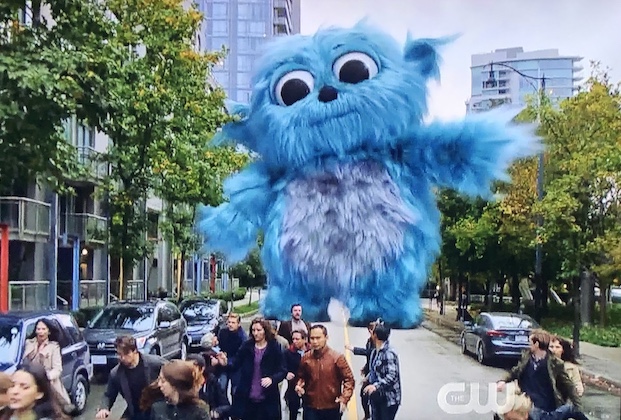 J’onn has been going around from city to city to use his power to update the memory of all compatriots, so that they can be aware that the multiverse has been destroyed and replaced by a new one (where the heroes we know all live on Earth-Prime). Barry and Kara race to the Star City bunker to hang with the gang, only to realize from a hangdog Sara, Diggle, Rene and Dinah that Oliver did not manage to save himself when creating this new world. Being a Legends episode after all, the mourning is interrupted by a giant Beebo’s rampage through downtown Star City — though the heroes soon realize that the callback was but a distraction fabricated by Sargon the Sorcerer, as he pulled off a jewelry heist.

While the bunker celebrates, Barry speeds off to find Sara, who is melancholy that anyone who knew the old her, pre-Queen’s Gambit, is now gone. The tender moment is cut short by the swooping in of a Shadow Demon. Back at the bunker, Nash fka Pariah reports of an anti-matter energy spike, meaning that the Anti-Monitor did not perish as Oliver did in that seismic blast. Ray, Ryan and Nash combine their brains to fashion a “shrink bomb” that will rearrange and condense the Anti-Monitor’s molecules until he is lost to the (ahem) “microverse.” Meanwhile, the other Paragons — plus Nia, Rene, Diggle and Alex — team up in a vacant lot to fight a new swarm of Shadow Demons. Soon, that spooky army swirls to form the Anti-Monitor himself. At first, he fends off the heroes’ heat rays, bullets etc; by creating a shield around him. But then the Anti-Monitor increases in size, to many stories tall. The Supes and J’onn launch an aerial assault, to some effect, buying time for Barry to use his fast hands to finishing assembling the bomb. The Atom then flies in, shrinks Superman to release him from the Anti-Monitor’s grip, and hands the bomb off to Supergirl to “throw it like a girl.” Kara does just that, successfully shrinking the giant foe until he blips away.

In the aftermath of the mighty win, the President of the United States (played not by Lynda Carter) speaks to the nation quite candidly about the worlds-saving bravery of Oliver Queen, the first known hero, and his friends. We then cut to the Diggles’ home, where we discover that Baby Sara (now a tyke) once again exists, alongside her brother J.J…. Lois summons Clark to deal with an issue involving their boys, plural… and then there is a worldwide moment of silence, for Oliver Queen.

Spectre delivers a voiceover about the creation of this new multiverse from darkness or some such thing, and we see the Earths where DC heroes such as Stargirl, Green Lantern, Swamp Thing, the Titans, Doom Patrol, Superman Returns‘ Man of Steel all reside…. Barry/The Flash meanwhile assembles Kara/Supergirl, Sara/White Canary, J’onn/Martian Manhunter, Kate/Batwoman, Clark/Superman and Jefferson/Black Lightning inside a forgotten STAR Labs facility, where Oliver’s costume is memorialized. Barry then unveils a table at which they can convene the next time the world needs saving (which Black Lighting realizes is occasionally).

As they sit there for the first time, they hear the chittering of a monkey in the rafters, as we spy an empty cage labeled GLEEK, and the Super Friends theme plays and a Hall of Justice-like exterior is revealed.