This week on The Good Doctor, Shaun must face the aftermath of his intimacy with Lea and how it effects his relationship with Carly.

The winter premiere picks up the morning after Lea comforted Shaun. She wakes up, having never left his motel room but still fully dressed, and asks if he wants to talk about last night. “You were in a pretty bad place, which is totally understandable,” she says. But Shaun assures her that he’s all better now. Then, on the way to the airport, Shaun reveals to Glassman that Lea spent the night in his room. “We just… held each other,” he says, but “lying in bed with her, it felt… different than it does with Carly.” Glassman senses that Shaun has a big decision ahead of him, then suggests that he doesn’t have much time. “You’ve got to figure it out soon,” he warns. “Sex or no sex, the wheels are in motion and someone is about to get run over.”

Back at the hospital, Shaun heads down to the pathology lab, where he is reunited with Carly. She asks why he didn’t return any of her calls while he was in Wyoming. He says he was busy, which is a truly lousy excuse. Despite this, Carly manages to maintain her cool. She acknowledges that her boyfriend struggles to understand people’s feelings, but a part of him must have known that it was wrong to ignore her. He offers no response, then asks that she expedite a patient’s panels. He then heads up to the MRI room, where Morgan tells him that it’d be a mistake to break things off with his girlfriend. 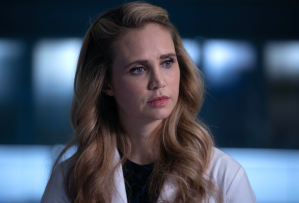 “Carly is smart, pretty, and the fact that she’s willing to deal with all of your stuff means you should be thanking whatever God you pray to that you ever met her,” she exclaims. “Lea is, well, a flake… She showed up on your doorstep without even giving you a heads up that she was coming back to San Jose. Then she needed to move out, but then she moves in, not to mention the whole ‘Let’s get drunk on tequila and I’ll teach you how to kiss, but I just want to be friends’ nonsense.”

Later that day, Shaun and Carly bump into each other in the elevator. “What am I doing wrong? Carly asks. “I never know where I stand with you. One minute, we’re sharing deep personal fears with each other, and the next, you’re running away because you can’t stand to touch me.” She asks if there’s anything going on with Lea, then Shaun takes a moment to collect his thoughts. “It’s different,” he responds. “I… like you, Carly. When I’m around you, I want to be impressive to you. I don’t feel like I have to impress Lea, like I do you.” 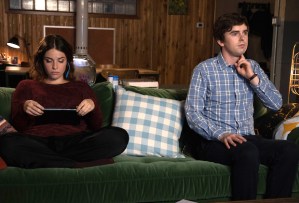 That evening, Shaun sits down at the nurses’ station and makes separate pros-and-cons lists for Carly and Lea. Andrews tells Shaun that he should go home, but Shaun finds it easier to avoid Carly at the hospital than it is to avoid Lea back at the apartment. He then asks Andrews how he knew that Isabel was the right woman for him. “It’s a cliche, but my heart sped up every time I saw her,” the attending answers. And so, Shaun takes his superior’s advice and heads back to the loft, where he sits down next to Lea and checks his pulse. It’s 60 beats-per-minute, which is well within the normal range.

At this point, we should acknowledge the Patient of the Week: Kerry (played by Strike Back’s Milauna Jemai Jackson) is a recovering opioid addict who needs corrective surgery to repair a comminuted leg fracture. Her husband has no idea that she was once dependent, and she refuses to proceed with the recommended surgery because she’s worried that she’ll relapse and lose everything after she’s administered a fentanyl-based anesthetic. Andrews, Shaun and Morgan move forward with an alternate procedure to repair the leg, but Kerry develops compartment syndrome in recovery. The only way to remedy the situation is to go back under the knife for the recommended procedure, which typically requires sedation. 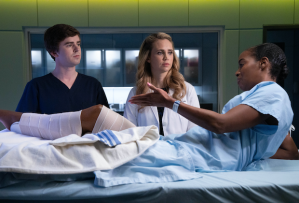 “No!” Kerry exclaims. “Any amount of pain is better than losing everything.” She wants them to move forward without an anesthetic, even if it puts her life at greater risk, just to avoid telling her husband that she’s an addict.

“How long can you keep secrets from the people you love before they stop being the people you love?” Shaun asks. “Every relationship has secrets,” she says. “When you have lost everything, but you still manage to find someone that makes you want to get up and live another day, you do whatever you can to hold on to them — even if it means burying a piece of yourself in the process.”

Kerry eventually comes around and tells her husband the truth (after Andrews finds a workaround to avoid breaking patient/doctor confidentiality), but maintains that she is not strong enough to avoid a relapse. As such, the doctors move forward without sedation. Shaun, meanwhile, takes what Kerry says to heart and goes to confront Carly. He approaches his girlfriend in the cafeteria and reads off his pros-and-cons list, then asks if she’s going to break up with him. “No,” she answers. “We had a fight. Couples fight. But I’m worried… I’m flattered that you want to impress me, but that is not worth anything if you feel like you can’t talk to me.” And so, Shaun comes clean. He tells her that Lea came in to comfort him and they fell asleep hugging. As to be expected, Carly is hurt. “We struggled with lying together for weeks, and you did it in one night with Lea?” she asks. “Yes,” Shaun replies. “But she’s a close friend and she wanted to be there for me.” Carly tells Shaun that she needs some space, then gets up and walks away. 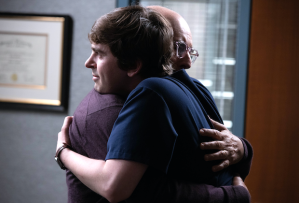 In the following scene, Shaun has a full-blown panic attack in Glassman’s office. “Is everyone going to leave me?” he asks. “My dad didn’t want me! My mom chose him over me! Carly now hates me! Lea will get tired of me! You will get sick of me! I do everything wrong!” Glassman gets a hold of Shaun and tells him not to say any of that ever again. He tells him that he’s going to get through this and that he’ll always be there for him.

“I could not be more proud of you,” Glassman says. “You hear that? And I could never get sick of you.” At this point, an overwhelmed Shaun leaps at Glassman and wraps his arms around him. “You’re not getting rid of me, pal, OK?” Glassman continues. “I’m right here. I got you.” (This might have been my favorite Shaun/Glassman scene. Like, ever.)

At the end of his shift, Shaun finds Carly outside. They reminisce about the first time they met, then Carly tells Shaun that he’s the most genuine person that she’s ever met. He told her about what happened with Lea, “and that’s a good thing,” she says, but she worries that something like that could happen again. “I want to be with you, Shaun, but I don’t know how this works if you’re still living with Lea,” she says. “I know it’s a lot to ask, and if it’s too much, I understand.” She tells Shaun to take his time and think it over, but he already has an answer. He takes her hand and says OK. “I want to be with you. I love you, Carly,” he says.  Her face lights up, and she wraps her arms around him. 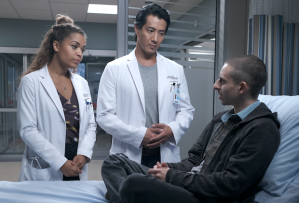 The midseason opener also provides an update on Claire’s mental health. She tells Melendez that she’s in therapy, and that her therapist thinks that she suffers from post traumatic stress disorder brought on by her childhood. Amid Claire’s road to recovery, she and Park work on a patient by the name of Luca (Hannah Montana‘s Moisés Arias), a drug mule who has swallowed dozens of heroin balloons. Park wants to turn him over to the feds, but Claire thinks he deserves a chance to avoid jail time and fix his life.

“Shouldn’t you be judging this guy the harshest?” Park asks. “You made it out just fine without breaking the law,” he says, referring to Claire’s messed-up past. “That’s not exactly true,” she answers. She tells Park and Melendez that Breeze used to disappear for days, and she’d be forced to shoplift just to make sure that she was fed. One time, Claire’s backpack broke and all of the soup and oatmeal she’d stolen fell out in front of a security guard, who saw she was desperate and let her go with only a warning. “If she hadn’t given me a break, I wouldn’t be standing here as a doctor, discussing this with you,” Claire says. This convinces Melendez that there might be a way to save Luca without ruining his life or breaking policy. They ultimately arrange to keep whatever medical waste they collect from Luca, then discharge him before the pathology report comes back and they are obligated to alert the police.

Later that day, Claire visits with her therapist. She says she didn’t just save a life today; she might have changed one. Seconds later, she receives a page and returns to the hospital, only to discover that Luca faked a seizure; while staff responded, someone else broke into a storage locker — and the only thing they took was Luca’s specimen. Because Luca gave them a fake name, the cops have no way to catch up to him. Claire feels awful, but Melendez knows that she was just trying to do right by her patient and got duped. “There are worse qualities in this world than trying to see the best in people,” he tells her. “If you’re a good person, every now and again you’re going to feel like an idiot, and today you were wrong, [but] I am still grateful that I work with you.”

What did you think of The Good Doctor Season 3, Episode 11? Grade the winter premiere, then sound off in the comments.