Lincoln Rhyme was a kickass criminal profiler before one of the bad guys he was tracking decided to take him out. He survived, but the (justifiably) angry former cop can’t use his legs, and he’s determined never to be involved with serial killers again… until the one who incapacitated him resurfaces.

And that’s where things stand at the start of Lincoln Rhyme: Hunt for the Bone Collector, which premiered Friday on NBC and stars Grimm‘s Russell Hornsby as the titular sleuth. In a moment, we’ll want to know what you thought of the thriller based on Jeffrey Deaver’s novel, The Bone Collector. But first, a quick recap:

Three years after Lincoln’s incident, a New York City police officer named Amelia Sachs (Midnight, Texas‘ Arielle Kebbel) answers a call to find a dead man strung up in a subway tunnel. She notices a piece of fabric on the track near him and is nearly hit by an oncoming train trying to get it, but she winds up not getting hurt. “I was trying to preserve the integrity of the crime scene,” she explains.

Det. Michael Sellitto (The Sopranos‘ Michael Imperioli) brings Amelia to meet Lincoln, explaining that she’ll be able to offer a special perspective because she was first on the crime scene. The retired cop is bedridden but has several technological advances to help him experience the world around him, including a huge screen that lowers over his bed. Sachs already knows what Rhyme is going to say: “It’s him, isn’t it?” Lincoln confirms that the man who murdered the subway victim is the Bone Collector, aka the same killer who paralyzed him. 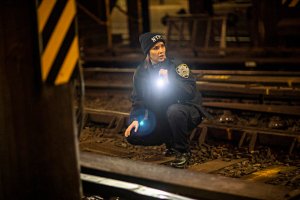 We learn that Lincoln memorized so much about New York City — in a manner similar to Sherlock Holmes and London — that he became one of the greatest detectives in town. He decides that Amelia will be his eyes and ears out in the world, thanks to a body camera that gives him a 360-degree view of anything she encounters. They work together — aided by Lincoln’s in-house tech team — to discern that the subway killing was done by a Bone Collector copycat. Unfortunately, the copycat also has access to all of the city’s closed-circuit cameras. So when he takes notice of Amelia, it’s only a matter of time before he’s stalking her and her younger sister, then kidnapping Sachs’ sibling.

Eventually, Rhyme and Sachs figure out that her sister is being held in a water tower on top of a building that used to house the city’s oldest department store. Amelia saves her sister, and all is well. And when the police chief — who was Rhyme’s instructor 10 years before — offers him a job to work as a civilian consultant, he agrees… with the stipulation that Amelia be his permanent point person.

Later, we see Lincoln videochatting with a boy who turns out to be his son. The kid and Rhyme’s wife are “thousands of miles away,” she reassures him. “We couldn’t be any safer.” The warm moment is made even better when Lincoln later realizes he can wiggle his toes after years of not being able to do so.

But he doesn’t know what we do: That the original Bone Collector (Aquarius‘ Brian F. O’Byrne)  is out and about, pretending to be a mild-mannered everyman married to a mild-mannered everywoman (Grimm‘s Claire Coffee). And a flashback shows us that the serial killer and Rhyme were in the same law enforcement class a decade before (when Lincoln was kind of a jerk to him). At the end of the episode, the murderer has a new victim chained up and dying in his wine cellar… and a box, with Lincoln’s name on it, all set to go.

Now it’s your turn. What did you think of the premiere? Grade the episode via the poll below, then hit the comments!