Long-distance relationships can be tough, especially when your boyfriend is being held prisoner in the bowels of the underworld. Never mind that his body is also being inhabited by Satan, who just so happens to be your biological father.

Unfortunately, this incredibly specific scenario is precisely the conundrum Kiernan Shipka‘s titular witch is facing when Chilling Adventures of Sabrina returns for Part 3 on Friday, Jan. 24. And now, in advance of that momentous television event, Netflix has released a sexy little music video which previews the supernatural shenanigans awaiting Sabrina & Co. later this month.

Picking up where Part 2 left off back in April 2019, Sabrina — along with her crew of trusty humans, including her surprisingly chill ex-boyfriend — remains determined to rescue Nick and set things right. Also on tap for Part 3: Sabrina and Roz become cheerleaders, the gang forms a garage band, and a literal carnival of pagans arrives in Greendale looking to resurrect an ancient evil.

We also have new spoiler-y photos that reveal several of the fresh faces CAOS will introduce in Part 3, including Caliban (played by newcomer Sam Corlett), a prince of hell who challenges Sabrina’s claim to the throne, and a carnival worker named Robin (played by Riverdale‘s Jonathan Whitesell), who appears to develop feelings for Theo. Click here to check ’em all out. 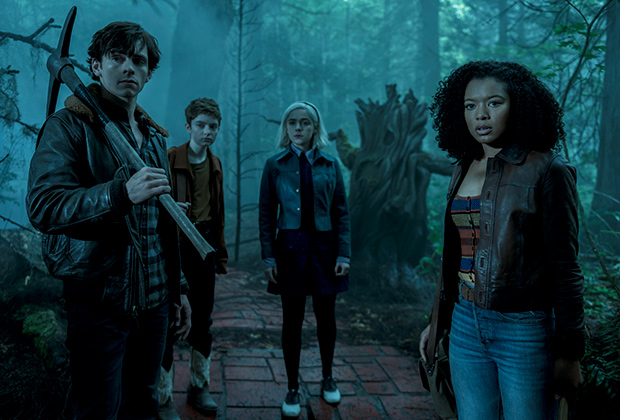 Hit PLAY on the video above for your first taste of CAOS Part 3, then drop a comment with your hopes for Sabrina’s inner circle (of hell).