In you happened to accidentally sleep through Chilling Adventures of Sabrina Part 2, the teenage witch was happy to bring you up to speed atop the Netflix drama’s explosive finale.

“Mrs. Wardwell manipulated me into fulfilling a prophecy, one that’s meant to bring about the end of the world,” she explained. “Because of me, the Dark Lord has assumed his original form and is somewhere in Greendale, and the gates of hell are going to open, releasing the hoards of hell.” Anything else?

“According to the prophecy I found, his plan is to enslave the tribes of human and witch kind and to rule over everything with his demon army,” Nick added. But wait, there’s more…

“She’s meant to rule by the Dark Lord’s side… as his queen.” Ambrose could barely say that last part without vomiting, a reaction shared by Hilda and Zelda upon fully digesting the news.

Then again, reacting to difficult news was pretty much the theme of Sabrina’s second finale. Let’s go over a few of the hour’s game-changing revelations:

* Nick has apparently been She’s All That-ing Sabrina this whole time, getting close to her at the behest of the Dark Lord, while secretly falling in love with her for real. Spitting in his face felt like the appropriate response.

* Speaking of the Dark Lord, he’s sort of Sabrina’s father, too. When Edward and Diana had difficulty conceiving, they turned to him for assistance, and as Hilda explained, Diana always wondered if the baby was really Edward’s. (Taking your “daughter” as your “queen”? I don’t care how many quotation marks I put around those words — that’s messed up, even for Lucifer.)

* “Mrs. Wardwell” also dropped the facade and revealed herself to be Lilith… but we already knew that.

In the midst of all this chaos, Father Blackwood went fully off his rocker, poisoning everyone in the Church of Night except for Prudence and the babies, though I wouldn’t count on the four of them starting over as a happy family. “I will kill you for all that you’ve done. Wherever you go, I will find you,” Prudence told him before asking the Spellmans for help rescuing the coven.

But it was the Spellmans who needed rescuing when their first attempt to stop Lucifer completely blew up in their faces. In fact, Sabrina could only convince her “father” to spare everyone’s lives by agreeing to blow Gabriel’s horn, thus heralding in the End of Days. 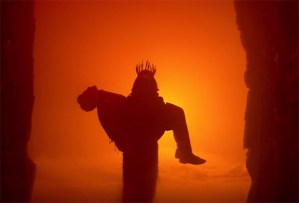 Fortunately, these witches are nothing if not resourceful. Their next plan — which involved, for reasons unknown-but-appreciated, a performance of “Masquerade” from The Phantom of the Opera — proved much more successful. Though they couldn’t (literally) trap him in a neat little box, Nick was able to bind Lucifer’s spirit inside of him. After being put under via Ambrose’s sleeping spell, Nick’s body was carried into hell by Lilith, who also returned Sabrina’s powers (and Mrs. Wardwell’s body!) in exchange for her crown.

It’s probably worth noting that Nick, despite being the Dark Lord’s lackey for a hot minute, was able to sweet talk his way back into Sabrina’s life. “I love you, Spellman,” he said. “You taught me how to love.” (Sad!)

You also have to hand it to Sabrina’s mortal pals, who really carried their weight against the impending apocalypse. Between Roz’s visions of the demonic sigils, Harvey’s drawing skills and Theo’s keen eye for design, the three humans were able to prevent the gates of hell from opening all on their own. Gold stars all around!

The finale ended with a comforting scene: Sabrina and her friends gathered around their usual table at Dr. Cerberus,’ only they weren’t talking about kid stuff anymore. Dubbing themselves the “Fright Club,” Sabrina’s pals volunteered to help with any future supernatural missions. Luckily for them, she already has one in mind: “Let’s go to hell and get my boyfriend back.”

Your thoughts on the finale’s many (many, many, many!!!) twists? Grade the episode and Part 2 below, then drop a comment with your hopes for Part 3?