David’s hospital stay on Thursday’s Evil was a very scary endeavor… and we’re not talking about how much he’ll pay before he meets his deductible.

The priest-in-training regained consciousness after his stabbing to realize that he was at the mercy of a sadistic nurse with a diabolical penchant for murdering black men. And while he fought for his life (and tried to discern good-vs-evil shenanigans from the drug-induced visions that plagued him), we learned that the person behind the creepy virtual reality goggles avatar girl Rose390 was the same person who attacked David (as well as the subject of a former exorcism investigation), and that David and Ben previously worked with another psychologist named Judy James (played by Megan Ketch, Jane the Virgin).

TVLine chatted with Evil co-creators Robert and Michelle King about what’s ahead as the CBS drama’s season finale approaches, and why David — while holding himself to a, shall we say, higher authority — is allowed to be as flawed as the rest of us. 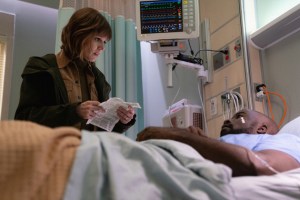 TVLINE | You’ve said that David’s guilt over sleeping with Renée — and knowing that other people now know about it — will be a through line in the second part of the season. Will the public nature of his weakness make him second-guess himself more?
ROBERT KING | Yes. Two things there. One of which is, that is true, and we want to find, always, the metaphor for the show. The show often finds that psychological conditions find a metaphoric reality, so the very fact that the guilt about Renée and sleeping with her is expressing itself in this person who comes and tries to kill him I think is all of a piece. And the second thing is, look, I’m someone who believes in confession, who believes that human beings can’t help but do bad things because they are you know, they are fallen. I saw some religious people kind of taking the show to task by showing that, “Oh, you’re the priest who sleeps with someone.” Well, first of all, he’s not a priest. And yes, he should not be sleeping with her, but he goes to confession. So many people kind of think TV only has to show pure people, or it’s problematic about religion, and I just think that’s missing the point.
MICHELLE KING | Right. The lay people in our shows are also not perfect, and we wanted to extend the same kind of treatment to the religious, to keep them real.

TVLINE | We’ve seen so many examples over the years of people who choose these lives and then have a very hard time maintaining the incredibly inhuman standard that is set before them, right?
ROBERT KING | I think so. Yeah. I mean, in many ways, we’ve talked a lot about him being imbedded with Marines and so on, and we were trying to make a connection: Diligence in religious matters is equivalent to those who do very tough things and require very tough things of themselves. Yes, people will fail. 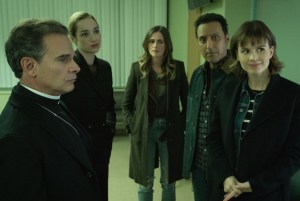 TVLINE | Li Jun Li is back in this episode, when Grace warns David of danger. What can you tease about Grace’s involvement in the rest of the season? Will we see her again?
ROBERT KING | Well, first of all, part of this was a reaction to her performance. We just fell in love with her.
MICHELLE KING | Yeah.
ROBERT KING | There’s this odd sense of holiness about her that’s like Song of Bernadette. What we really liked about [Grace] is that she is a human being, but there was also something that was authoritative about her, whether you call it prophecy or her intuitiveness. So what we thought, if she’s still living on in David’s mind as this presence that’s is the closest he’s seen on Earth to God, I guess. She’s not a priest. She’s not a nun. She just probably just goes to church every Sunday. But what he sees in her is someone who God talks to, and I think that just means so much to him that he’s kind of kept her around, as, like furniture in his brain, you know? And the woman who acts the part is just so amazing.

TVLINE | I noticed that Kristen’s husband, Andy, isn’t in the episode. Is Kristen feeling like he’s on the periphery of her life? What’s her mindset as we move past toward the end of the season?
MICHELLE KING | No, I think she does not see him in the periphery. She has a very full life, a career that is exciting to her, and of course, the four kids. No. She considers her marriage important.
ROBERT KING | And we’ll see him come back in a big way in [Episode] 12. Part of it is that Patrick Brammall has his own show, No Activity. Obviously, we are constantly pulling him away from that to do our show, so part of it is living within what we can do with that.
MICHELLE KING | The realities of producing. [Laughs]