Ken Jennings took an early lead on Night 1 of Jeopardy! The Greatest of All Time — but was he able to keep it in Night 2?

The primetime special brings back the long-running quiz show’s three all-time top earners: Jennings, who still holds the record with his famous 74-day winning streak (total winnings: $3,370,700); Brad Rutter, who amassed the show’s top money total with $4,688,436 — and has never lost a Jeopardy! game to a human opponent — and James Holzhauer, who set multiple records last year on his way to setting the mark for the top single-day winnings in show history (total winnings: $2,712,216).

Those three will face off in a tournament of three to seven primetime matches, with the first to win three nights earning the $1,000,000 grand prize and the title of “Jeopardy! The Greatest of All Time.” (The two runners-up will receive a consolation prize of $250,000 each.) The episodes are a full hour long as well, as opposed to Jeopardy!‘s usual half-hour format, and of course, longtime host Alex Trebek is on hand to supply the questions… er, answers, that is.

As revealed during Tuesday’s tournament premiere, the three contestants are competing for points instead of dollars in each episode, and each installment includes two Jeopardy! games instead of one. Whomever has the highest combined point total after two games is named that night’s winner, and Jennings went into Episode 2 with the tournament’s first victory under his belt. 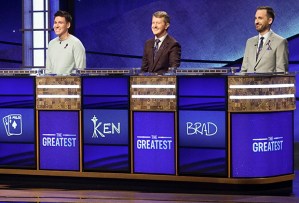 On Wednesday’s episode, though, it was Holzhauer who got off to a strong start. He dominated the first round of Game 1, ringing in before Jennings on most questions (and getting nearly all of them correct). At the end of the Jeopardy round, Holzhauer led with 9,600 points, while Jennings racked up 3,200 and a mostly silent Rutter had just 1,200.

The Double Jeopardy round was a bit more competitive, as both Holzhauer and Jennings each went all in on a Daily Double — complete with the poker-chip hand gesture! — and each got their questions correct. Still, even though his competitors rang in a bit more during the second round, Holzhauer maintained a substantial lead the entire time — and he got the Final Jeopardy question right, too. At the end of Game 1, Holzhauer had 44,314 points, while Jennings closed the gap a bit with 40,000 points and Rutter trailed with 14,400 points.

Next up: Game 2! Featuring a category about TV revivals and reboots! (Your recapper is proud to announce she went five for five on those.) This time, the Jeopardy round was much more of a nail-biter, with all three gentlemen getting their fair share of responses. At the halfway point, Jennings narrowly led with 6,800 points, but Holzhauer was close behind with 6,400, and Rutter remained in third with 3,800.

Speaking of Rutter, the Double Jeopardy round wasn’t very kind to him: After betting everything on a Daily Double that he got wrong, Rutter missed several questions in a row and ultimately ended the round with -3,600 (!) points — and, as is Jeopardy! policy, he couldn’t participate in the Final Jeopardy round, leaving his Night 2 point total at the 14,400 he had amassed in the first game. Jennings, meanwhile, got the Final Jeopardy question wrong, and he ended the episode with 57,400 total points. But it wasn’t nearly enough to beat Holzhauer, who got the final question correct and earned a staggering 82,414 total points for the night.

For those keeping score at home, Jennings and Holzhauer are now tied with one win a piece, while Rutter is still seeking his first victory. Jeopardy! The Greatest of All Time continues Thursday at 8/7c on ABC.

What did you think of Wednesday’s Jeopardy! competition? Hit the comments!