It was a brain battle for the ages on Tuesday, as three former champs faced off in Night 1 of the Jeopardy! The Greatest of All Time primetime special.

The special brings back the long-running quiz show’s three all-time top earners: Ken Jennings, who still holds the record with his famous 74-day winning streak (total winnings: $3,370,700); Brad Rutter, who amassed the show’s top money total with $4,688,436 — and has never lost a Jeopardy! game to a human opponent — and James Holzhauer, who set multiple records last year on his way to setting the mark for the top single-day winnings in show history (total winnings: $2,712,216).

Those three will face off in a tournament of three to seven primetime matches, with the first to win three nights earning the $1,000,000 grand prize and the title of “Jeopardy! The Greatest of All Time.” (The two runners-up will receive a consolation prize of $250,000.) The episodes are a full hour long as well, as opposed to Jeopardy!‘s usual half-hour format, and of course, longtime host Alex Trebek is on hand to supply the questions… er, answers, that is. 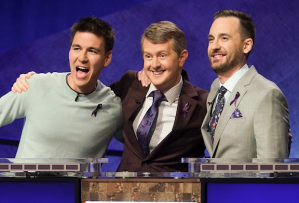 Night 1 got off to a fast and furious start, with Holzhauer claiming a narrow lead with 7,800 “points” (not dollars) after the initial Jeopardy! round. (No one even missed a question!) But in Double Jeopardy, Rutter went for a true Daily Double and missed (!), taking his total down to zero, while Jennings jumped out to a big lead with a correct Daily Double response. He then got hot and steamrolled to a 33,200 total after two rounds, fully doubling Holzhauer’s total in second place. After Final Jeopardy, he led with 45,000, followed by Holzhauer with 33,200 and Rutter with 10,400.

But each night of the tournament consists of two games, with the points from each added up to determine a winner, and Holzhauer edged out Jennings 8,200 to 7,800 after Game 2’s first round. Rutter fell behind by zeroing out twice on a pair of incorrect Daily Double responses (ouch), and Holzhauer held a slight lead going into Final Jeopardy. He won Game 2, but Jennings’ big Game 1 win helped him eke out the overall Night 1 victory, with a total of 63,400 to Holzhauer’s 63,200. One down, two more to go! (The tournament continues Wednesday at 8/7c on ABC.)

How are you liking this Greatest of All Time tournament so far, Jeopardy! fans? And who’s your pick to win the whole thing?