“This is like watching a car crash,” quipped Stevie midway through Tuesday’s sixth and (sniffle) final season premiere of Schitt’s Creek. And what a hilarious and heart-tugging car crash it was, too. Not only did a “near-death” experience prompt Moira to say goodbye to something that she loved more than her wig wall, but Alexis’ plans to meet Ted in the Galapagos took an unexpected turn, and a visit to David and Patrick’s dream wedding venue led the couple to contemplate tying the knot under a highway overpass. Join TVLine in Moira’s closet, won’t you, and we’ll review all of the doings and “I doings” from the start.

‘REMIND ME TO REPRIMAND THAT LATCH; IT’S BEEN AWFULLY MOODY TODAY’ | As the episode began, Alexis was miffed to learn that David considered touring wedding venues to be such an incredibly intimate endeavor that he hadn’t invited her. Oh, but he had invited their father! And when Moira stuck her head out of the closet in which she’d been ensconced since being informed a week earlier that The Crowening would never take flight, Alexis learned that he’d invited her, too! (Though “sadly, I won’t be able to squire you for today’s wedding-venue peregrination,” the grieving actress said.) Harrumph! “Does nobody care,” Alexis exclaimed, “that I’m going to be gone for six months?” At that, Patrick asked his future sister-in-law to tag along, which served her a golden opportunity to hit up the grooms for a ride to the airport following their walk-through. After everyone had left the motel and Moira had returned to her hideout, the smoke alarm went off. “Is someone vaping?” she asked before panicking at the realization that she couldn’t get the closet door back open. When Roland burst in to save her from what turned out to be more smoke than fire, Moira was so thrilled to hear his voice that she cried, “Stevie! Thank God!” (Man, that shtick never gets old.) 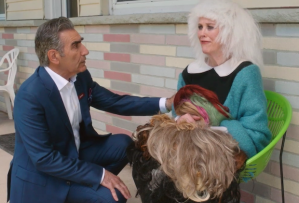 After making Roland rescue her wigs — in particular, Lorna, since “if she takes on smoke, she’ll never recover!” — Moira informed Johnny that she’d made an important decision: “It’s time my career took its final bow.” Armed with a fresh perspective, she even suggested that she and her husband take their first stroll to the creek of the show’s title and make their lunch a picnic. Once there, memories of a wellness retreat to which they’d traveled after Alexis had broken up with Sean Penn inspired the Roses to go skinny-dipping. Moira just had to call her agent first to make her retirement official. While she wandered off to find a signal, Johnny stripped down and got busted for indecent exposure by an off-duty policeman. Once the couple was reunited and Johnny released with his missus’ promise to keep him “habilimented from now on,” Moira excitedly revealed that The Crows movie had been picked up by a new streaming service called Interflix. Just when she was giving up on showbiz, “the industry comes crawling back to me on all fours,” she marveled. Now she knew that she shouldn’t quit. In fact, “I mustn’t — ever.” Though Johnny gently expressed his concern about the toll that all the highs and lows took on Moira, he swallowed his disappointment at this turn of events and sweetly supported his wife. 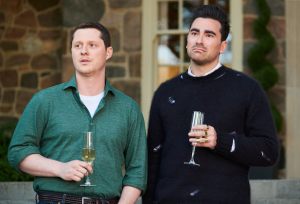 ‘WHEN WAS THE LAST TIME YOU FLEW ECONOMY?’ | When David and Patrick arrived at the prospective wedding venue with Stevie and Alexis, event coordinator Clive mistook everyone but the happy couple for the happy couple. When he’d gotten a gander at Stevie, who was unaware she was still wearing her show makeup from Cabaret’s wrap party the previous evening, “I thought someone had just come from her makeup trial,” he explained. Once the bubbly started flowing, it quickly became obvious that the fiancés couldn’t possibly find a more beautiful place to say “I do.” There was just one problem: the price. Erm, “is there a package lower than the bronze package,” asked David. “Perhaps a copper package?” Sensing the couple’s desperation, Clive offered them a 30-percent discount — in David’s mind, free! — if they could take advantage of a recent cancellation and get married in a month. Although Patrick worried that that wasn’t giving people enough notice, David insisted that they could pull it off. “I planned my ex-girlfriend’s intervention in less than an hour,” he noted. “And it’ll weed out the dead weight.” Um, as in Alexis, who would be in the Galapagos and unable to attend? Miffed anew at the implication, she stomped out, only for David to follow shortly thereafter to say that he and Patrick hadn’t taken the venue because they hadn’t wanted to “I do” it without her. What’s more, he added by the hardest, “I am remorseful over an action that I participated in” that had made her feel excluded. 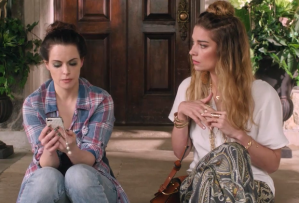 That settled, at least for the moment, Patrick discovered that the car wouldn’t start. As he and David reentered the venue to ask Clive for help, Stevie admitted to a distracted Alexis that she was a little jealous of her trip. Pay attention, Stevie said. “I think I might be giving you a compliment for the first time.” When Stevie looked at Alexis’ phone to see why she was having so much trouble checking in for her flight, she noticed that she was reading the date wrong — Alexis was leaving on 8/7, not 7/8. Which, in a way, was great — now Alexis could tell David that she’d messed up, and he and Patrick could take the venue on the discounted date. “I would literally rather sleep at the airport for a month,” Alexis replied. So when David and Patrick returned, she “selflessly” insisted upon pushing her trip back by a month. Of course, David immediately smelled a rat, and a classic Rose-siblings “car crash” ensued. Before it was over, the argument was interrupted by a horrifying sound. The nearby farm, Clive explained, processed pork on the first Sunday of every month — like the Sunday on which David and Patrick were to get hitched. Pass! Later, as the Roses convened over barbecue outside their motel rooms, Alexis shared that it was just as well that her trip had been delayed, since Ted’s place had yet to be lizard-proofed. Patrick, meanwhile, got a great idea: “What if we got married here” at the Rosebud? he whispered to David. “This place means something to you guys… [and] you could make it beautiful.” David was, shall we say, reluctant but at least promised to think about it. (In other words, it’s a done deal!) So, what did you think of the premiere? Grade it in the poll below, then hit the comments.