“What a unanimously disastrous day this is turning out to be!” cried Moira early on in the Season 5 finale of Schitt’s Creek. Though Alexis had done a bang-up job of generating publicity for Cabaret, the show’s leading lady Stevie had gone missing. But if the director thought that turn of events was calamitous, it was nothing compared to… well, keep reading; you’ll see.

‘GREAT TO KNOW YOU’VE BARELY GIVEN THIS ANY THOUGHT’ | As the Daniel Levy-written and co-directed episode got underway, Patrick brought David a breakfast of champagne in bed. “Is this what marriage is?” asked David, delighted. Yeah, no, Patrick replied; the bubbly was just left over from their picnic. “Coulda lied,” said David. Nonetheless, the two of them were on the same page about not running the risk of upstaging Moira by telling anyone about their engagement before the show that night. But maybe afterwards, David proposed, they could invite people over to the hotel, have a few drinks, discuss Cabaret for five or 10 minutes, then he could hold back tears as he gave an emotional speech to reveal that he and Patrick were getting married. By the time David’s done, “most people will be sobbing,” he added. And what would Patrick be doing while this is going on? “You can be topping off drinks.” #flawless

Later, Johnny made it clear just how completely and totally OK he was with Alexis going to the Galapagos with Ted for six months by checking on her every time she turned around and ultimately giving her a framed photo of the family that he suggested she put on her bedside table while she was away. When Moira happened upon the scene, she wondered why, if Ted was leaving that night, Alexis wasn’t leaving until the following week. “Because I’m in the show,” Alexis had to remind her mother. If Moira was distracted, you couldn’t blame her. Thanks to Alexis’ efforts, she’d been getting calls from the media all day about Cabaret. In fact, she was so impressed by her daughter the PR whiz that “after careful cogitation and two attempts to get Lizzie Grubman to do some pro-bono work,” she’d decided to have Alexis do all her publicity — including for the Crows movie, which was set to premiere in the fall. Um, Alexis would still be in the Galapagos then, she pointed out. “Poor planning,” said Moira as if Alexis could have known she’d be offered the high-profile gig. 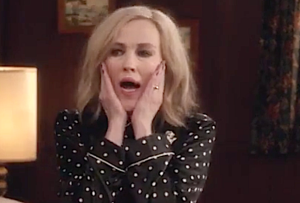 ‘I DON’T WANNA BE AN OPTIMIST HERE, BUT IT’S NOT LOOKING GOOD’ | In the Rosebud’s office, David presented Stevie with flowers and remarked upon how much courage he knew it had taken her to step outside of her comfort zone to play Sally Bowles. Wow, she replied. “I don’t think I’ve ever heard you use the word ‘courage’ before outside of criticizing someone’s style choices.” Needless to say, despite David’s best efforts to keep his lips zipped, he ended up reducing his BFF to tears by disclosing that Patrick had popped the question. Next thing we knew, Roland was in Johnny and Moira’s room giving a description of Stevie to the police — she was not only missing, she wasn’t answering her director’s calls. “I was a fool not to let Gwen understudy,” cried Moira, especially knowing how unaccustomed Stevie was to the “hot sting of the spotlight.” When she realized that David had been the last person to speak with her leading lady before she vanished, Moira had to ask her son: “Did you say anything that might have triggered her? You have that affect on people.”

After David admitted that he’d told Stevie he and Patrick had gotten engaged, thus also revealing the news to his mother and Roland — oh, and Alexis, who just happened to be within earshot a moment later — Moira went into a full-blown panic. We’re talking making-the-Home-Alone-face panic, that full-blown. (See above.) She was mad at David for dropping on her star such precipitous news, he was mad, period, since “this is not how the announcement was supposed to go!” and Alexis was mad at her brother because “this is the last thing I needed to hear today!” Wait, what? “When did this become about you?” David asked. Luckily, by that evening, he was able to report to Patrick at the theater that Moira had a Plan B to cover for Stevie — a Plan B that turned out to be Moira assuming the role of Sally. “I’m going to shimmy off the rust,” said the Sunrise Bay alum, already in costume, “and pray there’s still some dazzle within.” 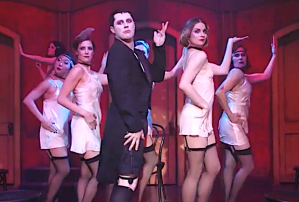 ‘STEVIE, I’D ASK IF YOU COULD HOLD US UP MORE, BUT I’M NOT A BIG FAN OF RHETORICAL QUESTIONS’ | Just then, Stevie arrived. She’d merely taken Moira’s advice to tune out the world — in other words, left behind her cell phone — and gotten stuck in traffic returning from an errand. “Were you planning on taking my place?” she asked her director. Um… “just dressed in theme to support,” Moira insisted. “That’s all.” During a brief moment alone with David, Stevie then shared that Patrick had asked for her blessing a few weeks ago, and had she known he was going to propose when he did, she wouldn’t have had to run out to get her pal… monogrammed towels. She assumed they’d move in together once they were married, she explained, and then, “I won’t be there to give you towels when you need them.” (If that isn’t the sweetest freaking callback to the origins of their friendship!) Just before the lights dimmed on the audience, Ted congratulated David on his engagement, thus tipping off Johnny, who might well have been the last person in Schitt’s Creek to know.

Once the curtain was raised, Patrick slayed with a groin-thrusting rendition of “Willkommen” (which was no surprise to anyone who’s heard Noah Reid’s crazy-good Songs From a Broken Chair album — and if you haven’t heard it, you need to). Backstage, Moira complimented Stevie on rocking a wig named Magdalena that she’d only ever loaned out once before, to David when he’d wanted to be Alanis Morissette for Halloween. But Moira’s Sally was troubled. “I wish I wasn’t watching it all happen from behind the desk, you know?” she said. “It feels like everyone’s growing up all around me.” Moira understood. She’d felt much the same before the Crows movie had come along. So to raise Stevie’s spirits, she made what may be the show’s most endearing confession since Patrick told David, “You’re my Mariah Carey”: “I never thought I’d say this about anyone in this town, but you… you’re very, very cool.” Needless to say, off that revelation, Stevie went out on stage and performed “Maybe This Time” with such breathtaking emotion that I kicked myself for not waiting until the finale to submit Emily Hampshire for Performer of the Week/Honorable Mention kudos. 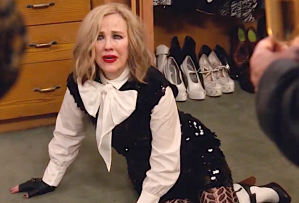 ‘IT’S TIME FOR TED TO GALAPAGO NOW’ | At the after-party in the Roses’ rooms at the motel, Johnny offered his congratulations. “Well, you dazzled tonight, sweetheart,” he said, prompting both Moira and (fleetingly) Stevie to reply, “Thank you.” (Which might have been the closest we’ve ever come to seeing Stevie acknowledge her inherent awesomeness.) Nearby, Alexis bid Ted adieu for now. “I can’t wait to sip pina coladas with you,” she said. Even though he’d clearly told her a lot that that wasn’t what the Galapagos were like. Finally, David attempted to make his and Patrick’s announcement but was stymied at every turn, whether by Roland and Jocelyn beating him to the punch or by Moira getting a call. “It’s most likely press. I already know your engagement news,” she said. So carry on. Only when David tried to, his mother howled from the other room. What was it? A bad review? Worse. “They shelved the Crows movie,” she said. “It’s over.” With that, she crawled into the closet and shut the door behind her to sob. So, what did you think of the finale? The Crows movie can’t be dead-dead, right? And if Season 6 ends with David and Patrick’s wedding, do you think Alexis and Ted will tie the knot with them? Grade “Life Is a Cabaret” below, then hit the comments.