There’s a civil war brewing at the Salvatore School when Legacies returns on Thursday, Jan. 16 (9/8c). And the battle will be fought… with dodgeballs.

OK, that’s probably a bit of an overstatement, but there will still be plenty of sports-themed shenanigans to enjoy, as you can see in TVLine’s exclusive photos from the show’s first hour of the new year. Per the episode’s official description, “Alaric enlists Landon’s help to find out if Sebastian is a threat to the school.”

Elsewhere in the episode, “The Necromancer sets his plan for revenge in motion” and Hope offers to help Josie learn more about the mora miserium in attempt to “mend fences.”

Speaking of The Necromancer, Ben Guerens’ fan-favorite character returned in the final moments of Legacies‘ fall finale, revealing himself to be one of the hooded figures that’s been lurking around Mystic Falls as of late. And because we all know he’s not one for subtle entrances, The Necromancer made his presence known by beheading poor Clarke. (Yes, I said “poor Clarke.” That Christmas episode really did a good job of presenting Landon’s now-headless brother in a new light.)

And he’s just one of several villains returning to the fold in 2020. Chris Wood will also recur as Kai Parker, the Saltzman twins’ uncle whom we first met on The Vampire Diaries, beginning with Episode 12.

Keep scrolling for another exclusive first look at Legacies‘ return, then drop a comment with your *ahem* hopes for the rest of Season 2 below. 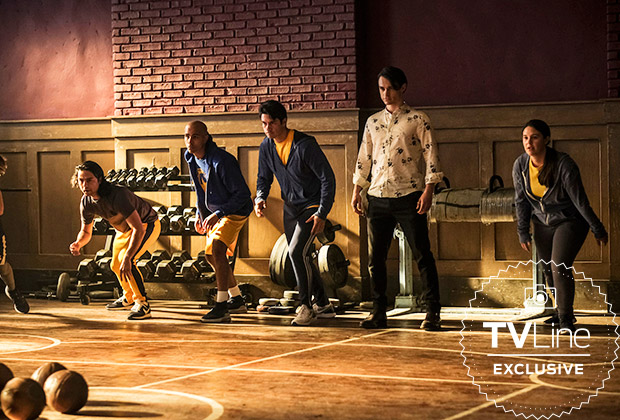