mixed-ish star Christina Anthony was in elementary school on Jan. 28, 1986. She remembers, because it was the day the Space Shuttle Challenger exploded 73 seconds after takeoff, killing everyone on board.

“I went to parochial school at the time,” she recalls. “We were all watching in the classroom. It was exciting, because the teacher rolled in the TV on the cart. We saw the explosion when it happened. We didn’t know it was an explosion. And then I remember another teacher coming in the room, and my teacher turning it off. She had us say a prayer, and honestly, that was it. There was no grief counseling. No one came to the school. Like, we didn’t do anything.”

Anthony will revisit that terrible moment in American history in Tuesday’s episode (9/8c), which centers on the tragedy and how various members of Bow’s family react to it. We spoke to the actress, whose TV credits include Why Women Kill and Key and Peele, about how the Challenger disaster moves Denise to make amends for past wrongs… and the unlikely person with whom she winds up processing her grief.

TVLINE | The synopsis of the episode makes it seem like Denise will be doing some self-examination in a way we haven’t seen happen so far this season.
For sure. I think Denise presents like a really fun, bold, easygoing woman, but this episode, we have a chance to see that she does have texture and integrity, and she’s a full woman. 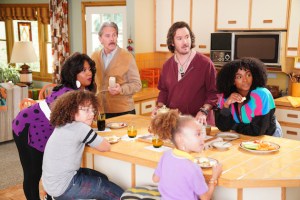 TVLINE | The tragedy spurs her to look at her life and put right some wrongs she’s perpetrated — is that the gist?
Yeah. That’s exactly it. This idea of feeling your own mortality is what happens. I liken it to now how the celebrity dies, and people start to post on Instagram and Twitter about the first time they heard that person’s album or the first time they went to their concert. They don’t know them. They’ve never seen them. They’ve never been in the same room, but [they] somehow [want to] connect with other people about how this tragedy affects you. And then also wanting to live life to its fullest from this day forward and be better, I don’t think that’s anything new. That’s what Denise is going through. She just doesn’t have social media, so, she has to literally go out and start contacting people individually, one by one, being better. [Laughs]

TVLINE | It brings to mind the show My Name Is Earl. How does it go when Denise starts to make contact with these people that she wants to apologize to?
Interestingly enough, it’s a good example of how not to properly give an apology. [Laughs] I don’t want to get too much into it, but she doesn’t get reactions. She just dumps emotionally and then leaves, but isn’t that the nature of Facebook? Isn’t that the nature of Twitter? Like, aren’t we just output, output, output, and not looking at the comments if we don’t feel like it?

TVLINE | She and Harrison come into each other’s orbits, which hasn’t happened very often so far in the show.
You’re exactly right. This is our first two-person scene together, Gary Cole and I. He’s just an idol to me. It’s hard to reconcile it, too. Like, I adore Gary Cole in real life. As a comedian and an improviser, he is just the gold standard. But obviously Denise and Harrison are opposite sides of the same coin, and so he’s a nemesis for her So I was torn! [Laughs] …You get to see them go head-to-head, and I think people are going to be surprised the first time that they get to be alone and out of the earshot of the children, especially. I think people are going to be surprised at what they talk about.