Minor spoiler alert: If you haven’t seen the second episode of YOU Season 2, you might want to turn back now. Unlike Joe, we’re actually warning you.

When you’ve killed as many people as YOU‘s Joe Goldberg, your past is bound to haunt you — often literally, as is the case in the Netflix drama’s now-streaming second season.

Guinevere Beck, the object of Joe’s twisted affection in Season 1, makes a ghostly appearance in the second episode of Season 2; her arrival is triggered by Joe falling back into his old ways, specifically when he murders a finger-snatching thug named Jasper.

And she comes bearing a message for her killer ex-boyfriend: “Sometimes we hurt the one we love, right? You’re not afraid Love will hurt you — you’re afraid that you’ll hurt her.” 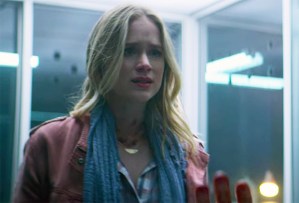 “It was a bit surreal,” Penn Badgley tells TVLine of having actress Elizabeth Lail back on set. “It was a reminder of how much things have changed. When we started working on Season 2, the show was so established and I was so familiar with it, but every other person and place and thing was different, which is not the case with most TV shows. It was strange to be like, ‘Wow, we really just kept on going. And it’s very different now. And you’re not here. And you seem to be the reason for the last one.’ She used to be ‘you!'”

Your thoughts on Beck’s haunting cameo? YOU‘s second season in general? Grade it below, then drop a comment with your full review.