Conrad Hawkins might be out of a job, but he’s not letting unemployment keep him down. (In fact, he’s practically floating!)

TVLine has an exclusive first look at The Resident‘s winter premiere, which will find Matt Czuchry’s titular doc figuring out his next step after being terminated from Chastain Park.

During the episode, Conrad distracts himself from his firing by accompanying a muscular dystrophy patient on a zero gravity adventure. But if the photo below is any indication, Conrad’s afternoon of weightlessness will take a worrying turn, as another participant in the activity seems to need medical attention.

According to executive producer Todd Harthan, Conrad will be in “new territory” in the wake of his firing, which came down after he broke Chastain’s rule regarding suicidal transplant patients.

“Initially, [Conrad] does look like he’s determined, but when he steps outside the walls of Chastain, it dawns on him that he’s alone,” Harthan previously told TVLine. “We’re going to live in that space — not just for the opening minutes, but for some episodes to come. We don’t want to rush through this part of Conrad’s struggle.”

Elsewhere in the Fox drama’s return (Jan. 7, 8/7c), new chief of surgery Dr. Cain puts the doctors on a commission-based pay system, while Mina struggles to take care of Adaku’s baby and Dr. Bell’s supplement company gets its big break.

Scroll down to see a second exclusive photo from The Resident‘s winter premiere, then drop a comment with your thoughts! 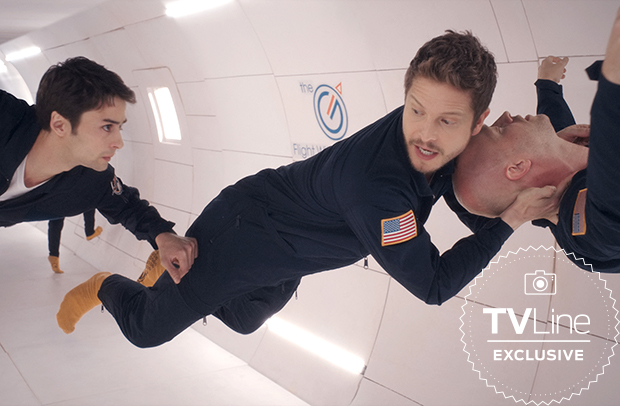