Tuesday’s fall finale of The Resident brought quite a few changes to Chastain Park Memorial, but none quite as stunning as Conrad Hawkins’ unceremonious firing.

During the episode, Conrad and Devon treated Tyler, a young man in need of a liver transplant after an acetaminophen overdose left the organ severely damaged. Unbeknownst to Tyler’s mother, he was attempting suicide when he took those pills — but there’s a rule in place at Chastain that prevents suicidal patients from getting a spot on the transplant list. Conrad and Devon agreed to lie about Tyler’s attempt on his life, insisting that his overdose was merely an accident. But at the end of the hour — after Tyler had already received his new liver, mind you — someone from the transplant team overheard Conrad talking to Tyler, and the words “take your own life” were crystal clear.

Conrad tried to proceed as if nothing had happened, and he argued that Chastain’s rule about suicidal patients is an arbitrary one. But in the finale’s last scene, just moments after Conrad had been named Chastain’s chief resident, he was fired by Red Rock Mountain Medical’s Logan Kim for violating Chastain’s transplant policy. Conrad knew the real reason for his dismissal, of course: Logan remains annoyed that Conrad blew the whistle on Red Rock’s harmful dialysis drug several weeks ago. But regardless, Conrad was forced to hand in his pager and white coat, and he walked out of the building.

Elsewhere in the episode, Red Rock’s insidious reign over the hospital extended to Dr. Bell, who was abruptly replaced as chief of surgery by — who else? — Dr. Cain. Meanwhile, Mina and AJ had a major disagreement in the operating room, as Mina questioned AJ’s care for her pregnant friend Adaku.

Below, executive producer Todd Harthan breaks down the eventful episode and teases, among other things, what’s next for Conrad in his seemingly “futile” battle with Red Rock.

TVLINE | You guys took some really big swings in this episode, particularly with Conrad’s storyline. When you were breaking this finale, did you debate in the writers’ room about how far to push the envelope?
We did. We actually debated it pretty early on, because at the jumping-off point of the season, you’re trying to figure out what target you want to hit. We wanted to have the audience feel satisfied but also deeply worried so they would come back to see what happens. [Laughs] We’d been mapping out a messy, big-swing finale since the early days of the season. When you get into the third season of a show and you’re fighting to stay on the air, fighting to keep your viewers at the edge of their seats, you have to take some risks. That’s where we’re living in the writers’ room. We’re certainly not playing it safe.

TVLINE | In the final shot of this episode, Conrad goes from looking very determined to looking very worried about what just happened to him. And he doesn’t have a great track record of coping with setbacks in healthy ways. Should we be concerned about him?
It’s new territory for him. Every time he’s had to fight and win a battle, he’s had some of his closest allies within arm’s reach. This time, initially, he does look like he’s determined, but when he steps outside the walls of Chastain, it dawns on him that he’s alone. What does this next battle look like? It’s unfamiliar, and that’s what we’re exploring on a deep level when we come back. How does our hero, who can seemingly fight and overcome all these other crazy obstacles, [deal with] this new one? That’s absolutely what we want to land in that moment — a deep concern for our hero. And when we do come back, we’re going to live in that space. Not just for the opening minutes, but for some episodes to come. We don’t want to rush through this part of Conrad’s struggle. We’re going to live in it and explore it and show his vulnerability. 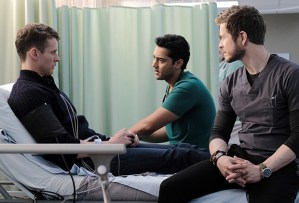 TVLINE | Would you describe Red Rock as unbeatable, though? At every turn, it seems like they can play any card they want to.
Absolutely. But that’s the reality. We’re not doing it just because it’s dramatic and frustrating on a TV show. That’s the honest approach. Money and power and influence can buy you all kinds of things — protection, the ability to cover up lies and corruption and everything in between. We’re not going to blow past that particular element in the story this season. We’re showing just how daunting of a battle this is going to be — not just for Conrad, but you’ll see it’s going to take a lot more than just him if they’re going to win this thing. So, absolutely. It seems like it is a futile battle to fight. [Laughs] And they’re certainly going to die on that hill. But we have a resilient group.

TVLINE | Devon also seemed to embrace more of Conrad’s moral ambiguity in this episode — the idea of doing something bad if it means serving a greater good. Will that gray area allow him to help Conrad as he fights Red Rock?
We’re going to put those kinds of decisions in front of him on multiple occasions, so the audience can start to see how he evolves. We think that’s the most interesting part of his journey this year. Is he going to really wake up and go, ‘Wow, I’m really becoming more like Conrad than I ever thought”? Or will he become some version of a hybrid? Or not? That’s the question we want people asking, not just in this episode, but moving forward. When we come back, now that he’s really trying to figure out what kind of doctor he wants to be, those are the kinds of things we’ll bring to the focus — his identity as a doctor. You’re going to get that in spades when we come back.

TVLINE | Tell me about what’s in store for Mina and AJ. This is the first time in a long time they’ve had significant friction. Will it change their relationship moving forward?
It’s going to be a bumpy road, no question. The exciting thing for us is [the friction]. If we don’t inject conflict like that — which, at times, feels like it’s going to change or fracture a relationship — it begs the question of, “How strong is this partnership? How much do these two people mean to each other?” Coming into the back half of the season, that’s a big one for Mina and Raptor. Someone [watching at home] might throw a shoe at the TV when we come back, but that’s OK! Because at some point, you might go pick it up and put it back on your foot. [Laughs] We want people to be mad at us, but also give them some relief, but then take it away again. That’s the job. For the two of them, they have such a crazy, rocky road when we come back. Their lives are being injected with all these other, different outside influences; that’s going to happen to both of them. I think the audience will be frustrated and nervous and excited — all the things we want them to feel.

Your turn! What did you think of The Resident‘s fall finale? Grade it in our poll below, then hit the comments with your full reviews!