“Coulson 2.0” & Co. are togged to the bricks for their visit to 1931, as seen in the first official photo from the seventh and final season of Marvel’s Agents of S.H.I.E.L.D.

TVLine’s thrilling #2020FirstLook series continues with an exclusive still photo from the ABC drama’s final season premiere (which was screened for a lucky few at D23 in August, and will hit everyone else’s screens in Summer 2020). In the photo, the new version of Coulson — who was fashioned using a blend of LMD and Chronicom tech — along with Daisy, Mack and Deke, have donned period-appropriate garb to carry out a mission in the year 1931. 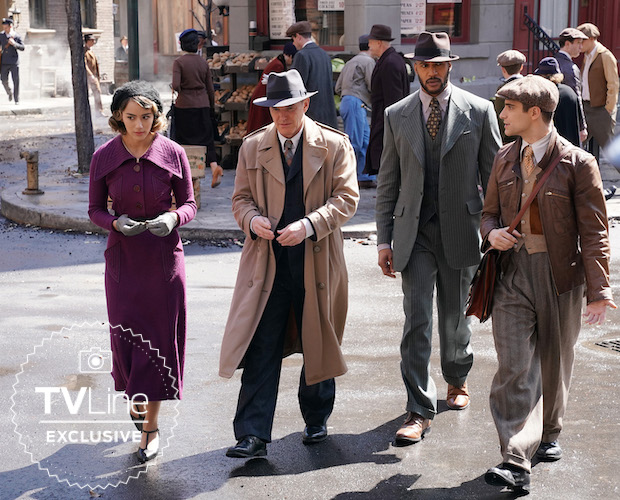 When last we tuned in, Daisy, May et al — after vanquishing Izel and Sarge aka Pachakutiq — were met by Jemma, who used a tricked-out Zephyr to time-jump everyone to safety just before Chronicom hunters obliterated the Mayan temple. But to where did a hidden, offsite Fitz send them? The question was actually, “To when,” as we saw the Zephyr approach a New York City where the Empire State Building is just finishing construction. Jemma then revealed that with the Chronicom hunters in possession of Nick Fury’s “black box,” they needed someone who truly knows S.H.I.E.L.D. So, through a merging of Chronicom tech and archival data, they created “the ultimate LMD” in the form of a suit-and-tie wearing Coulson.

In a previously released Season 7 promo (embedded below), a band of Chronicom hunters is seen storming an old-timey cop shop. We then cut to a series of quick clips, of “Coulson 2.0,” and Daisy warming up to him; a poolside murder; Enoch sprinting toward the Zephyr before it “jumps” away; a rocket launch from the seized Lighthouse; and a brief glimpse of a HYDRA logo.

Speaking with TVLine after the penultimate season finale, S.H.I.E.L.D. co-showrunner Jed Whedon said the team’s final, timey-wimey mission is “to preserve the history that we’ve grown to know and love on our show. It’s a way for us to look back at everything we’ve done and talk about the history of S.H.I.E.L.D. as we bring the show to its final chapter.” The cast, meanwhile, said in their final TVLine Comic-Con video Q&A that the series finale will be “beautiful, in a sad way.”