You might say that the competitor who came out on top of The Masked Singer‘s Season 2 finale outfoxed the competition.

The final installment (for now) of the fever dream of a singing competition saw the unmasking of its final three players: In addition to Fox, we found out who was wearing the Flamingo and Rottweiler costumes, as well.

Read on for a quick recap of their performances and to find out who was under the feathers and fur.

FOX | All of the evening’s performances were really enjoyable, starting with Fox’s rendition of Otis Redding’s “Try a Little Tenderness” that started slow, built strong and kicked into its highest gear during a rap break that invoked Jay-Z and Kanye West’s “Otis.” And that dancing? Perfection. (My guess: Let’s Make a Deal host Wayne Brady.)

FLAMINGO | Flamingo had so much fringe on her costume all season, it was only a matter of time before she tackled Tina Turner’s “Proud Mary.” Girlfriend killed it. What a strong way to finish a season full of great stuff from her, no? (My guess: The Real co-host Adrienne Bailon.) 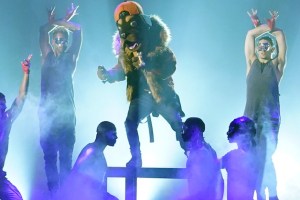 ROTTWEILER | The nice thing about this finale was that all of the remaining players were really deserving of winning the season, so I would’ve been fine with any of them in the top spot. That said, I kinda thought Rottweiler would take home the Golden Mask after his performance of Sia’s “Alive.” So good! (My guess: American Idol alum Chris Daughtry.)

Now it’s your turn. Are you happy Fox won? What did you think of the episode and the season? Weigh in via the polls below, then hit the comments with all of your finale thoughts!