It’s a good thing May is already seated in this photo, because her father is about to drop a bomb on her. TVLine has an exclusive first look at 9-1-1‘s spring return (exact date TBA), in which Michael shares the devastating news he first revealed in the Fox procedural’s fall finale.

Following a series of troubling incidents, including walking through a glass door and inexplicably waking up in his ex-wife’s bed, Michael was diagnosed with a brain tumor. At this point, Bobby is the only other person who knows about this grim discovery, but it looks like the rest of the family will be clued in very soon: 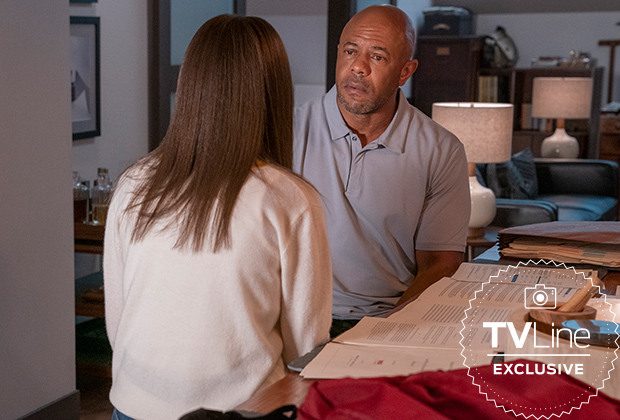 “Michael has become a real touchstone for us, a really great character, and Rockmond Dunbar is brilliant,” executive producer Tim Minear recently told TVLine. “When we got to ‘Rage’ this year, the scene where he sat his son down and gave him ‘the talk’ [about their traffic stop gone wrong] is when I knew I needed more Michael in my life. Unfortunately for my characters, when I need more of them in my life, it probably means bad things are going to happen to them.”

As for why Michael chose to tell Bobby before Athena or their children, Minear explained that they see each other as “two father figures, two men who have become friends. They have something in common, they love the same people. Bobby and Michael both love Athena, and Bobby loves their kids. There is something of value there.”

What are your hopes for 9-1-1‘s return in the new year? And how are you feeling about Season 3 so far? Drop a comment with your thoughts below.