9-1-1 wrapped its 2019 run on Monday with a series of life-changing developments for the 118’s nearest and dearest, including a last-minute twist that will have everyone talking until the show returns to Fox next year.

Let’s start with the good news: Bobby is fine! A series of tests confirmed that Athena’s new husband is in no danger from the hazardous fumes he inhaled last week. Her previous husband, on the other hand, is facing a terrifying new battle after receiving a very different diagnosis from his doctors. Though only Bobby knew the truth by the end of the hour, Michael discovered he has a brain tumor.

Elsewhere this week, Maddie returned to the scene of Doug’s demise, where she formally forgave herself and vowed to live her own life to the fullest; Christopher lamented Eddie’s inconvenient work schedule, but the two were eventually able to celebrate Christmas together at the firehouse; and an emotional encounter with a group of foster children inspired Hen and Karen to begin the adoption process.

Below, executive producer Tim Minear discusses the fall finale’s biggest twists, including what’s next for Michael. 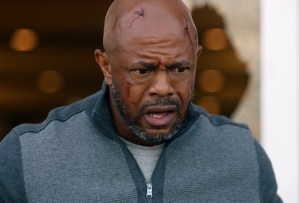 TVLINE | You couldn’t just let us have a happy ending, could you? Poor Michael.
Michael has become a real touchstone for us, a really great character. And Rockmond Dunbar is brilliant. When we got to “Rage” this year and we played the traffic stop gone wrong…ish, the scene where he sat his son down and gave him “the talk” is when I knew I needed more Michael in my life. Unfortunately for my characters, when I need more of them in my life, it probably means bad things are going to happen to them.

TVLINE | And sometimes it means we could be seeing less of them.
Well, now, don’t say that. Nothing’s been decided.

TVLINE | His relationship with Bobby is so interesting. Why have Michael give him the bad news first?
What you have there are two father figures, two men who have become friends. They have something in common, they love the same people. Bobby and Michael both love Athena, and Bobby loves their kids. There is something of value there. Michael is the one who couldn’t stay married because he was gay, so there’s no real acrimony there in terms of the divorce. So he loves that Athena and the kids have Bobby. He even said it in “Rage.” Something could have gone terribly wrong in that traffic stop, and he was glad to know Bobby was there for my family in case something happened to me. He said it there, and I think that’s what he’s saying at the end of this Christmas episode.

TVLINE | Not only has Michael become a more important character, but I’ve also enjoyed what we’ve been seeing from the kids.
I’m definitely finding ways to incorporate the kids into the show a little more. It was tough in the beginning, because Michael and the kids aren’t first responders. They’re appendages. They’re the family members of the people who do the jobs. It’s been a slow process, but also a natural evolution, to bring those characters more into the foreground to tell their own stories. For May, it started with the tsunami episode; I really wanted to give Corinne [Massiah] a showcase to show what a terrific actress she’s become. There will be more May and Harry moving forward.

TVLINE | And how much time will pass between now the and show’s return?
About the same amount of time we’ll be off the air, about three or four months. That’s what we did last year. We revealed that “Jason Bailey” was really Doug, and he was sitting outside Maddie’s house, looking at Chimney’s license. So Doug spent those four months befriending Chimney and getting close to him.

TVLINE | Speaking of Maddie, where would you say she is in the recovery process?
She has hit the milestone. She’s definitely at escape velocity, let’s put it that way.

TVLINE | Maddie handles the dramatic beats so well, but I’m a little torn, because I really only want the best for Jennifer Love Hewitt.
She’s definitely gone through a bit of a dark period. But now she’s seeing the sunlight, and we’re going to let her have some of that.

TVLINE | Switching gears to Hen and Karen, can I just say how glad I am that Tracie Thoms is on this show?
Me too. I worked with her on Wonderfalls many years ago, and I loved writing for her because she was so funny. I always wanted to work with her again, so this was a great way to get to do that. I cast her as Karen in Season 1, knowing that if I wanted to see Hen’s wife again, I’d have a fantastic actor to go back to. But she’s really become a part of the show.

TVLINE | Will we follow every step of their adoption journey, the same way we saw them do IVF?
You will see some steps of it, yes.

TVLINE | Generally speaking, what do we have to look forward to in 2020?
We’re going to have some great cases, big cases, episode-spanning cases. We’re doing an “Eddie Begins” episode, and although it won’t be exclusively a flashback, we’ll see how he earned his Silver Star in Afghanistan. We’ll understand the struggles he had with his wife, as well as how he came to be a single father. We think we know that story, but we’ll come to learn that it’s not as simple as we thought. We’re also going to see a little bit more of Josh, the 9-1-1 operator who works with Maddie. We’ll see a little bit of his personal life. We’ll see more harrowing rescues and perhaps a visit from some familiar faces.

Your thoughts on 9-1-1‘s fall finale? Hopes for what’s still to come in the new year? Grade this week’s episode below, then drop a comment with your full review.