Debate all you want whether or not Watchmen‘s Angela walked on water after Sunday’s season finale cut to black: The far more miraculous event would be for everyone involved in HBO’s intricate, expertly deployed superhero series to take their lead from showrunner Damon Lindelof and resist the pull of a potential Season 2.

At the moment, the premium cabler hasn’t renewed Watchmen — a curiosity given how much critical buzz and fan love the DC Comics-based series has generated for the network. And the ratings weren’t bad, either: On a weekly basis, the hourlong drama averages better ratings than many of the network’s other series, including Succession, Euphoria and the recently ended Silicon Valley. What’s more, Sunday night’s finale amassed a series high of 1.6 million viewers across all of HBO’s platforms.

So there’s almost no way HBO doesn’t want more Watchmen, right? But here’s the transdimensional-squid-sized rub: From the start, Lindelof has said that his take on the much-loved Watchmen universe likely would be self-contained and limited to nine episodes the way that the comics’ story was fully told in 12 issues; in interviews tied to the season finale, he reiterated that sentiment, stating that he currently has no ideas for future seasons of the show.

Of course the showrunner might come up with some genius idea next week. Or next month. Or next year. He certainly has the talent and track record to pull off another great season of TV. Or, if he’s serious about (as he’s said in interviews) stepping away and allowing someone to helm the show, HBO could find another executive producer to build on Lindelof’s rich vision. 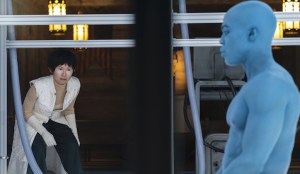 But I’d like to invoke the Jurrasic Park principle here: While everyone’s debating whether or not Watchmen could continue, they should probably stop to think about whether the series should continue. And Lindelof’s already given us his definitive answer: probably nope.

Watchmen is no Freaks and Geeks, Firefly or My So-Called Life, works of televisual art forced to live on in single-season infamy thanks to the myopic decisions of network bean counters. Instead, it is a fully realized love letter to Alan Moore, Dave Gibbons and John Higgins’ seminal work. It is a nine-part tour through a weird and wonderful world that just happens to feature some of the finest performances of the year. It is, in a word, transcendent.

And how do you follow transcendence? With a Season 2 that would be hard-pressed to live up to Season 1’s achievements? With episodes that likely would struggle to tell as meaningful and timely a tale as how hate flows down through generations, poisoning everything in its flood zones?

Better to let Watchmen exist as a singular season that is so layered (the music! the Easter eggs! the literal eggs!), it’ll stand up to a re-watch anytime you find yourself longing for a return to Tulsa.

Phoebe Waller-Bridge had the right idea when she decided to put a hard stop to Fleabag at the point she felt it was the best move for the work — even though that meant a scant two seasons. Lindelof is telling us all that he thinks he’s at a similar place with Doctor Manhattan & Co., and this fan of what he’s created doesn’t need any more than that.