THE PERFORMANCE | As scintillating as it was to see Spencer, in earlier episodes, play “Doris” as a cool ‘n’ crafty femme fatale, it was her work in the season finale that most affected us — as well as had us on the edge of our seat.

Entering that final hour, you felt the walls closing in on Katherine Harlow, whose long-game scheme “to hurt some people, a few who I once loved very much” (as she told Molly) started to show its cracks and then crumble. The beginning of Katherine’s possible end came via a call from Witt’s phone, though it was not her wingman on the other end. As the unexpected but familiar voice hit Katherine’s ears, Spencer’s bright eyes dimmed and she nervously grinded her teeth, to a degree that you could practically feel her heart palpitating with anxiety.

That tension within Katherine hit a new level when Matty and Johnson demanded that she turn over Ethan aka the third River Phoenix. “Burt knows,” she insisted to her inside man at the Bang-a-Rang. “You can go home. You need to go home.” Ethan’s allegiance, alas, was hers no more, and Katherine could only sit and watch as he rejoined those who might very well be given cause to end him.

Spencer’s grand finale took place where Katherine’s story began, at the house that had so much meaning for her and her brother. First, though, she was met by Queenie, who sighed, “I told you never to come back” — to which Katherine shot back, “Did you ever believe I wouldn’t?” Queenie was disappointed to see the OG Pin-Up return home, and with such an agenda. And Katherine seemed a bit sad to disappoint her. But there was business to be done in the barn nearby. And once that was tended to, Katherine returned to the porch, exhaled, cocked her hip, reclaimed her gun and bid Queen adieu. But not before noting, “Oh — it’s wonderful to be home.” Just as “Doris” and her journey was wonderful to watch. 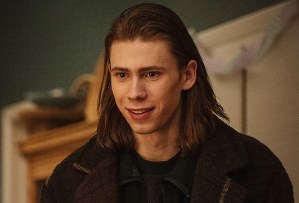 HONORABLE MENTION | Mrs. Fletcher may have been the focus of HBO’s latest limited series, but we could hardly take our eyes off her teenage love interest Julian, played with aching sensitivity by Owen Teague. The young actor was astonishing in Sunday’s finale, conveying Julian’s longing and regret without saying much at all; it was in the furtive glances he stole at Eve from across her living room, or in the tender smile with which he said goodbye to her that night, or in the sheepish eye contact he shared with Brendan moments later. But our favorite scene came during Eve’s party, as Julian revealed he’d made a new female friend at work. “She’s not my type. But she’s cute,” the teen shared — and as Julian seemed to mourn the end of his fling with Eve, Teague managed to roll all five stages of grief into one simple line reading.

HONORABLE MENTION | Richard’s slow, agonizing realization that his big tech breakthrough was literally too good to be true yielded a heartbreakingly nuanced performance from Thomas Middleditch in Silicon Valley‘s series finale. Upon receiving confirmation from his top engineer Gilfoyle that they had indeed created multi-billion dollar monster that must now be euthanized, Richard’s brain short-circuited, and Middleditch perfectly captured his alter ego’s anger/denial/bitterness. “I’m sorry, you want to kill it?” Pied Piper’s fearless leader stammered as the veins in the actor’s neck protruded and his hands flew far and wide. “Now? <i>Now</i>? We are inches away from the finish line. You want to f—king kill it? It just needs a little help. We just got to fix it.” Richard concluded his meltdown by shooting the messenger, ordering Gilfoyle to “kill yourself,” before trudging away, Middleditch suffusing his character’s gait with utter resignation. 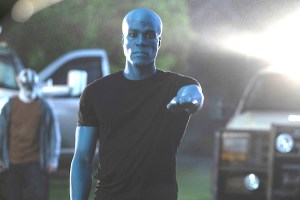 HONORABLE MENTION | Watchmen‘s Cal Abar may not have a superpower, but his portrayer Yahya Abdul-Mateen II certainly does: It’s the ability to make an all-powerful, almost-omniscient, totally blue creature into the most relatable of characters. Though we’ve loved the actor’s presence as Angela’s reliable husband all season, we were blown nearly to Europa Sunday by the preternatural calm he brought to the comic’s best-known character: Jon Osterman, aka Doctor Manhattan. He wasted no movement. He spoke simply, with such restraint. He imbued all of Manhattan’s gestures and facial expressions with a gentle weariness borne of the knowledge that tragedy is inevitable, yet we all must carry on with life and love regardless. In short, the hour was a dazzling showcase of Abdul-Mateen II’s considerable talents.