It’s the bottom of the ninth for Brockmire. The underrated Hank Azaria comedy — one of TVLine’s Peak TV Treasures — will end with its previously announced fourth season, TVLine has learned.

“I really loved this season in several very right and a few very wrong ways,” Azaria said in a statement. “I hope you will, too.”

The cabler also released a (very funny) statement from Azaria’s alter ego, which reads as follows:

“Making this show has been one of the top seven joys of my life. Others include: that time by the swings with this guy Phil; my visit to the belt factory; my childhood days on the carrot farm; every time I finish a pancake challenge; that moment when you pass a porta potty and it really stinks then finally you get far enough away from it where you don’t smell it anymore and just normal air seems like sweet, sweet perfume to you.”

The decision to end Brockmire was mutually agreed upon by showrunner Joel Church-Cooper and Azaria, who is also an executive producer. Last May, Cooper divulged to TVLine why he felt it was time to bring the series to a close, and what fans can expect from the final eight episodes in 2020.

TVLINE | Why is now the right time to end Brockmire?
Ultimately, four seasons and 32 episodes of this show feels like the right amount. As proud as I am of the ambition of this show and the fact that we constantly burn the boats behind [us every season and start over], that also means that this show is not built for a long run. We only do A-stories, and it’s not really an ensemble… All of those creative decisions just means that you’re burning through story and you don’t have the option to do 100 episodes.

TVLINE | Had the network come to you and said they wanted a fifth season, would that have been doable?
Honestly, it’s so hard on Hank. We’re a low-budget show and we block shoot. That means that there’s four or five scenes in a day and he has to memorize everything before we get to set — and he has to be off book on eight episodes before we get to set. That’s so much memorization… so much work. His back always gives out from stress. He’s in fantastic shape. You will never meet a 50-year-old man in better shape than him, but still it’s so physically taxing and he’ll be the first to admit it. He’s not in his early 20s anymore. I don’t know of another actor who could shoulder this kind of load and four seasons of it seems to be asking plenty of him. Asking him to do five, I think would have started to seem cruel.

TVLINE | The show has completely reset itself every year. What’s the plan for Season 4?
We’re actually making the biggest leap yet into a new world. We’re jumping 10 years into the future of Jim’s life and all the other character’s lives. Amanda Peet [is back for] five episodes, so it’s really a return to the Jules and Jim dynamic, but it’s different because both people have changed and been without each other for a long time… Charles is back, Jules is back and there’s a circular nature to the storytelling of Season 1 to Season 4 that I feel will make you feel like you watched a full story.

TVLINE | Is Jim still calling games for Oakland?
He has a new job… All I’ll say is that he’s in a position of high authority. America has gone 10 years down the Art Newlie path and we explore that. It’s a really fun kind of dystopia that Brockmire is trying to endure.

Brockmire‘s fourth and final season is set to premiere in March. Scroll down for a first look photo, then hit the comments with your reactions. 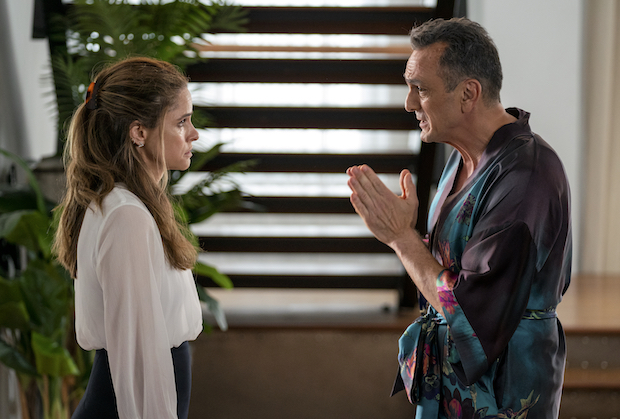