In Wednesday’s Brockmire finale, Jim and Gabby finally got a chance to call their first regular-season MLB game, only to be confronted by unexpected protestors at the hands of bigot Art Newlie. Just about everything that could possibly go wrong went wrong, but Jim managed to come out the other side without throwing away his sobriety.

Below, showrunner Joel Church-Cooper reflects on the evolution of Brockmire and its title character, the significance of Jim’s relationships with Gabby and Matt the Bat, and Season 3’s “emotional crescendo.”

TVLINE | This year’s arc really started at the end of last season, when Jim decided to clean up his act. Heading into Season 3, did you have any concerns that this new and somewhat improved Jim would alter the DNA of the show?
No… This show is about a man who gets better, as a country gets worse… If that’s our thesis, a part of that has to be him reckoning with his own demons in some way and becoming sober.

TVLINE | Was it always the plan to strip Jim of his vices?
A lot of things that I liked and found funny were not necessarily the drug [and alcohol] humor, which to me was a crutch that I could lean on to get laughs. Eventually it was going to get old, and before it got there, I wanted to change it.

TVLINE | So there was never a version of the finale where Jim took that drink?
That’s normally where the sobriety storyline goes, [and] I didn’t want to do that. That would have been the predictable route, to try to wring drama out of “Is he or isn’t he going to go back?,” and I just wasn’t interested in that.

TVLINE | What was your overall goal with the Season 3 reset?
I didn’t want to do an addictions storyline like I had necessarily seen before. If you noticed, we really only spent a total of five, six minutes in rehab. It’s so much more about the personal accountability that comes after that. This show is sort of trying to mirror the current turmoil and darkness in our country. It’s the idea that, at this point in time, Brockmire has decided to become a moral person… He’s going against the grain in trying to better himself as a middle-aged, straight, white man, as his generation is probably just getting more entrenched, more racist, more homophobic. He’s trying to go the opposite way.

TVLINE | Is that why Art Newlie and his disciples played such a big role in the finale?
Brockmire takes place in a post-peak America… For our show, the idea was that Art Newlie was exposed publicly as a racist and a sex fiend, and he now has a YouTube show and he’s more popular than ever — an older white man pitching Americana. That message resonates with a lot of people in this country, and Brockmire inadvertently gives him a larger platform; he creates a monster by calling out a monster.
Like anybody else, I’m affected by what goes on in the world, but it also felt in keeping with what the world of the show has been, which is, by the very nature of Brockmire leaving America for 10 years and coming back, he’s always had fresh eyes to this country. He’s always had a [wider] perspective than you would expect for a man of his age in a workplace comedy about America’s pastime. It gives us access to cast a critical eye… You don’t want it to be heavy handed. You want it to seem organic, and hopefully it does.

TVLINE | Which brings us to the speech that Jim gives at the start of his first regular season broadcast…
That’s the ultimate sign of Brockmire’s growth. He’s able to speak to the country and make a moral decision. It’s not about his own self interests, it’s… in service to others. He’s going to show people the kind of person you can be if you really look inward. I don’t think we suggest that that’s going to change anything. It’s a very dark world in which most positive actions are considered futile. That doesn’t mean it shouldn’t be done… It’s about why you do them and who that makes you rather than, “Hopefully this will be the thing that saves us.”

TVLINE | We didn’t see much of Charles or Jules this season. Was that by design?
The relationships that changed Jim and put him on this path are the Charles and Jules relationships. This entire journey of finding his moral center is really to be worthy of the two of them. Now he’s trying to build this new relationship [with Gabby], but he’s also bound by mistakes of the past. 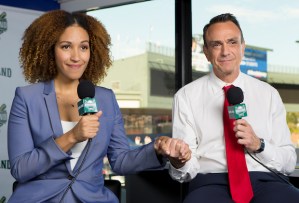 TVLINE | It seems to me that nothing has been more important to his sobriety than his working relationship, and later friendship, with Gabby.
Yes, that was on purpose… In this new relationship, Brockmire doesn’t get the four or five mulligans that he got with Charles and Jules, like, “Oh sorry, I f–ked up.” Now his behavior has to be held accountable. I said in the casting of it and in the writing of it, that this season’s going to make or break on the casting of Gabby, and I’m really happy that we found Tawny Newsome. You really felt the growth of that relationship episode to episode, and I think you felt that he earned her friendship, by Episode 6 especially. You see the growth in the ways in which he goes above and beyond for her.
I also wanted Gabby to be an important character who had her own journey, who had her own agency… I wanted to put a queer woman of color in the center of baseball. There’s nothing inherently exclusionary about the game of baseball, other than the culture around the game of baseball.

TVLINE | The other meaningful relationship that Jim developed this season was with Matt the Bat, played by the ubiquitous J.K. Simmons. My favorite scene of the season, perhaps of the entire series, was in Episode 7 — that last conversation between Jim and Matt about what happens after we die. Can you talk to me a bit about writing that scene, and its translation to the screen?
We were building up to it in a large way. When I decided on the recovery arc, me and Hank [Azaria] would talk about Alcoholics Anonymous and what the program means to him, and it just sort of hit me: What we need to do is to talk about this higher power. Because Brockmire’s an atheist, his higher power [would] be baseball, and that naturally dovetailed with the Matt story. 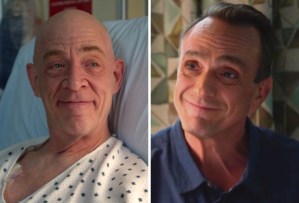 TVLINE | What were you hoping to do with that character?
I wanted to tell a story that took a relationship built on toxic masculinity, with two men literally in a d–k-swinging contest, and I wanted to take them to such a real emotional and vulnerable place, where they’re talking about things that they’ve never told anybody else. That’s why in that scene, it’s purposeful that Matt admits that having that size d–k has caused him nothing but grief, and the only people that are impressed by it are men.

TVLINE | Of course, it goes way beyond that…
There’s almost three acts in that scene. There’s the initial comedy, then there’s this moment of vulnerability, then there’s the discovery of a religion. The writer of the script, Andrew Guest, he’s a friend of mine. He doesn’t really know baseball, so we collaborated on [the scene] and sort of expanded it… We wrote [the part] for J.K. Simmons, but he wasn’t cast yet, so we tried to lure him in with great writing and a great character… It’s the emotional crescendo of the season. We thought it worked on the page, and then [we did] the first take, and it’s so much better when you have two great actors. We cross-shot it so there was coverage on both of them, so they were never off camera. Both of them were constantly giving their all every single take, reacting in the moment to the things the other actor was doing. They were really going for broke. Hank walked off set and said, “That’s one of the best five scenes I think I’ll every do in my life.”

What did you think of the Brockmire finale (and Season 3 overall)? Weigh in via the following polls, then hit the comments with your reactions.