Brockmire wraps its sophomore run with an episode that signals a new beginning for the depraved play-by-play announcer — but not before he hits rock bottom.

We pick up right where things left off, with the titular addict on a bender with his new friend (Claws‘ Carrie Preston), whose name is never revealed. They’re guzzling Scotch, smoking crack and getting into bar fights. At one point, Jim steals a walking stick from a blind man, then has sex in a movie theater attended by young children.

Later, the debaucherous duo return to her mansion. She tells Jim that she has something special in the bedroom, then returns with a loaded gun. She convinces him that he’s ready to end his life, then gets the ball rolling on Russian roulette. She holds the gun to her temple and pulls the trigger. Blood splatters everywhere, and she looks as good as dead, but the bullet’s only grazed her scalp. A petrified Jim takes the gun and finds that the barrel is fully loaded. 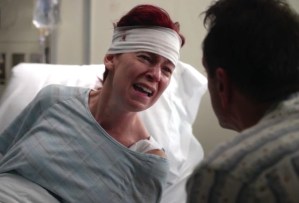 Jim rushes his enabler to the hospital. She wakes up to find that she’s been restrained to her bed and placed on a 24-hour suicide watch. She asks why Jim’s still there, and he says that he had to know whether she feels relief or regret having ultimately survived the attempt on her life. She tells him that he doesn’t deserve to know, having “p—y’d out” of “the game.” She mocks him for thinking his pain is comparable to what she’s been through, then tells him to “get the f—k out.” (Helluva performance by Preston!)

Jim steps outside her room. He’s approached by a man who thanks him for rushing the unnamed woman to the hospital. He then reveals that she was once a high-powered CEO with five failed suicide attempts behind her. It’s at this point that Jim starts tripping, having popped a bunch of “mystery pills” back at the house. The man walks away in disgust, and Jim realizes that it’s time to seek professional help. 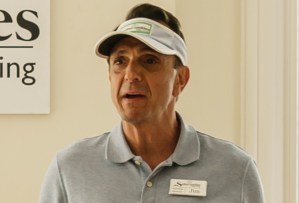 A year later, Jim is now in sober living, having completed a 12-step program at Sobertunities. He receives a surprise visit from Charles, who tells him that the Oakland Athletics want to bring him on as their fill-in announcer. Jim is shocked that he keeps getting chance after chance, but Charles is not. “White privilege,” the former assistant cracks. Jim isn’t convinced he’ll be able to maintain his sobriety in the real world — until he learns he’ll have someone to help him get settled. No, not Charles, who’s decided to stay in New Orleans, but Jules! Jim turns around to find the love of his life standing there with a huge grin. She tells him that the Frackers recently won the pennant, and she’s been doing consulting work for the Yankees’ Triple-A team.

Afterwards, Jim gives Jules a tour of the facility. In his bedroom, she asks, “You went through all 12 steps… why didn’t I ever get my amends?” And that’s when he sits her down and apologizes for ever walking away from her. “In a life so full of regrets, you’ll always be my biggest one,” he says. It’s a moment so perfect, it almost — almost! — makes up for the lack of Amanda Peet this season. He then tells her that he’s supposed to back up his words with, um, “positive actions,” but Jules insists that he stay focused on his sobriety for now. 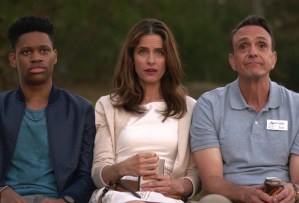 Later that day, Jim, Jules and Charles make small talk on a bench down by the lake. Jules asks what finally convinced Jim to get clean. He doesn’t get into detail about the events depicted earlier in the episode, but instead tells them that he didn’t want to cause his loved ones any more pain. Then, as the season draws to a close, the three of them watch the sun set — and quickly grow bored.

What did you think of the Brockmire finale? Grade the episode — and Season 2 overall — then drop your thoughts in a comment below.