Per host Nick Cannon, Wednesday night’s TV line-up offered up “The Christmas gift we’ve all been waiting for.” Ooh, a Peloton bike? You shouldn’t have, Nick! “The semifinals of The Masked Singer.” Oh. That’s good, too.

In its second installment this week, Fox’s maniacal music competition booted not one but two of its incognito competitors. That leaves just three players left for next week’s finals. But who will those players be? Let’s review the performances!

FOX | Fox’s choice to perform Donny Hathaway’s “This Christmas” is making me want to link to that Patti LaBelle tree-lighting clip again. But I will resist. His version was very smooth, and the visual of the ballerina in the snow globe was a nice touch. “You slayed like Rudolph!” judge Jenny McCarthy cried after his number, and while I have no idea what that means, I espouse the enthusiasm with which it was uttered. (My guess: Whose Line Is It Anyway?‘s Wayne Brady. And oops, guess I couldn’t resist after all.) 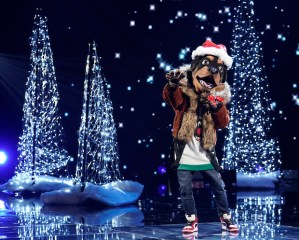 ROTTWEILER | I assumed all of the performers would choose holiday songs for their selections this week, but the big dog blew that to pieces when he did a stripped-down version of The Killers’ “Mr. Brightside.” After their songs this week, each singer gave the judges’ panel the “gift” of a clue: Rottweiler’s gift was a drawing of him with all of them, which… thanks? (My guess: American Idol alum Chris Daughtry.)

THINGAMAJIG | Who’s got the Christmas spirit? Thingamajig, that’s who! The green guy crooned Bing Crosby’s “Winter Wonderland” after a set-up package that referenced his “tough year with a lot of obstacles and adversity” and featured someone wearing a knee brace; the song choice didn’t exactly scream “I have overcome!,” but we’ll allow it. (My guess: Indiana Pacers player Victor Oladipo.) 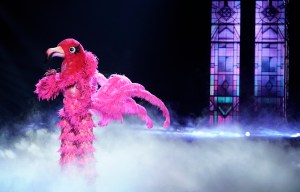 FLAMINGO | I’ll admit: I didn’t think Pinky had the gravitas to pull off Jeff Buckley’s “Hallelujah.” But when that smoke machine started pumping and she cranked out the minor fall and the major lift? I was on board. Her clues included a cheetah-print suitcase and this mysterious statement: “I was baptized in Israel.” (My guess: The Real co-host Adrienne Bailon.)

LEOPARD | Throughout Leopard’s entire performance of “Hey Big Spender” from Sweet Charity, all I wanted was Sam Rockwell as Bob Fosse, standing on the side of the stage and critiquing the cat’s every slinky move. In lieu of that impossible order, the cheeky version we got was pretty great. (My guess: Seal.)

Now it’s your turn. What did you think about the semifinals? Hit the comments with your predictions on who’ll take it all!