Warning: The following contains major spoilers for Monday’s “Crisis on Infinite Earths.” Proceed at your own risk!

“Crisis on Infinite Earths” traveled to Smallville during Part 2 of the Arrowverse crossover, revealing an unexpected turn of events for Tom Welling’s Clark Kent and Erica Durance’s Lois Lane.

Tasked by The Monitor with locating the Paragon of Truth, aka a Kryptonian who has suffered a great loss, Iris and Earth-38’s Clark and Lois traveled the multiverse in search of their Superman. They arrived at the Kent farm on Earth-167 to find Welling’s Clark chopping wood. But before the trio could fully explain what was going on, they were banished by Earth-38’s Lex Luthor, who was out to kill all the Supermen in the multiverse. However, his plan was thwarted when his kryptonite did nothing to harm Clark… because Clark gave up his powers for his family! Happily married to Lois with young daughters, he remarked, “That’s worth more than any superpowers.” With this Clark no longer a threat, Lex retreated — after getting punched by the powerless superhero, who remarked, “Still stronger.”

So how did Welling feel about the surprising fate of his character? “Honestly, he was terrific,” crossover showrunner Marc Guggenheim said at a recent press screening. After reading the script, Welling responded, “‘I love this.’ He basically said to me, ‘You guys have basically written the one scene that I can’t say no to,’ which was really, really nice… I feel like every note, even Tom’s little facial expression when he says, ‘Oh, still stronger,’ is great.”

And checking in with Clark on the Kent farm versus another location just felt organic for the fella dubbed “Smallville” by his wife. “We knew that we really wanted Brandon Routh to be Clark Kent in The Daily Planet,” Batwoman showrunner Caroline Dries shared. “I think the Tom Welling Clark Kent that we all picture when we think of him is Clark on the farm. So it made sense that the farm is still there, and Tom was joking when he was there, ‘Oh, that cow recognized me.’ It all felt very 10 years ago in a great way.”

Elsewhere in Part 2 of the crossover, the superheroes were grappling with Oliver’s death, with Mia and Barry intent on resurrecting the archer via a Lazarus pit, despite Sara’s warnings about its aftereffects. With Constantine’s help, they located an Earth on which the Lazarus pits still exist and submerged their friend.

Deciding to use the pits to bring back Oliver made sense, because even though they’ve been destroyed on Earth-1, “we have been bringing [them] back a little bit this season” with Roy’s arc, Arrow showrunner Beth Schwartz explained. Plus, “it’s not just an easy transformation that you go in the pit and then you’re back. We all know what happens to people when they go in.”

Speaking of the consequences, Sara, who has firsthand experience with the pits, was right to be concerned about Mia and Barry’s plan. After a wild Oliver emerged from the pit, Constantine was unable to bring back his soul, having lost his magical mojo due to the spreading antimatter.

“The thing that, certainly, Sara’s wrestling with the most is she went into this whole Lazarus pit idea with Mia and Barry with a lot of reservations, and they’re reservations…that are very, very well-earned,” Guggenheim noted. “The complication that you saw at the end of Hour 2 is just another confirmation that she should have maybe trusted her original instincts that things are not working out quite the way Barry and Mia had hoped.” 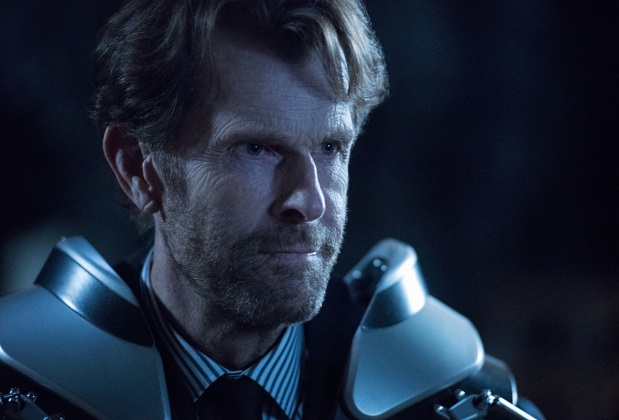 Meanwhile, Kate and Kara went to Gotham City on Earth-99 to find the Paragon of Courage, aka the Bat of the Future. They believed him to be Bruce Wayne, but that world’s Batman (played by Kevin Conroy) turned out to be an old man warped by all the lives he had taken (including Superman’s!). When he attacked Kara, Kate sent Bruce flying, inadvertently electrocuting the metal suit holding together his weathered and battered body.

“He was being vicious, and she was being defensive of Kara to protect Kara,” Dries said of Kate’s actions. “I don’t think of [killing him] as an active goal of hers, so she’s not going to have the weight of that on her shoulders. It’s more so she just looked at her future in the mirror and is like, ‘Is this who I’m going to become?’ That’s why it’s so important that she’s establishing this relationship with Kara, who can talk her off the ledge and say, ‘No, that’s not who you are.'” As for that kryptonite Kate took back to Earth-1, it leads to an “internal conflict” for Batwoman in Part 3 (airing Tuesday), Dries teased.

What did you think of “Crisis of Infinite Earths” Part 2 and its Smallville twist? Grade it below, then hit the comments!