Warning: The following contains major spoilers for Sunday’s “Crisis on Infinite Earths.” Proceed at your own risk!

The Arrowverse’s biggest crossover event, “Crisis on Infinite Earths,” kicked off with an extremely bold, episode-ending twist on Sunday’s Supergirl: the death of Oliver Queen, aka the Green Arrow!

To stop the wave of anti-matter hurtling toward Earth-38 (and the rest of the multiverse), Oliver and his superfriends were tasked with protecting quantum towers, which were placed by The Monitor on key Earths, from an army of shadow demons. But when the threat became too overwhelming, forcing The Monitor to scoop up the heroes, Oliver refused to retreat until the planet — which was ultimately destroyed — was evacuated. He kept fighting until he ran out of arrows, leaving him defenseless against the creatures, who critically wounded him. Barely able to talk upon being delivered to Earth-One’s Star City bunker, a dying Oliver tearfully told daughter Mia to tell his son William and his wife Felicity how much he loves them. Then he took his final breath.

Prior to his death, Oliver — plus, Earth-16’s Oliver in 2046 — also shared some significant final scenes with Sara “to remind the audience how far they go back, and how embedded her history is with his, and how important he is to her in her life and where she’s ended up,” Legends of Tomorrow showrunner Keto Shimizu said at a recent press screening. The interactions also allowed “her to see the person he’s become, to really acknowledge that,” Arrow showrunner Beth Schwartz added. In fact, after guilt-torn Earth-16 Oliver apologized for bringing her on the Queen’s Gambit, Sara reassured him that he’s a good man on every Earth. 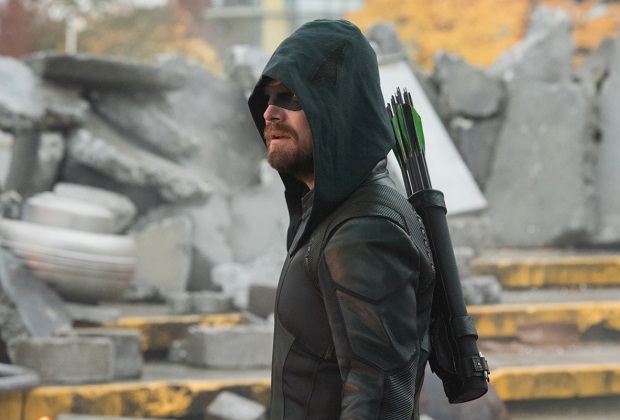 In the end, Oliver’s heroic actions saved many additional people from Earth-38, giving them enough time to get on a spaceship to Earth-One, The Monitor noted — but it was not the ending he foresaw for the archer. Similarly, while viewers have been told (via The Monitor) for a while now that Oliver Queen will die, his death was not without surprise.

The decision to have Oliver’s life cut short so soon into the crossover “really came off of ‘Elseworlds,’ which strongly suggested that Oliver was going to die, and then the Arrow Season 7 finale, where we told the audience Oliver is going to die in ‘Crisis,'” crossover showrunner Marc Guggenheim explained. “So the dilemma that we presented to our own selves was that we spoiled our own story. So if Oliver dying isn’t the surprise, what is the surprise?”

The answer: “The timing of him dying, because we figured the audience is expecting that Oliver would die in the climax in the fifth hour,” Guggenheim continued. “So if we went in the exact opposite direction and killed him off at the end of Hour 1, we accomplish two things: Hopefully, we do surprise the audience — that’s absolutely the intention — but we also really establish the stakes, that going into the next four hours, ‘Wow, if Oliver Queen can die, then no one is safe.'” 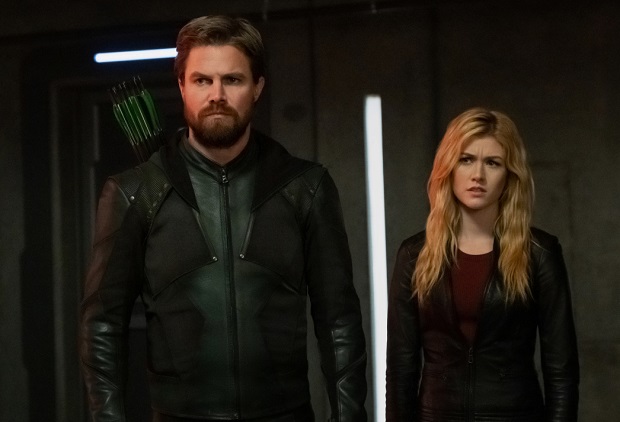 As for how the other characters will deal with the loss of their friend when the crossover continues on Monday, they “all have a different take on how to grieve or handle Oliver’s death,” Batwoman showrunner Caroline Dries previewed. “Some of them believe it’s over. Some of them believe we can fix this. Some of them are not wanting to even think about it.” Added Shimizu: “It sets up really interesting stories and conflicts between all these characters… who have different ways of reacting to this tragedy, and you get to see them all grieve together in a really compelling way.”

Meanwhile, Kara has been hit with a double whammy. “In addition to Oliver, she’s grieving the loss of her Earth,” Supergirl showrunner Robert Rovner noted. “So she comes into it wanting to try and figure out how to fix what’s happened, and that is her journey, very much with Kate [Kane], not only in the Batwoman hour, but in the rest of the crossover.”

What did you think of “Crisis of Infinite Earths” Part 1 and its deadly ending? Grade it below, then hit the comments!