Did your invite to Stevie and Dmitri’s wedding get lost in the mail? Have no fear: We’ve gathered all of the highlights of Madam Secretary‘s series finale — which included the nuptials of the First Daughter and her soulmate — in a final (sniff!) recap.

The episode, “Leaving the Station,” takes place nine months after the events of the previous installment, and we pick up two days before Stevie’s wedding. She and Dmitri are planning to hold it at a gorgeously bucolic venue. They’re particularly taken with the site’s hand-hewn wooden beams and such… which will play a big part in what happens later.

Elizabeth is riding high after the failed impeachment and the groundswell of support for her presidency, so she announces that she’s going to revive the Equal Rights Amendment initiative in an effort to get the Constitutional change ratified by all 50 states. (It doesn’t hurt that a woman born on the day women were given the right to vote — who’s in the Oval Office, along with members of the U.S. Women’s National Soccer Team — gives Elizabeth grief about introducing a mere Equal Pay and Family Leave bill the Constitution doesn’t specifically guarantee women’s equality. Also: How to Get Away With Murder‘s Cicely Tyson plays the old woman, and she is awesome.)

One of Elizabeth’s biggest opponents on the Equal Rights Amendment front is Ohio Sen. Amy Ross (guest star Tyne Daly, Cagney & Lacey star/sister of Tim), who thinks that men and women are different and that’s just how it is. The Daly siblings get a nice scene together while Amy is waiting to talk to the president, but we can’t focus too much on that, because Stevie’s wedding venue just burned to the ground!

Everyone, especially Russell, scrambles to set the big event up somewhere else. But given the constraints of Elizabeth’s security protocol, they’re basically limited to either Camp David or 1600 Pennsylvania Avenue. In the end, it’s decided: Stevie’s going to have a White House wedding! 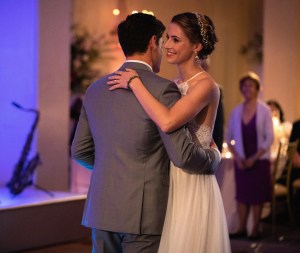 Elizabeth and Henry are adamant that the event not turn into a political shindig, despite Mike’s insistence that they use it to their advantage. But Stevie and Dmitri are on board. And eventually, a bunch of lawmakers and at least one foreign dignitary are in attendance. Russell’s wife, Carol, also is there — but they’re seated separately, given that she’s told him that his job has come first too many times, and she’s leaving him.

President Dalton performs the ceremony, in which Dmitri and Stevie each recite vows they’ve composed. It’s simple, sweet and lovely, and Stevie’s dress is divine. Jason and Allison are there, of course. So are Daisy (who’s been exonerated but isn’t working); Matt (who’s writing TV shows in Los Angeles now); Blake (who performs several musical numbers during the reception) and his fiance; and Jay (who’s still with the chess player — who is pregnant! — and who’s moving back to D.C.). Also of note: Matt tells Daisy he misses her and that she should move to L.A., so… 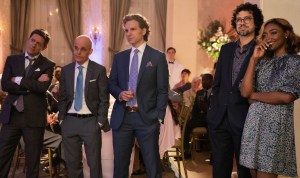 Other highlights of the reception: Henry gives a toast that makes multiple mention of Thomas Aquinas, Peter Frampton plays “Show Me the Way” for the first dance and Russell and his wife reunite after he promises to put her before his work from now on — and proves it by writing his resignation letter on a cocktail napkin and handing it to Elizabeth during the dinner portion of the evening.

A month later, Jay is Elizabeth’s new chief of staff, and he enters the Oval to tell her that the ERA is going to pass in both the House of Representatives and the Senate, but polling indicates that the possibility of 50-state ratification is weak. So she gleefully proposes a whistle-stop tour to drum up support across the country. And the last shot of the entire series is her wrapping one of those stops and kissing Henry as a crowd cheers and the train they’re on pulls out of a station.

Now it’s your turn. Grade the series finale of Madam Secretary via the poll below, then hit the comments with your additional thoughts!