So yes, in a minute we’ll get to the fact that Dublin Murders‘ Cassie is about to go on one of the most dangerous undercover missions of her career. But when TVLine got series star Sarah Greene on the phone from London ahead of this Sunday’s episode (8/7c), there was a very pressing matter related to the previous installment that needed to be dealt with first. (Luckily for us, Greene was a good sport.)

TVLINE | I know Cassie has a huge undercover operation about to begin, but we need to talk about Cassie and Rob first. Because come on.
[Laughs]

TVLINE | The last episode, we saw that they slept together. She knows him really well; do you think she was surprised by how harshly he rejected her?
Oh, absolutely. It’s quite shocking. For anyone to react like that or treat their friend like that is quite shocking. He says the one thing that he knows can really, really hurt her: “You can just tell yourself Lexie did it.” She feels like everything is falling apart. She’s ruined things with Sam… What else to do except run back to her one constant, which is Lexie? 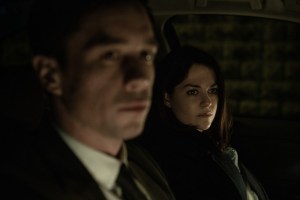 TVLINE | Obviously, that played a huge part in her decision.
Of course. I mean, I don’t think it’s like she had a fight with her boyfriend and ends up becoming really self-destructive. I think she was on that path anyway. The doppelganger turning up, as well: She needs to find out who this person is. In the heat of the moment, you do think that it has to do with Rob. But actually, as the episode continues, she’s figuring out who this person is, where she came from, why she appeared and why she stole her identity.

TVLINE | As we head into Episode 5, give us a sense of what Cassie’s preparation to be Lexie looks like.
It’s Frank and Cassie doing what they do best, which is going undercover. I think their relationship is amazing… They just get a real kick out of it. It’s studying these people. It’s figuring out the other students in the house, who are they and what their pasts are, their backgrounds are. And watch as much footage of Lexie as they can. And then the transformation, the look happens as well. It’s a fun episode. I think you’ll enjoy it.

TVLINE | You mentioned that Cassie is already not on a great path, and now she’s had these big upsets. Going undercover, and how it plays with your psyche, can be dangerous in general.
Absolutely.

TVLINE | Is she aware that she’s a bit more fragile than she might be normally?
Oh no, I think they’re spiraling out of control — herself and Rob — separately. Their pasts are starting to catch up with them, and she’s in a really needy, really precarious position with her mental health. She’s completely reckless with herself and everybody else and is not really thinking straight. It’s not a good move, what she’s about to enter. And because she’s distracted, that doesn’t help matters at all. Also: She’s going undercover to find out who murdered someone who looks just like her. One wrong move, one slip-up, and she’s brown bread, as we say in Ireland. [Laughs] Really dead.

TVLINE | Are Cassie and Rob in contact while she’s undercover at all? How do the next few episodes go for the two of them?
No, she has no contact with the outside world. You’re going to see two people go to hell and maybe come back from it, maybe not… For Rob, especially. His is really sad.