Fox’s The Moodys premiered Wednesday, kicking off a three-night event that’ll continue Monday at 9/8c. In a moment, we’ll want to know what you thought of the dramedy (which is based on Australia’s A Moody Christmas). But first, here’s a quick recap:

Sean Moody Sr. (Denis Leary, Rescue Me) and his wife, Ann (Elizabeth Perkins, Sharp Objects) are excited to welcome their son Dan (Francois Arnaud, Midnight, Texas) and his girlfriend home for Christmas. But when Dan arrives solo, it soon becomes clear: He got dumped. Dan’s brother, Sean Jr.  (Jay Baruchel, Man Seeking Woman), still lives at home and works at the local ice rink. Their sister, Bridget (Chelsea Frei, Sideswiped), is a lawyer who confesses to her brothers that she cheated on her husband while traveling for work. And when she confesses the infidelity to him, she winds up staying at her parents’ place with her siblings, just like old times. 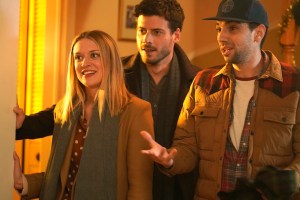 Ann is determined to make the family’s holiday beautiful and fulfilling, though her kids aren’t super into it. But Dan, Sean Jr. and Bridget don’t know that their folks have a secret of their own: Sean Sr. has been diagnosed with breast cancer and is scheduled to have surgery just after the new year.

Complicating matters: During a family party at the house, Dan meets (and quickly becomes enamored of) a jewelry designer named Cora (Maria Gabriela de Faria, Deadly Class). She’s into him, too. The only problem: She’s already dating his cousin, Marco (Josh Segarra, Arrow)… though that doesn’t stop Dan from kissing her while they sit on the front steps of his childhood home.

Dan’s insecurity about his love life makes him desperate, and at one point, he calls his ex-girlfriend and leaves a message saying he wants them to get back together, and he now wants to move in with her. But the moment he hangs up, he confides in Bridget, he wishes he hadn’t made the call. So things are going to get very interesting when, at the end of Night 1, the ex calls Dan, who meets her at the airport.

Now it’s your turn. What did you think of Night 1 of The Moodys? Grade the premiere via the poll below, then hit the comments with your thoughts.