This week on The Flash‘s fall finale, the team races to save Barry from the dark side — just as the looming Crisis races into town.

Following Barry’s dark turn, Cisco activates a Babel force field around S.T.A.R. Labs so nothing can go in or out. Meanwhile, Central City has gone dark, literally, and is overrun by Ramsey’s blood brothers, with Kamilla and Cecile holed up in the latter’s office. When Barry asks Iris to meet him where she said “yes,” Cisco tries to talk her out of it, noting that she could get infected or worse. “In sickness and in health,” Iris replies before breaching to the loft. But what she finds there is a disturbing sight: Ramsey speaking through Dark Flash, inviting her to join his blood brothers, who have become “extensions of one collective body.” Iris refuses, begging Barry, “Come home to me.” Then Ramsey almost has Dark Flash kill her, threatening to phase through her.

An unharmed Iris returns to S.T.A.R. Labs, where Cisco announces that he’s going to shoot radiation at Ramsey and Dark Flash, hopefully zapping them of their lifeblood. Iris is against the plan since Cisco’s new gizmo is untested and could harm Barry. “It doesn’t matter! We’re going to lose him anyway!” Cisco exclaims, adding, “There is nothing left to give up on. Iris, he’s gone. He was always going to leave us.”

Cisco goes through with his plan, but the blast does nothing to weaken Ramsey, who reveals to Cisco that he’s going to use the particle accelerator to spread his lifeblood throughout all of Central City. “I knew I picked the right guy,” Ramsey says before letting Cisco go. That later sparks an epiphany from Cisco — Barry said those exact same words to him when he picked him to lead the team. Cisco and Iris realize that Barry is still alive inside Dark Flash and is trying to tell them how to take down Bloodwork. So when Ramsey and Dark Flash arrive outside of S.T.A.R. Labs, Cisco and Iris lower the force field and translate Dark Flash’s declaration to “let the light in” to mean Allegra needs to hit the particle accelerator with a UV blast. When she does, an antidote spreads throughout the city and Barry returns to his old self.

But the team’s not out of the woods yet: Ramsey somehow morphs into a giant, fleshy monster and attacks The Flash. It’s not until his dead mother appears to him that Ramsey resumes his old form. Turns out Barry let Ramsey infect him so he could bring the doc’s mother out of his mind. After that, the team is able to contain a still mad Ramsey in the MAC that was home to Chester. 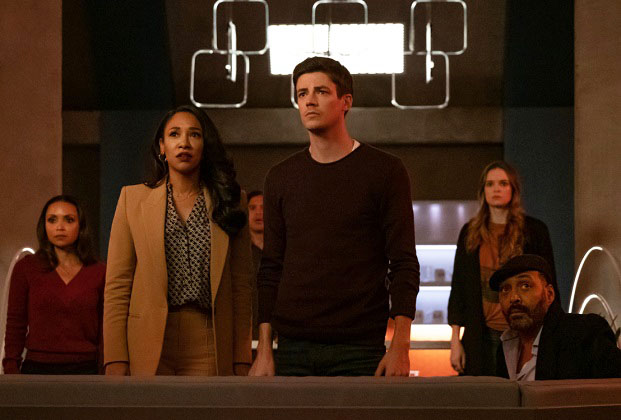 “Now it’s time for our next fight,” Barry says. So much for enjoying this win! As the episode winds down, Barry and the gang are sitting around, waiting for Crisis. (Killer Frost lets Caitlin take the wheel for what’s to come.) They tearfully reminisce about the old days and share what Barry means to them, with Iris revealing that she had Cisco vibe her to the waterfront to watch her and Barry’s first kiss while he was stuck in the speed force.

“Our love story never ends, not even with Crisis,” she declares. “Whether you vanish or… or worse, I’m going to be there with you to the very end, because the only thing more inevitable than Crisis is us.” And just as the clock hits midnight, the skies of Central City turn red.

Meanwhile, the final teaser reveals Nash Wells in the same scene from the end of Sunday’s Supergirl and Batwoman. “For so many years, I’ve traveled across worlds — across the multiverse — to do one thing: kill you. And now, here, you saved my life,” he says to… The Monitor? In return, a voice tells him to “begin your life anew,” offering him untold knowledge, before consuming him in a blinding light.

What did you think of the episode? Grade it below, then hit the comments!