How mad will Prodigal Son‘s Malcolm be driven while in captivity? Apparently, mad enough to break his own hand. With a hammer?!

At the end of the Fox drama’s fall finale, Tom Payne’s tortured profiler was kidnapped by the Junkyard Killer, a murderer he’d been pursuing for weeks (who also has ties to Malcolm’s childhood). After getting knocked unconscious, Malcolm was dragged off to an unknown location — and TVLine has an exclusive first look at his imprisonment.

As seen in the photo below, a shackled, screaming Malcolm — who is seemingly trapped in an actual dungeon — looks prepared to do serious damage to one of his extremities. (Not that this comes as a total surprise: Malcolm literally cut off a man’s hand in Prodigal Son‘s pilot episode.)

Series co-creator Chris Fedak recently told TVLine that the winter premiere is “a gigantic, scary, panic attack of an episode,” adding that Malcolm “will not get out unharmed, psychologically or physically” from his captivity.

“If you think we have done some crazy s—t on this show, we are about to take it to another level of disturbing,” Fedak added. “It’s a ludicrous, fun, crazy episode.”

Meanwhile, the midseason premiere will find the FBI and NYPD banding together to save Malcolm, while Ainsley and Jessica search through their memories of the past, “hoping to find some clue as to where Malcolm could be hidden,” the logline reads. Gil will also come face-to-face with Martin Whitly, while the Junkyard Killer reveals new details about that camping trip.

Prodigal Son returns Monday, Jan. 20 at 9/8c on Fox. Scroll down for our exclusive first look, then drop a comment with your thoughts. 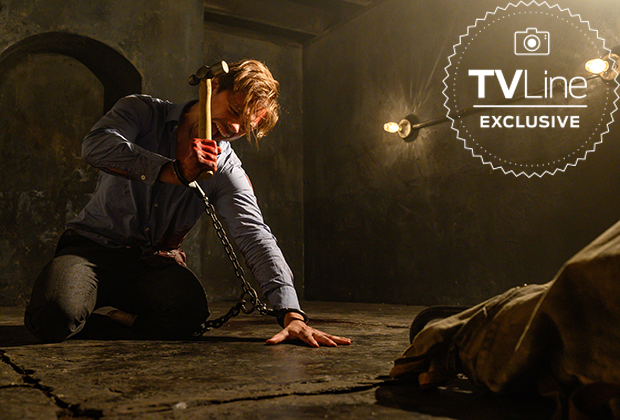