Malcolm Bright went looking for answers about his childhood during Prodigal Son‘s fall finale… and they quite literally smacked him over the head.

On Monday’s installment — the last until Jan. 20 — Tom Payne’s profiler assisted with a new NYPD case, a double homicide that claimed the life of a well-liked cop. Though Bright initially thought he was pursuing a brand-new perp, he later discovered that the elusive Junkyard Killer was also responsible for these latest deaths.

With the help of a former NYPD detective, Bright chased down the Junkyard Killer (real name: John Watkins) and got tantalizingly close to capturing him… until the murderer hit Bright over the head, knocked him out cold and dragged him away to an unknown location. (We also finally glimpsed the Junkyard Killer’s face, which triggered an unsettling childhood memory for Bright. As if there’s any other kind.)

But it gets even more complicated for Bright. His pursuit of the Junkyard Killer was largely unsanctioned by the NYPD — and at the time of his kidnapping, the team had no idea where he’d been for the last few hours. TVLine spoke with series co-creators Chris Fedak and Sam Sklaver, who offered insight on that cliffhanger, and the “disturbing” events that will unfold in January after Bright’s abduction.

TVLINE | This is the first time we’ve really seen Bright in legitimate, life-or-death peril. He’s typically able to talk his way out of danger, but not this time — why was that the right storytelling move for this episode?
FEDAK | We knew we were building toward our winter finale, and we want to up the stakes with each episode. This felt like the perfect time to put Bright not only in the most physical danger we could imagine, but also psychological danger. Our show operates on two levels: There’s what’s going on in the present, and there’s Bright’s memories. When we knew that he was going to finally see the face of the Junkyard Killer and have that confrontation, we knew he’d have a psychological reaction to it that would be paralyzing. We really wanted to build those two levels at the same time.
SKLAVER | The Junkyard Killer is different from other killers we’ve met throughout our season. This is someone who’s been operating as a killer for 20 years, undetected, with the tutelage of Martin Whitly. This is a worthy adversary. This is not a normal killer or criminal. This is really someone who’s worthy of our hero, and that’s why he is able to get Malcolm into this position. He’s one of the best. And we just have to hope that our profiler is one of the best, as well.

TVLINE | Is there part of Malcolm that wanted this to happen? Maybe he didn’t plan to get knocked out and kidnapped, but the Junkyard Killer has information about his childhood that he desperately wants. Was he perhaps inviting this dangerous situation on purpose?
FEDAK | There is definitely a drive on Bright’s side of things to understand his past and understand who he is. He will make dangerous decisions. He will put himself in peril. When it comes to understanding himself, he will put himself out there. So you’re absolutely right: In those final minutes, there are safer ways to handle that situation, but Bright knows he needs to confront that guy. He has no intention of getting knocked out and getting taken, but he knows that he will put himself in harm’s way to learn secrets about himself.
SKLAVER | He’s kind of like one of those free solo rock climbers. Bright just doesn’t have the fear that you or I do about our own self-harm, because he’s already been harmed so much that he’s really just after catching criminals and stopping killers. That’s what’s driving him. He’s not happy to be taken by the Junkyard Killer, but it’s better than losing the Junkyard Killer into the wind, you know? 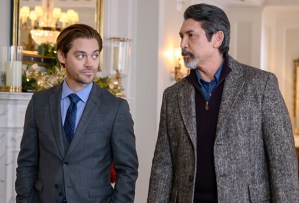 TVLINE | What can we expect when the show returns? If the Junkyard Killer has Malcolm in captivity, what’s Malcolm’s mental state at that point?
FEDAK | Not. Good. [Laughs] Bright is doing two things: He’s trying to figure himself out and he’s trying to escape, but there’s a third thing, which is that he’s fascinated by the minds of serial killers. He’s also trying to understand this guy. It’s very much a duel when we come back into the story. It is a gigantic, scary, panic attack of an episode. If you think we have done some crazy s—t on this show, we are about to take it to another level of disturbing. It’s a ludicrous, fun, crazy episode.

TVLINE | And yet, Malcolm has already had such a tenuous grip on reality this season. Will this encounter with the Junkyard Killer break him mentally, even if he gets out physically unharmed?
FEDAK | I will say this: He will not get out unharmed. Psychologically or physically.
SKLAVER | But the good thing about Malcolm Bright is there have been many points in his life where he should have been destroyed, and he wasn’t. There’s just something in Malcolm that will always fight. People aren’t broken; something breaks them. That’s what we say in our pilot. And Malcolm’s always trying to fix the thing itself. He’s going to therapy, he’s taking his medication, he’s doing his daily affirmations. It is fair to say that he is beyond pushed to the brink. But Bright is not someone who will ever give up on himself, so we’re excited to watch that journey that he’ll go on.
FEDAK | And Tom [Payne] is so amazing going through that struggle. We knew from the get-go that in every episode, he’d be at 11. And now, we’re finding gears to take it to 12 and 13.

TVLINE | We also haven’t seen Martin in a while, now that he’s in solitary confinement. If we catch up with him soon, where’s his head at in the wake of Ainsley’s interview?
FEDAK | Not. Good. [Laughs]
SKLAVER | We can promise that we’re seeing Martin in Episode 11 when we come back. He’s not in a great place, and neither is his son.
FEDAK | When his son goes missing, it’s a great opportunity for us to do a scene we’ve been looking forward to for a while, which is getting Michael Sheen and Lou Diamond Phillips in the room together.
SKLAVER | We’re also excited about how much deeper we’re going into the Whitly family — how much time we’ll spend in 1998, learning more about the case that was built against The Surgeon. It was the trial of the century when Martin Whitly was being tried in New York, and telling that story — all the way through how he ended up at cushy Claremont Psychiatric — is something that we’re really, really excited to tell. I think fans are going to love getting to see Martin when he was at the height of his power.

What did you think of Prodigal Son‘s fall finale? Grade the episode in our poll below, then drop a comment with your reactions!