This Titans casting news is pretty literally “out of this world.”

TVLine has confirmed that Damaris Lewis — who appeared in a pair of Season 2 episodes as Koriadn’r aka Starfire’s Tamaranean sister aka Blackfire — has been promoted to series regular status for Season 3 of DC Universe’s flagship series. 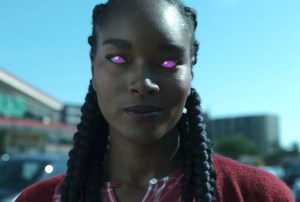 Lewis’ upgrade should of course come as little surprise to those who have already watched Titans‘ sophomore finale, which released on Nov. 28. (Spoiler alert ahead!) As seen in a final “bonus” scene, a mild-mannered mom had just tucked her kids into the car and loaded their groceries into the trunk when a glob of space goo splatted on the side of her neck. Moments later, the woman transformed into a smirking Blackfire — akin to how Tamaran’s not-so-beloved queen previously used royal guardsman Faddei (Robbie Jones) as her host, during an earlier visit to Earth.

Other Titans casting questions, however, remain to be resolved in the wake of said finale, given what happened to at least three characters who died, seemingly perished or left town. (Read our recap; TVLine readers gave the finale an average grade of “B-,” while  Season 2 as a whole earned a “B.”)